Calvin University’s ‘house band’ returned to Grand Rapids on Friday for a moving show that was all about honoring Heffner, who’s retiring as student activities director and Calvin’s concert honcho. 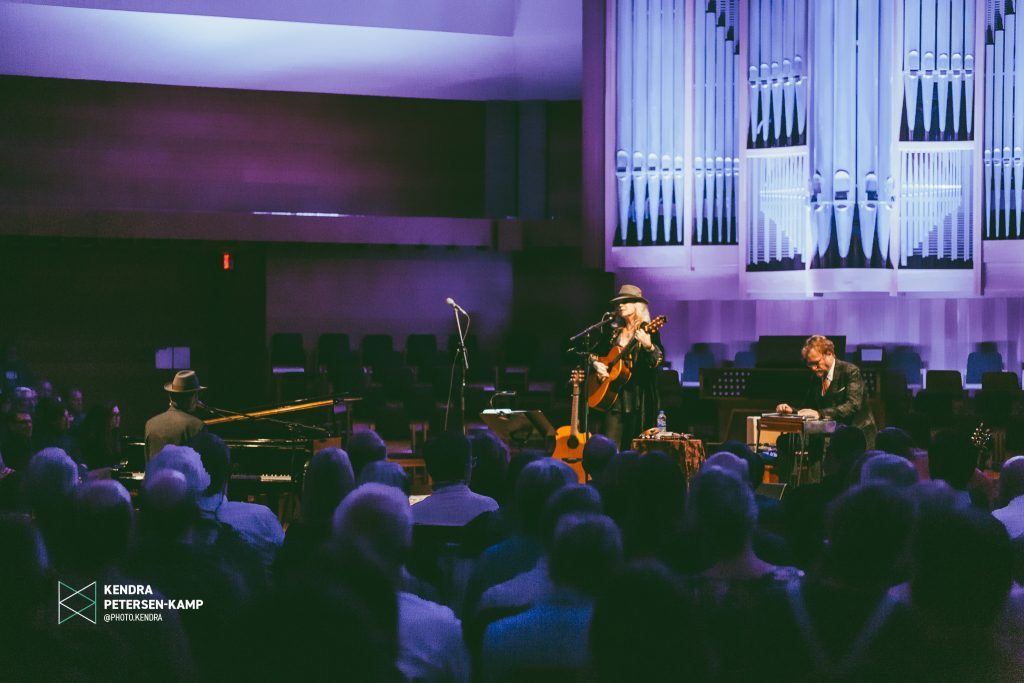 As singer Karin Bergquist of Over the Rhine put it during the band’s concert Friday at the Calvin University Chapel: “We’re really here to celebrate Ken’s legacy.” 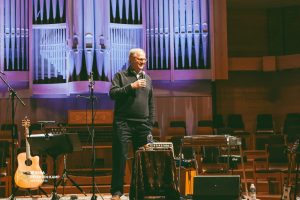 Man of the Hour: Ken Heffner earned a standing ovation from the concert crowd before introducing the band. (Photo/Kendra Petersen-Kamp)

Many of those concerts — more than 16 of them — have involved the Ohio indie-folk duo Over the Rhine, the first group booked by Heffner back in 1993.

In introducing the folk/Americana band on Friday, Heffner said it was only appropriate that Over the Rhine — featuring Bergquist and Linford Detweiler — had “book-ended” his career at Calvin. Bergquist, Detweiler, Calvin students, faculty, alumni and friends celebrated that career afterward during a special post-show reception that featured posters, newspaper clippings and other displays recapping all those years of concerts.

There was even a mid-concert, on-stage interview session during which Heffner — who’s led lots of chats with touring artists over the years — had a chance to once again lead thoughtful discussion about Over the Rhine’s influences and songwriting. 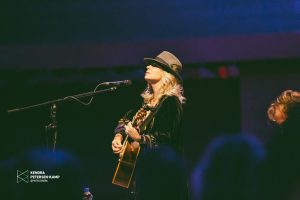 More than anything, Detweiler and Bergquist (accompanied by pedal-steel guitarist Eric Heywood) proved their songcrafting mettle, ever cognizant of the way their harmonies enhance their melancholy luminescence, from tunes gracing their most recent album, “Love & Revelation,” to holiday-hued fare (“Broken Angels,” “Blood Oranges in the Snow,” “All I Ever Get for Christmas is Blue”) that ranks among the best of contemporary seasonal music.

Despite the staid sanctuary setting, there were times on Friday when Bergquist took on the role of a smoky-bar chanteuse for classics such as “All I Ever Get for Christmas is Blue” and “Trouble.”

And during the encore, the piano- and guitar-playing Detweiler even took a surprise turn at the chapel organ for a haunting rendition of “Latter Days,” with Bergquist adding poignant vocal touches throughout.

But the band’s return to Calvin this time around really was about paying tribute to a guy who’s put the university on the musical map.

“We’re so grateful for him,” Bergquist said near the end of the show. “I hope you appreciate the community you have here, and a lot of that is because of Ken.”

PHOTO GALLERY: Over the Rhine and Post-Concert Reception at Calvin University
Photos by Kendra Petersen-Kamp 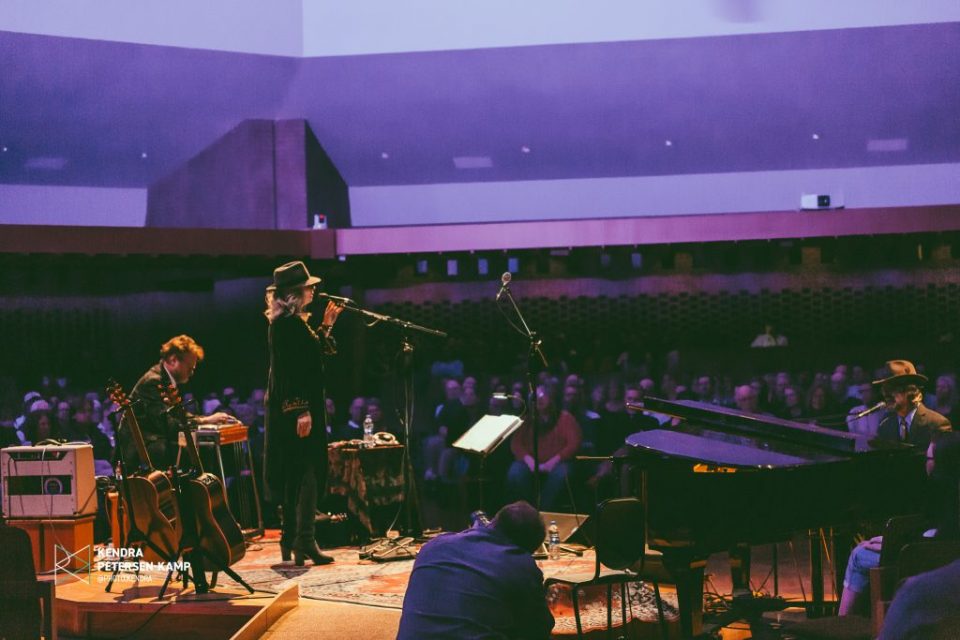 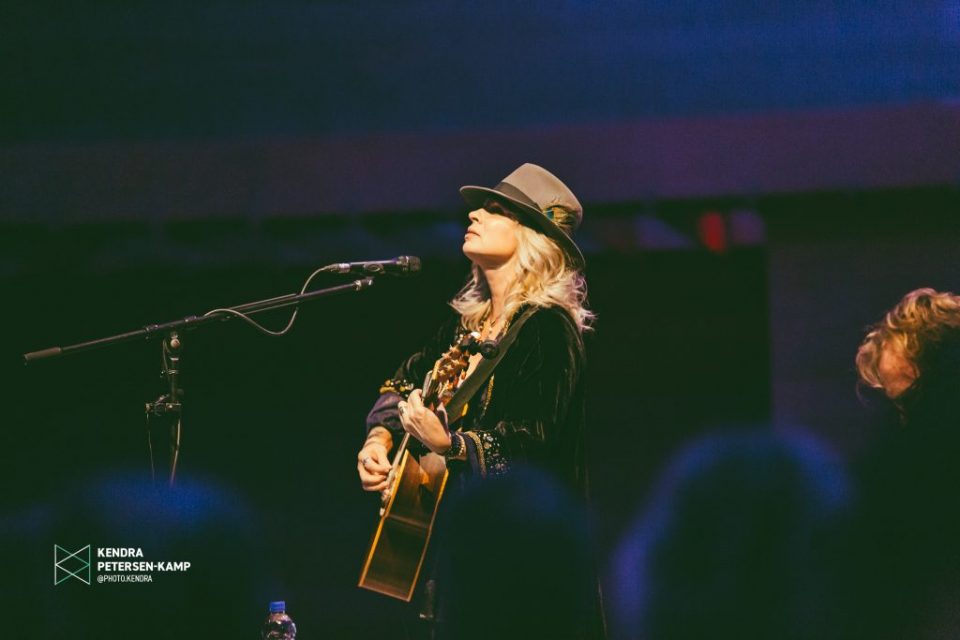 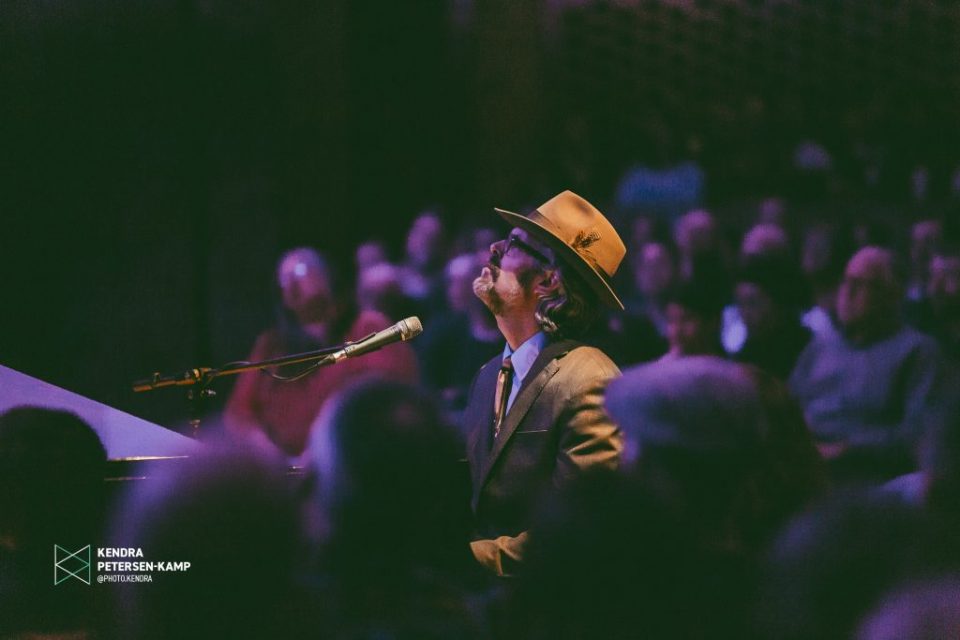 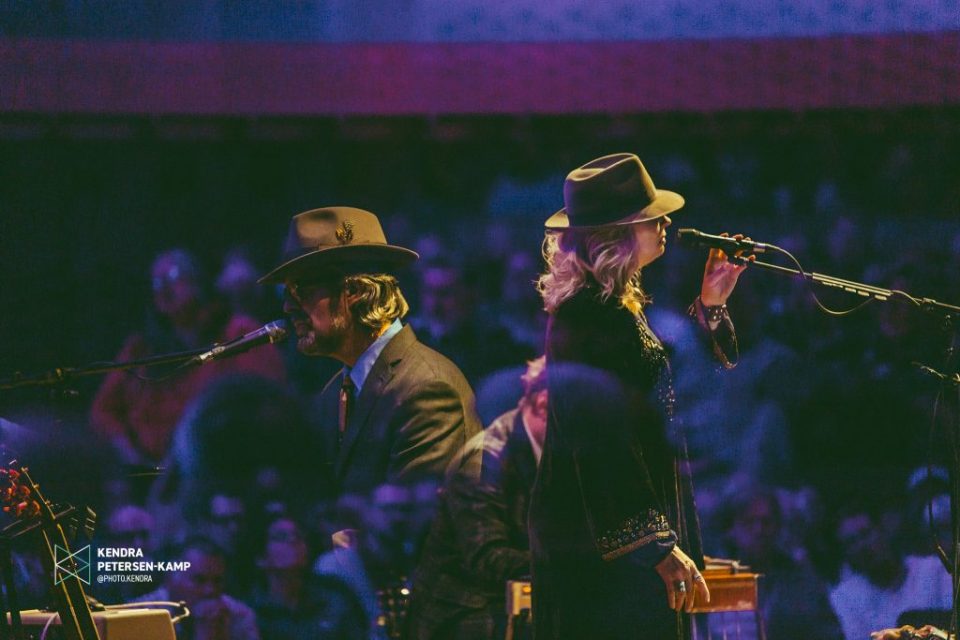 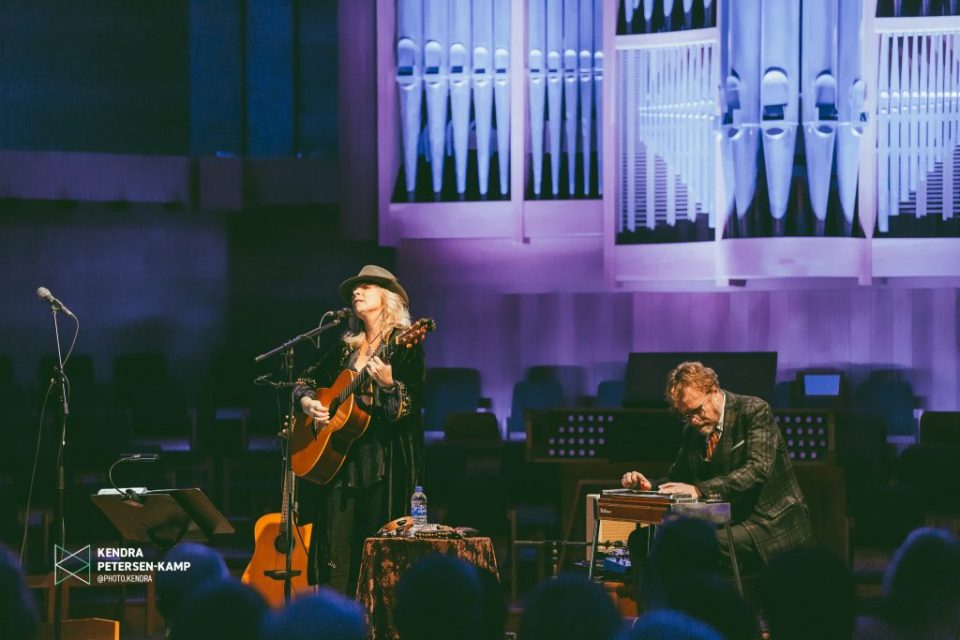 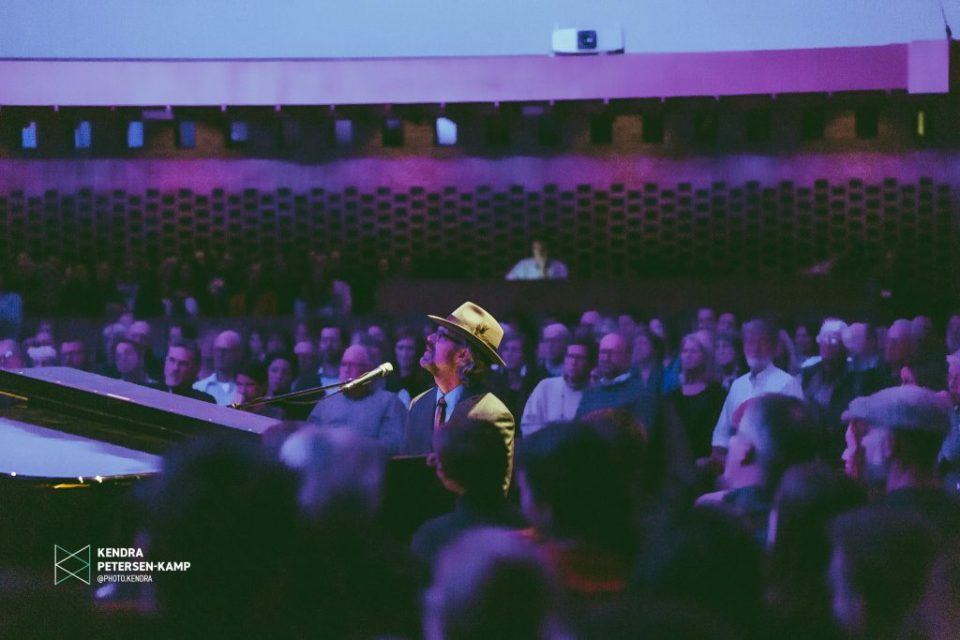 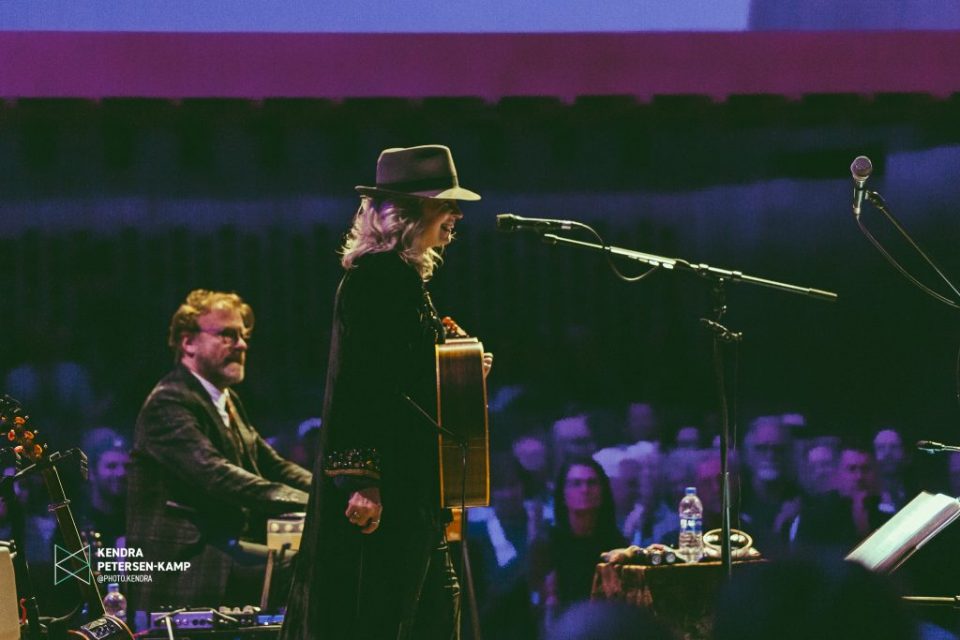 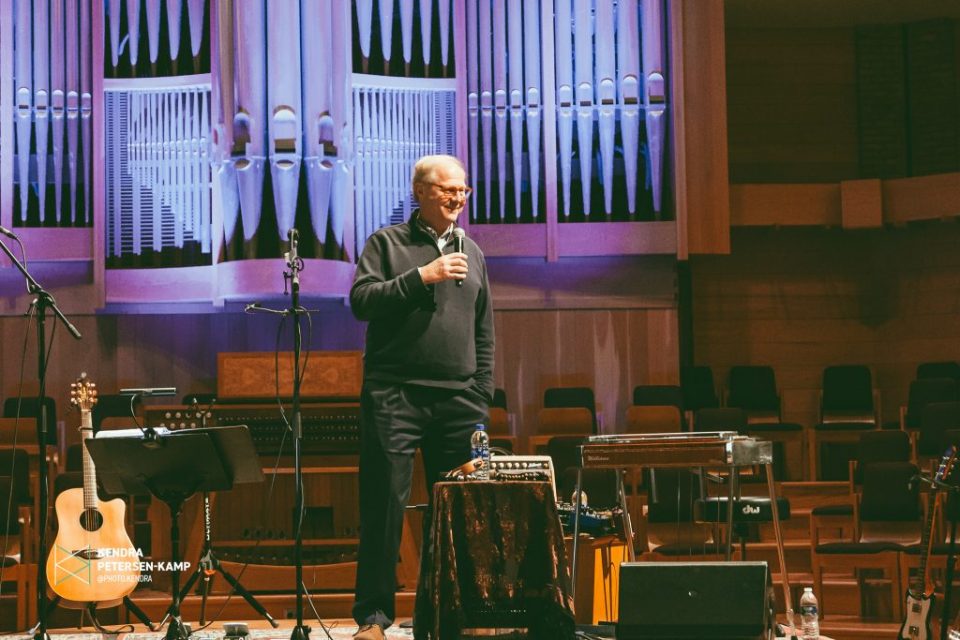 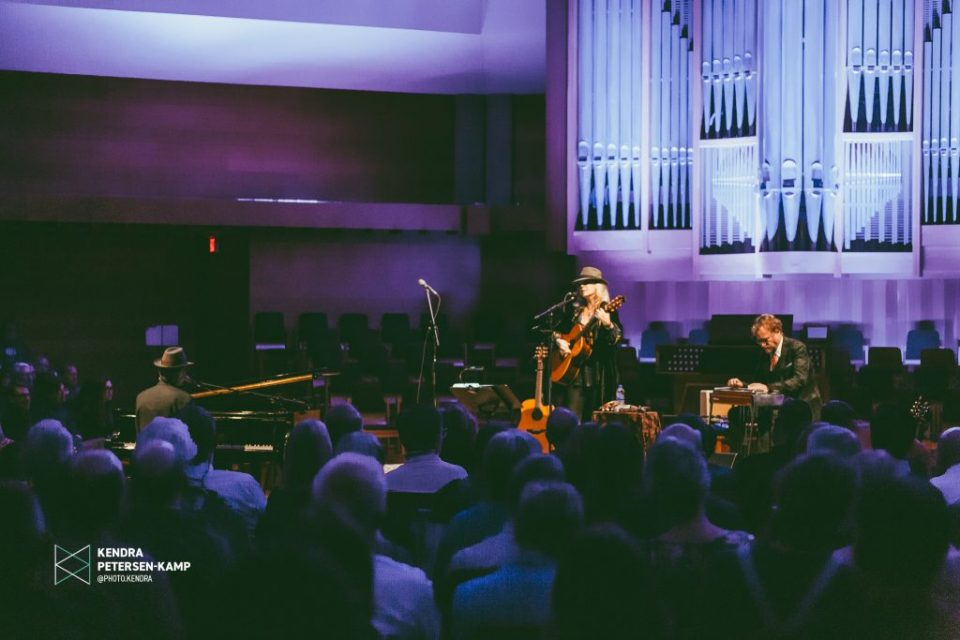 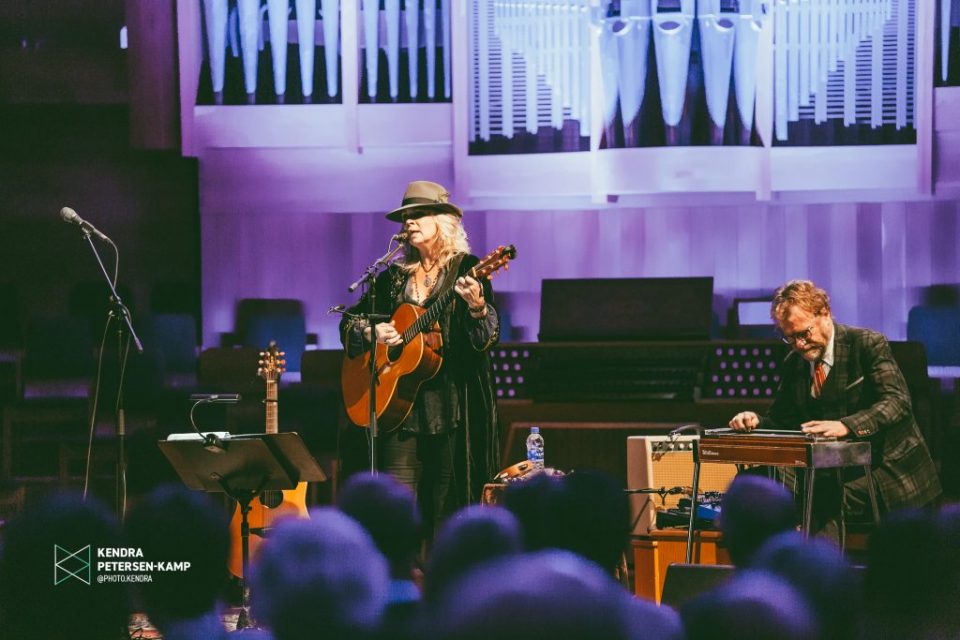 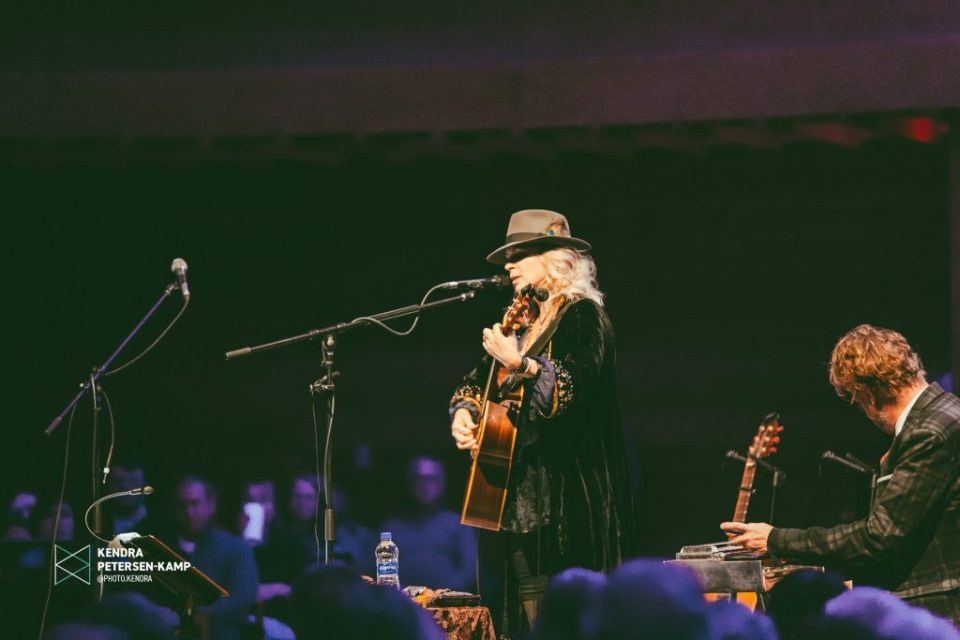 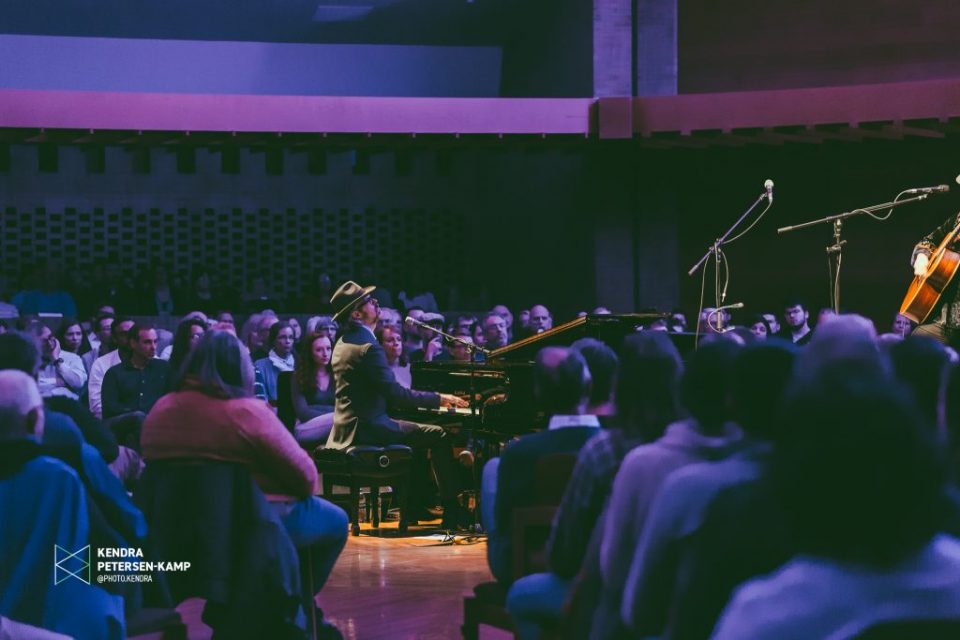 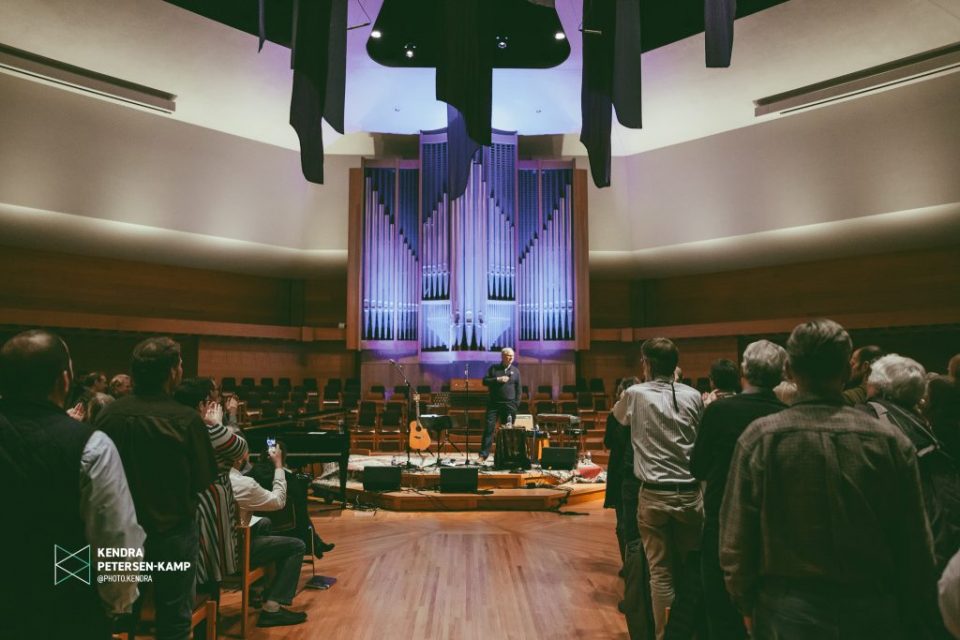 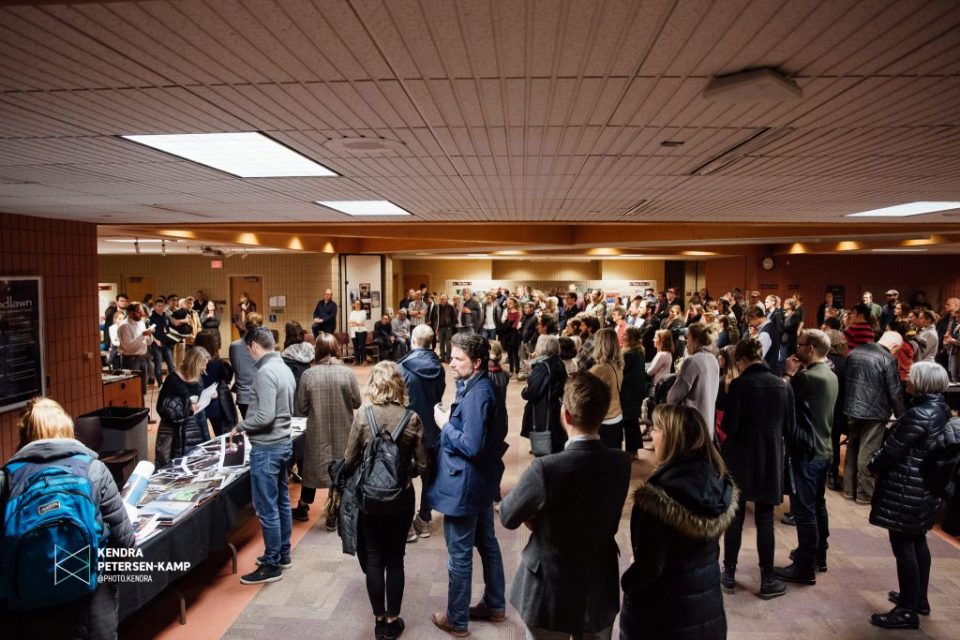 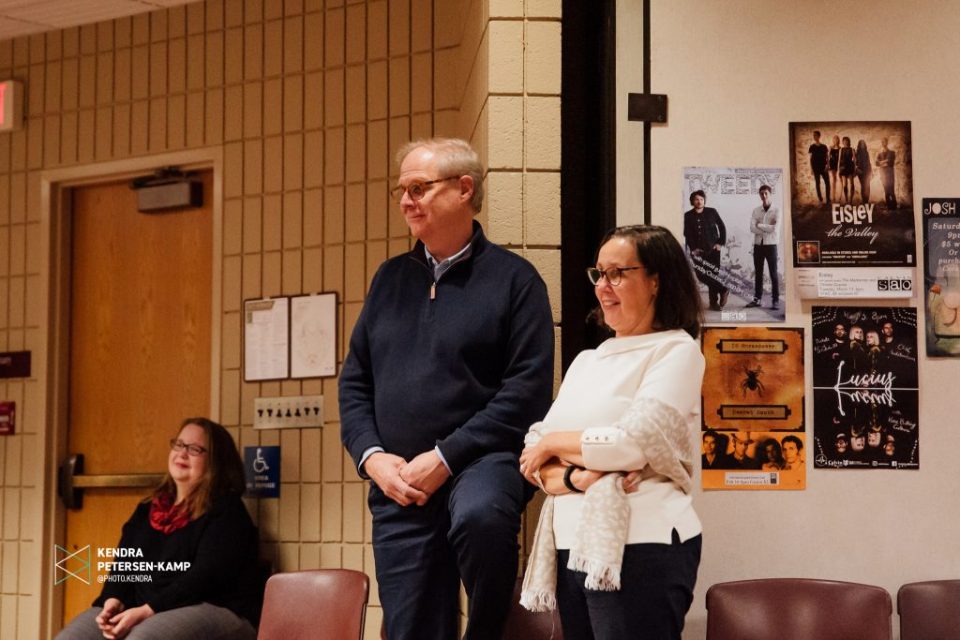 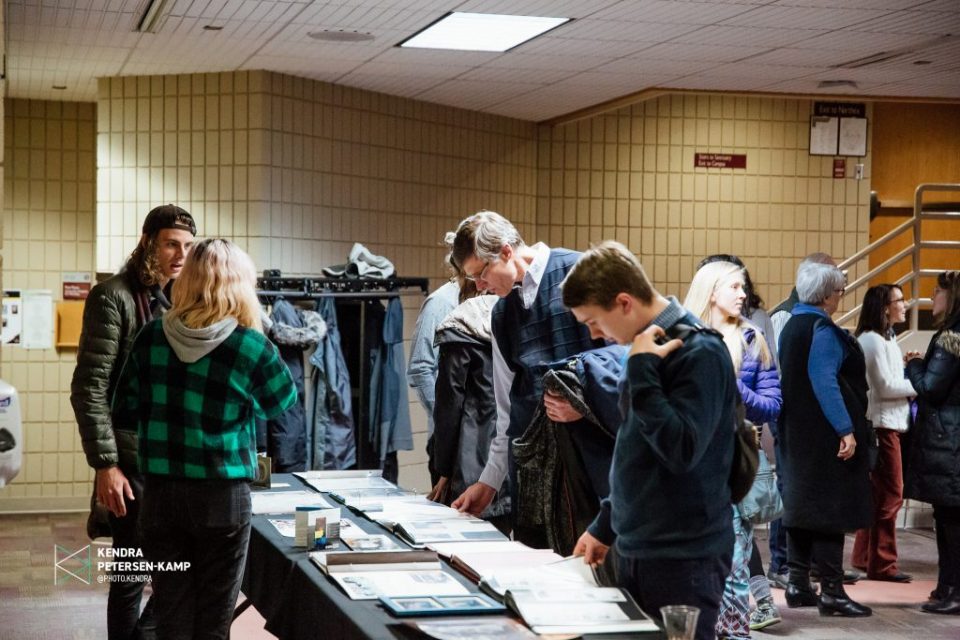 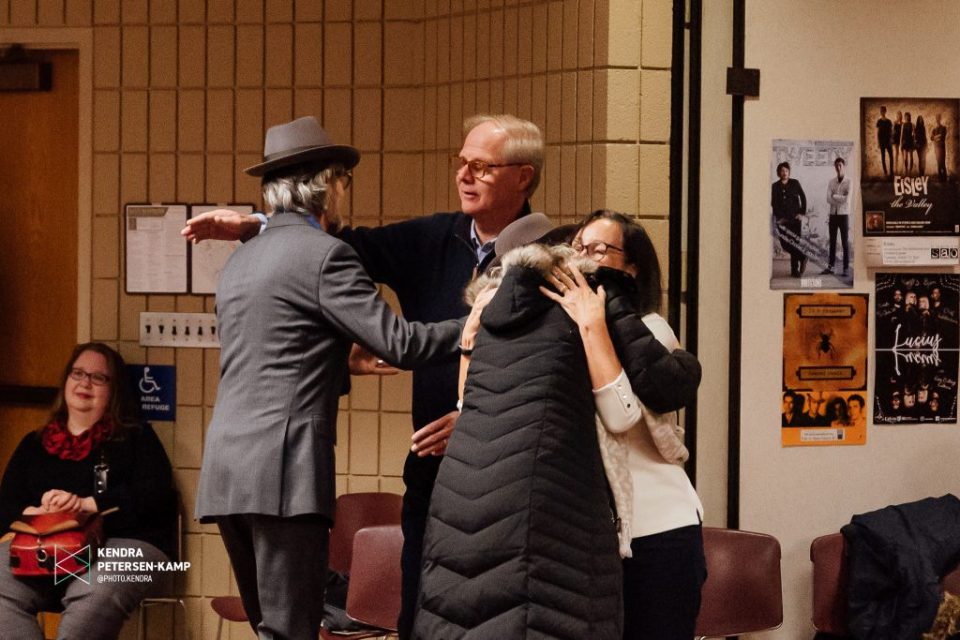 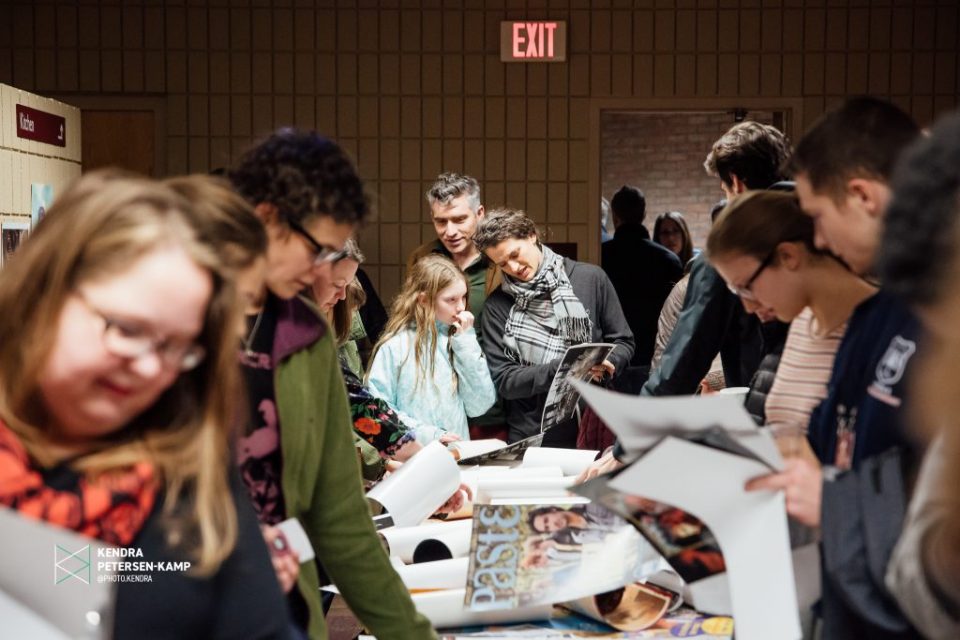 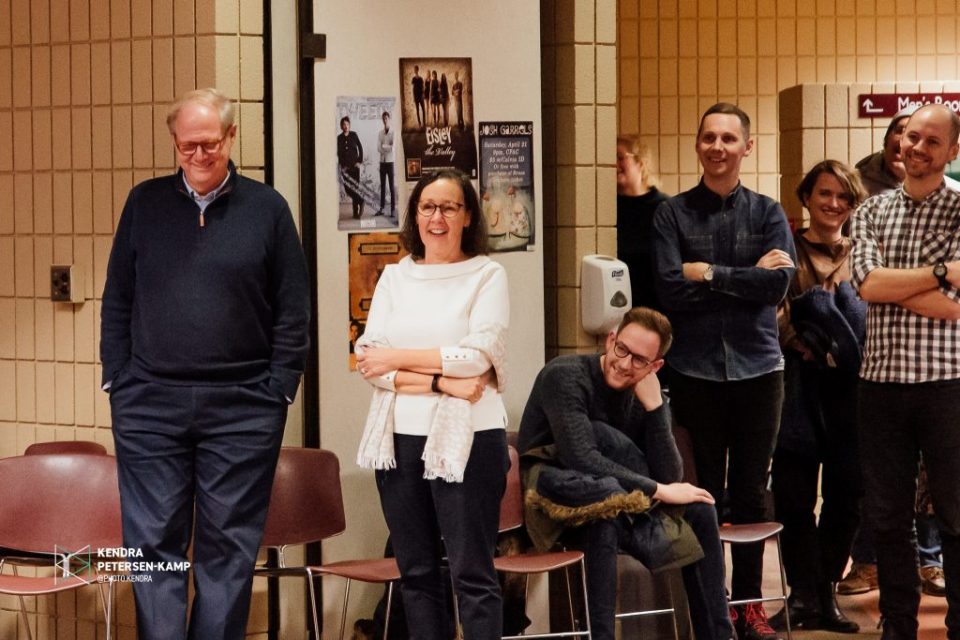