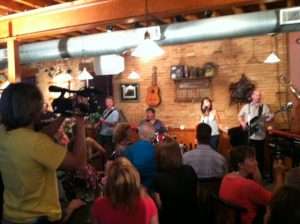 Mid-Life Crisis runs through “Life’s Too Short” while videographers shoot the action.

Sitting through a camera shoot for a music video may be repetitive, but it sure can be a whale of a good time – especially when the song is catchy and the band hosts an open bar.

The Sunday afternoon gathering of ebullient fans at Grand Rapids’ One Trick Pony for the Mid-Life Crisis video shoot for “Life’s Too Short” (a song the band has entered in the upcoming ArtPrize competition) was designed to look like a fun Saturday night gig, with black drapes drawn over the windows.

Several dozen fans packed into half of the bar/restaurant (which is normally closed on Sunday) to sing along, cheer, shake tambourines and dance as the six-piece classic rock band lip-synced through the original tune about a dozen times while director Eric Nacke and cameraman Josh Knight documented the action.

Nacke, who handles video projects for Van Andel Arena and DeVos Hall, actually did a video shoot with Motley Crue in Grand Rapids a couple of years ago. 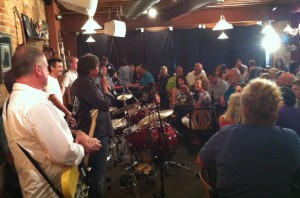 Steve “Doc” Bloom directs traffic, so to speak, before the video shoot begins.

Grand Rapids Mayor George Heartwell, MLive.com’s John Gonzalez and other friends of the band, aka FOBs, were on hand to provide the “enthused fans” backdrop for the upbeat song written by drummer Steve “Doc” Bloom and his daughter, Alison.

And believe me, a couple of hours into that open bar, plenty of them shook their tails uber-enthusiastically to the song’s “wag more, bark less” line.

Parts of the video also are being shot at Mackinaw Harvest Music studios in Grand Rapids where the song was recorded. You can listen to part of the tune at the band’s website here, and look for the video to be released in mid-September.

You can also watch some behind-the-scenes video from an earlier shoot at Mackinaw Harvest here.