Mid-November brings another review roundup of new releases by West Michigan artists covering a dizzying array of genres. Read the reviews, listen to the music. 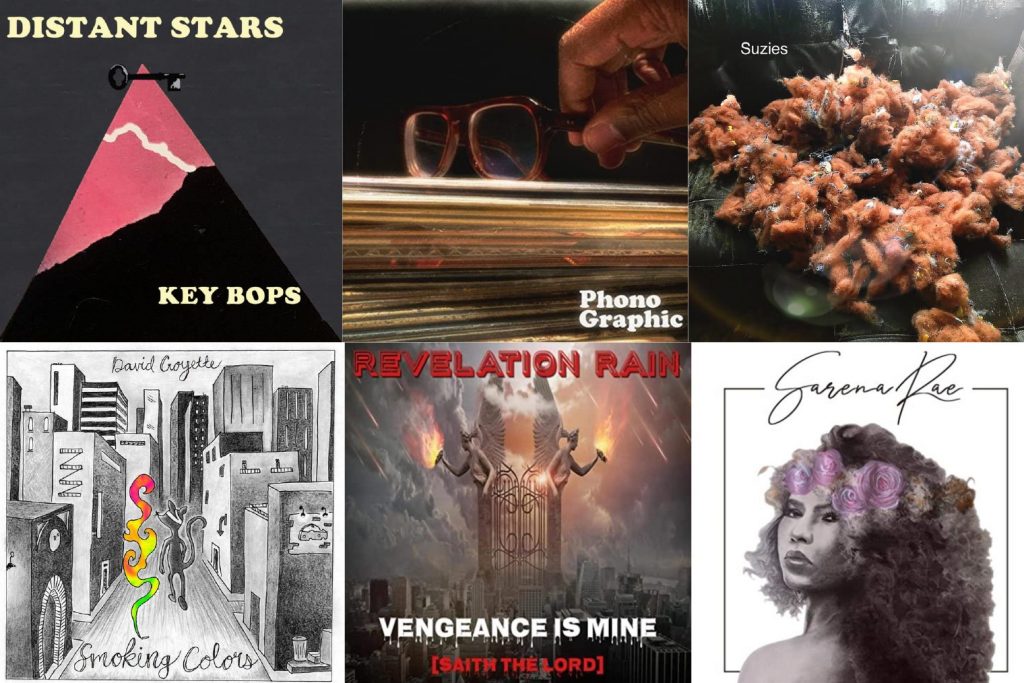 Dizzying Array of Genres: This week’s batch of albums reviewed at Local Spins.

Mid-November has arrived in what’s been an unprecedented and silent year on the concert front but a satisfyingly busy one in terms of new releases by Michigan artists.

Check out the reviews and listen to tracks from each album. And browse previous Local Spins album reviews online here: https://localspins.com/category/album-reviews/ 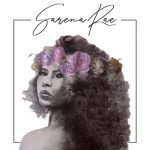 What Stands Out: Each track on “Heaven” is a moment for the listener to understand Sarena Rae, both as an artist and human being. The album immediately starts to groove with “Caught in Between,” a song that lets you sink into a soulful backbeat while hearing Sarena detail her experience living life between two worlds as a biracial individual. I personally can empathize with her lyricism – compelled to bridge the social gap between white and black friends while feeling pulled between two identities that American media depicts as “cultural norms” for different race groups. She adds wonderful tension, shifting to a more active harmonic progression that abandons the expectations set forth at the beginning of the tune, mimicking the struggle depicted in the lyrics. Terrence Massey (trumpet), Caleb Elzinga (tenor sax) and Aaron Hettinga (trombone) punctuate the change in mood with their horn stabs. All the while, Robert Pace (bass), Joe Hettinga (keys/engineering), Kevin Kozel (guitar) and Scott Pellegrom (drums) hold down the groove with expertise and ease, showing their strength as studio musicians. On “Fatherless,” Sarena opens up navigating life in a single-parent household and wondering what she could have done to drive her father away. The tune is set to a Motown-style ballad in a major key, as if to musically reassure the listener that she has learned to reconcile these past transgressions in her home life and move forward with a renewed sense of self. Avalon Cutts-Jones, Clarence Xavier and Taurean Pruitt work effortlessly together on supporting vocals, blending the strength of a background in live performance with their gospel upbringing. Finally, we hear beautiful choral arrangements washed in reverb on the title track, with engineering that yields a spacious, warm environment for the chorus of Sarenas as a message of faith and healing. The song wonderfully keeps vocals as the focal point, adding piano and tambourine only to make great use of space and subtle markers within the song’s overall progression. It’s a wonderful ending to three distinct experiences on this EP.
Digging Deeper: Heaven shows that Sarena Rae is open to sharing her life’s story with the listener through different, memorable song arrangements on her debut – a bold step for any artist. Whether jazz-focused or gospel-rooted, she proves her flexibility and capability as an artist, with an ability to draw from the right people to realize her creative vision.
Perfect For: Anyone who loves soulful music spearheaded by a talented singer with a compelling story, one that expresses itself in distinct, memorable ways. – Dutcher Snedeker
Website: https://sarenarae.com/
Listen: “Heaven” 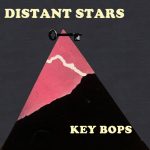 What Stands Out: “Key Bops” is a strange brew of irreverent, jolly funk. But there also are hints of countless influences on the music beyond that – from glam rock to hip hop. “Duel of Head & Heart” is the EP’s standout track. Immensely catchy with exquisite production and playing, the song boasts a quick and quacky clavinet, drumming syncopated with lead vocalist Jakey Thomas’ heartbroken narrator, Prince-inspired rhythm guitar chops … and that’s just the chorus. Every part of the song is a hook.
Digging Deeper: “Taylor” is the EP’s odd outlier, a twisted rap-rock song with old-school hip hop sounds, wah-wah pedal guitar riffs and a wall of synthesizers. On “One-Hand Clap,” Distant Stars’ ’80s influences are on clear display with a shred guitar solo, gang vocals, brass stings and even a call to action: the aforementioned one-hand clap. In a year of hardship for many with some correspondingly dark music coming out, “Key Bops” is a refreshingly fun respite.
Perfect For: Fans of Prince, Chic, ’80s rock and convertibles. – Devin Anderson
Website: https://ajourneytodistantstars.bandcamp.com/
Listen: “Duel of Head & Heart” 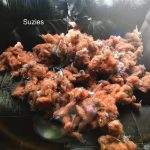 What Stands Out: Paper-shredder guitar tones and a flood of reverb. The latest from Grand Rapids psychedelic garage rockers Suzies is a hard-rocking wrench in the sonic palette of music in 2020. Thumping drums and bass on “Bubble Driver” kick off the album. The song’s surf rock aesthetic is driven to the edge with an eerie lead guitar and lethargic vocals. The longer that riffs and lyrics drone, as they do for nearly eight minutes on the likes of “I Close My Eyes Up,” the more the album’s distinctive style makes sense. Even the album’s cover, a photo of stuffing bulging out from a torn-up couch, queues up the listener for something brashly different. It’s like being deprogrammed. Far from background music, it seems the only proper way to play this album is very loud – whether it’s out of a phone speaker or a hi-fi system.
Digging Deeper: The disheveled poise of “Miller Lightning” unfolds largely as a function of its expert production by Tommy Schichtel at Goon Lagoon Studios in Grand Rapids. The analog, “no computers” approach to making music is increasingly rare these days. Most young music fans, myself included, don’t know what a tape machine is or does. That sign of the times makes the straight-to-tape sounds out of Goon Lagoon all the more head-turning. Upbeat, dynamic and wrenching, “Schlumpt” is another standout track.
Perfect For: Working through frustration; guitar tone-chasers. – Devin Anderson
Website: https://suzies.bandcamp.com/
Listen: “Schlumpt” 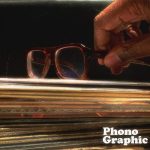 What Stands Out: “PhonoGraphic’s” production value is immediately welcomed, with beats and samples that fuse the classic sounds with a modern flavor. There is a wonderful blend between the electronically crafted and the live musician feel, no doubt drawing from iconic beat makers like J Dilla or Pete Rock. Each track is around a minute long, spritzing you with different sonic perfumes that are pleasant to enjoy and that blend together to showcase the complete “PhonoGraphic” package. Transitions between tracks are so seamless you forget that you’re listening to little vignettes. With 25 tracks, there are so many great moments to come back to as a listener: “Sometimes, I Love You” is sweet and endearing, “Take 5” and “Finally, Forever” draw from familiar, nostalgic sampling sources, and blocks of tunes groove to the same tempo to feel like one long vibe. It’s an album hard to stop once it gets rolling, and you’ll just want to loop it back once it’s done.
Digging Deeper: The spread of Black American Music referenced or arranged on this record cannot be understated, from funk to soul to hip hop to jazz and back again. It feels like you’re stepping into a cultural museum, glancing at a brief moment with past BAM icons interacting with other artists and sounds that span generations of creative talents. The attention to detail in the arrangement of each snapshot paired with the larger progression of tunes is so aesthetically pleasing, like being invited into one’s home and treated to several distinct courses that all complete the meal. This is music for the spirit, where you feel the presence of artistry among the reverence for cultural icons.
Perfect For: Cruising around town and vibing off of the neighborhoods, windows down and nowhere pressing to be. – Dutcher Snedeker
Website: https://www.facebook.com/Troy-Ceasar-Music-2272669019670735/
Listen: “PhonoGraphic” 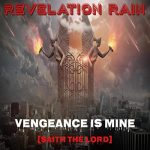 Revelation Rain
“Vengeance Is Mine (Saith the Lord)”

What Stands Out: Recorded and released barely a month after the band’s formation, “Vengeance Is Mine” marks the grinding, aggressive debut by Rockford Christian metal outfit Revelation Rain. It’s a record steeped in hard rock culture and a nod to everything that made metal great in its heyday: grandiosity, heaviness and straightforward riffage.
Digging Deeper: On “Vengeance,” band members clearly sport an appreciation for the classics, wearing their love for Iron Maiden and Black Sabbath on their sleeve. But there’s plenty of modern influence as well, with the occasional growl keeping the record firmly grounded in the 21st century. Tracks like “Night Falls Fast” are good examples of how the band maintains this mood. Revelation Rain’s two guitarists, Rob and JT, also strike a nice balance between the rhythm and lead parts. Neither one overplays, and both sound comfortable with their role in the music rather than competing for musical space.
Perfect For: Fans of hard rock and metal, both old and new. – Devin Dely
Website: https://www.revelationrain.net/
Listen: “New Kind of Man” 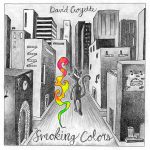 What Stands Out: Honest songwriting and unrestrained self-expression are immediately apparent when listening to metro Detroit native and Grand Rapids musician David Goyette’s “Smoking Colors.” The debut album – written and performed almost entirely by Goyette himself – showcases his moods and creativity. Though occasionally melancholic and melodically wistful, Goyette’s brand of upbeat pop-rock resonates with hope and joy. Confident and striking transparency in the songwriting glows all the brighter with detailed, fully realized arrangements. There’s particularly tasty ear candy in Goyette’s piano playing, which anchors most of the album.
Digging Deeper: Grand Rapidians will get a kick out of the optimistic and pop-rocking “44th Street,” which seems to reflect on Goyette’s move to West Michigan from the Detroit area. Recognizing that Goyette plays it all – the wailing organ, groovy walking electric bass and skillful saxophone solos – make it all the more appreciable. On the undeniable love song, “Sing Tonight,” the opening guitar hook feels more epic each time it comes around. The album comes to a close with the mammoth “Won’t Go Home.” The near 10-minute track begins with a foreboding piano line and booming drums. It evolves, slowly but surely, into a deeply emotive song about coming to grips with life’s uncertainty.
Perfect For: Easy listening and moments of reflection. – Devin Anderson
Website: https://davidgoyette.bandcamp.com/
Listen: “44th Street”