For this popular Southwest Michigan band “it kind of feels like the first album in a new chapter.” The group stages a CD-release show Friday at Old Dog Tavern. 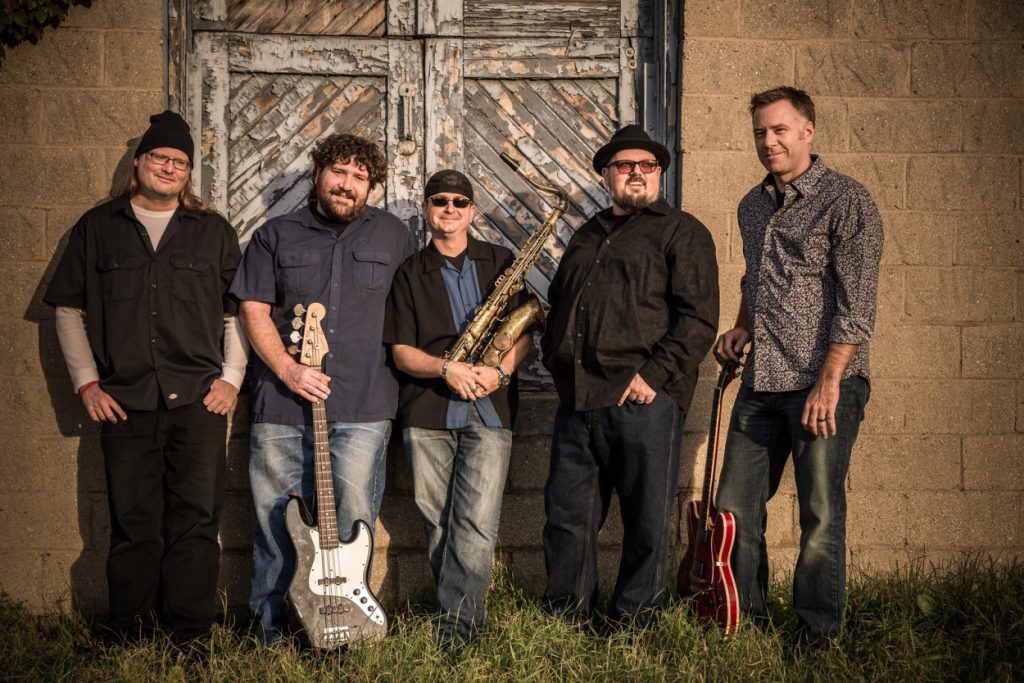 Blues in a ‘Different Direction’: The Out of Favor Boys host a CD-release show in Kalamazoo.

THE ARTIST: Out of Favor Boys
THE MUSIC: Contemporary blues
WHERE YOU CAN SEE THEM: 9 p.m. Friday at The Old Dog Tavern in Kalamazoo; June 24 at the Marshall Blues Festival; June 27 as part of the Rogue River Blues Series in Rockford; July 6 as part of the Felt Mansion Concert Series in Holland; July 16 at the Kalamazoo Blues Festival

Kalamazoo’s Out of Favor Boys, the former house band at Wonderful’s Funky Basement and the city’s 411 Club (both of which have closed), is getting set to release their fourth studio album, and fifth overall.

The self-titled work, which takes a bit of a turn from previous releases, will be celebrated at the band’s CD-release party on Friday at Old Dog Tavern in Kalamazoo. The gig, scheduled to be outdoors in the spacious beer garden, may move indoors if the thunderstorms predicted in the weekend forecast come to fruition. 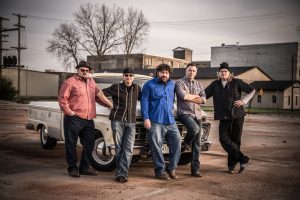 Recorded in Chicago: The Out of Favor Boys’ new album was produced by Pete Galanis.

You can’t have thunderstorms without lightning, however, and that’s exactly what this quintet has captured in a bottle with its latest release.

Influenced by the likes of Anders Osborne, Tab Benoit, Eric Lindell and Robert Cray, the band has taken its once traditional blues sound and transitioned to more of a contemporary style with a stronger focus on songwriting. Some of that stems from time spent over the past couple years attending monthly workshops with the Chili Pepper Songwriting Club in Otsego.

“After we started going, we really kind of got into the idea of co-writing and just sort of really driving ourselves to have new music every month and it just kind of threw a switch and songs started coming,” guitarist Danny Oulette said. “Some of them are written individually and some of them are co-written and the next thing we knew we had 14 songs and it was time to get in the studio. It sort of takes us in a different direction. It’s still blues, but it’s definitely what would be called contemporary blues.”

THE SAME BAND WITH A DIFFERENT VIBE

The album, which was produced by Pete Galanis and recorded primarily at JoyRide Studio in Chicago, features guest appearances from both Galanis and Michigan blues legend Larry McCray. Galanis also recently produced Toronzo Cannon’s latest album “The Chicago Way,” which has been blowing up, as well as Omar Coleman.

Songs such as “Waiting Game,” a true working man’s anthem about pushing through, yearning for the weekend and the open road, still feature that traditional sound, highlighted by pinpoint guitar work courtesy of Oulette and fellow original guitarist/vocalist Joel Krauss, but the majority of the tunes have that more contemporary feel. 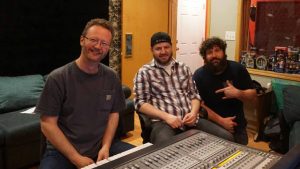 In the Studio: The Out of Favor Boys in Chicago.

Saxophonist Tony Sproul, who started the Out of Favor Boys with Oulette and Krauss back in 2003, does remarkable work on “Same Old Story” and “Already Gone,” a pair of tunes that deal with the common blues theme of the game of love.

That theme is exemplified by lyrics sung by Krauss in “Already Gone,” such as “I loved you when I met you, I loved you when you left. I thought we’d go the distance, but I guess you know the rest. Now I can’t quit thinking I’ve done something wrong. It’s too late baby, you’re already gone.”

The rhythm section of bassist Tim Brouhard, who joined shortly after the original trio came together, and recent addition Tommy Ufkes on drums, provide the rhythmic backbone of the band that keep the songs moving.

“It kind of feels like the first album in a new chapter,” Oulette said. “We’ve definitely turned a corner. We are the same band, but we are a different band at the same time.”

Tickets for this Friday’s CD-release party at Old Dog Tavern will be available at the door for $5. The band will go on without an opener at 9 p.m. and is expected to play three or four sets, playing until about 12:30 or 1 a.m.

VIDEO: Out of Favor Boys, “Nobody’s Listening” Live at the State Theatre