Songwriter Jessica Fogle recently wrapped up a 365-day challenge of writing a song a day, and now she’s ready to launch into another year-long musical project. (Videos, audio) 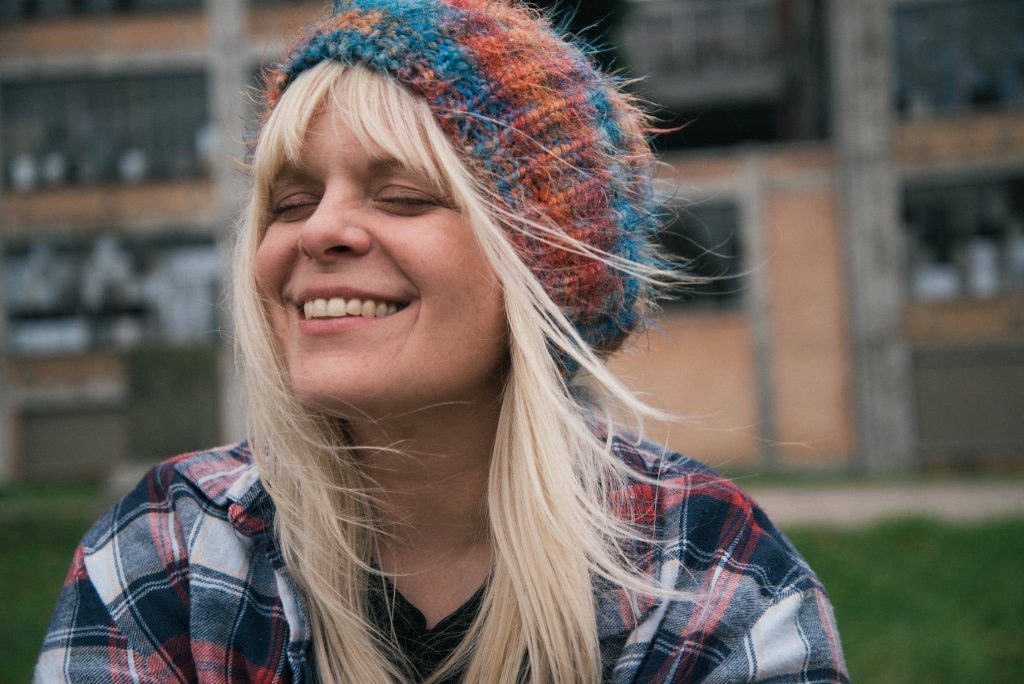 Feeling the Joy of Writing Music: Jessica Fogle, aka Jessica in the Rainbow, has embraced that passion. (Photo/Rachel Resterhouse)

SCROLL DOWN FOR MUSIC SAMPLES, VIDEOS AND LINKS TO FOGLE’S PROJECTS

Having released several group and solo albums – two under her own name, three as Jessica in the Rainbow and a self-titled recording as a member of the trio cloudlight – she’s confident that creativity is her strong suit.

She recently took that creativity to a far more challenging level: writing and releasing a new song every day for a full year. And now, Fogle – flaunting a unique sound she calls “dream folk-pop” – is preparing to tackle another major challenge by releasing a new album or EP every month for the next 12 months. 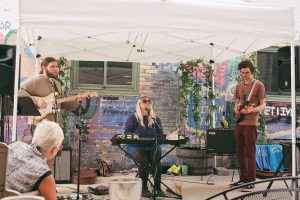 An experienced, conservatory-trained pianist, Fogle left her native home in Wisconsin to further pursue her musical career, living in Chicago and New York along the way, before calling Grand Haven home.

Since moving to West Michigan, the multi-instrumentalist who also plays ukulele, guitar, banjo and flute has cultivated a devoted fan base for her whimsical, calming blend of ambient synthesizer effects and indie-folk songwriting.

“Michigan has helped me, in that when I was in big cities like Chicago and New York, I think I got overwhelmed,” she said. “Those cities are so big; it’s hard to figure out where to start, and what to go after. Here, I think it has been useful to me to reconnect with my initial purpose, and the creativity behind my music. And it’s nice… I feel like I can navigate this much better.”

Fogle also works with local music students of all ages, and serves as a mentor to several area songwriters. She said helping inspire many of those budding songwriters battle their own writers’ block struggles was one of the main reasons she took on the “365-Day Songwriting Project.”

As its name implies, that project, which Fogle had heard about from other songwriters, challenges artists to write a new song each day for a full year – something she felt uniquely qualified to tackle.

“I was getting to know more and more people in this lovely music community,” she said. “And the issue (writer’s block) became so common, I was seeing it everywhere. I knew that obviously, I am not blocked. Something in all I had read about writers’ block must have worked. I want to help these people in my community with this issue: What can I pass on to them, to help them in their own projects?”

This drive to help others, her self-described “extra energy” and her frustration with recent world events inspired her to take on the challenge.

Fogle recently completed that year-long project, growing as an individual and learning more about herself as a singer-songwriter along the way.

“I feel like that challenge was, essentially, public journaling for a year,” she said, acknowledging a great deal of early support from friends, family and other musicians cheering her on the journey. But she also noticed that this wave of support eventually began to recede. 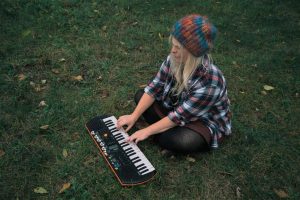 Diving Into Yet Another Year-Long Challenge: Jesssica Fogle (Photo/Rachel Resterhouse)

“Maybe that sounds crazy – to feel other people’s energy,” she said. “But I understand that when we see somebody in their element, doing their work, we get excited for them – that they have found their calling. But then, if we see it too much, I think it is human nature to, in a way, turn on them in our own minds. I don’t think it’s negative: We get overwhelmed by each other.”

Although the community’s change in reaction to the project almost made her quit, she persevered.

“If people get annoyed from me sharing so much, that doesn’t mean that I am a bad person,” she offered. “It means they need to look away. We live in a society that is staring at each other all the time; but if you’re staring at somebody who is generating negative feelings in you – be it because you are envious, or because you really don’t like what they are doing – stop looking at them. Do your own thing! Go do the thing that you feel called to do. It doesn’t mean that I need to stop.”

INSPIRING PEOPLE TO ‘JUST LET GO AND TO CREATE’

So, starting this month, Fogle has chosen to take on yet another musical challenge – this time vowing to release a new album or EP every month for the next year. She hopes this will challenge her to commit to finishing projects – some new, some slated from past sessions – which may otherwise stay unfinished for too long, eventually losing the passion with which the songs were initially written.

“What was the joy you felt when you first were writing that?” she said of the inspiration she wants to capture in her music. 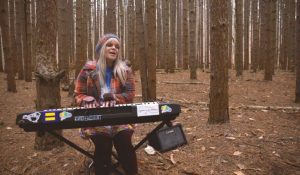 On Location: Fogle performing in her official video for “History Lesson”

But this new project isn’t simply trying to finish her songs and projects. Fogle hopes to discover the lessons hidden within this new challenge, just as she did with the 365-Day Songwriting Challenge.

No matter what happens along the way, Fogle says she’s now unafraid to share her songs with the world, nor fears what others will think or say.

“I knew I had that block, but I didn’t know it was fixable,” she said. “And now, I do. I don’t feel afraid anymore. That alone was worth taking on the 365-Day Challenge, right there.”

Fogle performs as Jessica in the Rainbow on April 26 at Harmony Hall in Grand Rapids. Get details online here.

She also plays with cloudlight in a May 19 house concert at “In the Clouds” in Grand Haven along with Pink Sky, Libby DeCamp, Queen Bee Dream, Maddie Jackson and Van Lente. Get more information about that show on Facebook here.

For more information on Fogle’s progress in her various songwriting challenges, or to learn more about her music from her various projects, visit these websites:

“Jessica in the Rainbow” Webpage: https://jessicaintherainbow.com/

“365 Days Vol. 7, or ‘Misfits, in love with the world” BandCamp Page: https://jessicaintherainbow.bandcamp.com/album/365-days-vol-7-or-misfits-in-love-with-the-world