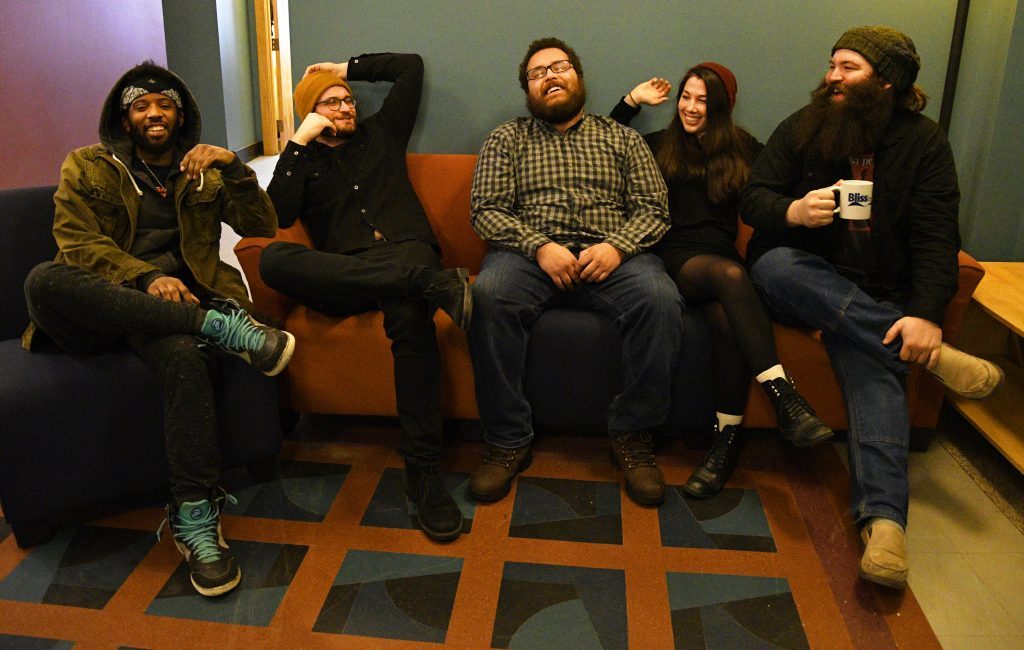 THE BAND: Earth Radio
THE MUSIC: Progressive soul that pushes ‘boundaries of space and time’
WHERE YOU CAN SEE THE BAND: 9:30 p.m. Thursday (March 1) at Founders Brewing Co. in Grand Rapids, with Lushh opening the show

One might say that Earth Radio has taken an inter-planetary, multi-galactic and completely organic approach to the songs that each band member has a hand in creating.

“There’s really no way to define this music,” suggests singer and keyboard player Hannah Laine. “It’s very experimental and there’s combinations of jazz, neo-soul, hip hop and even some metal, rock, so a lot of different genres meshed into one.” 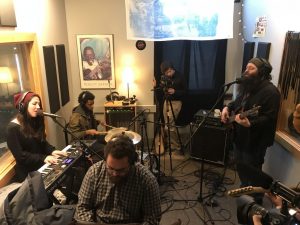 On the Air: Earth Radio in-studio at WYCE. (Photo/Local Spins)

Oh, and then there’s the added, wood-enhanced sonic element of recording their debut album in a log cabin.

It wasn’t long before drummer Mario Copeland and keyboard player Dutcher Snedeker were on board, with guitarist Travis Swanson joining the band after moving to Grand Rapids from Marquette.

“I think we knew going into it — we already knew it was special and we said, ‘All right, we’ve just gotta make it happen now,’ ” Avdek says. “We wrote like 10 songs worth of material in a week-and-a-half.”

They performed two of those songs in-studio for this week’s edition of Local Spins on WYCE. Watch a video of “Over Again” here, with the full radio show podcast below.

Influenced by everything from Hiatus Kaiyote, Chris Dave & The Drumhedz, Erykah Badu and D’Angelo to heavy metal music, the band assembled at Avdek’s parents’ house in Muskegon to record its first album with engineer Addison Eilers.

The log cabin oozed “all this natural wood sound,” Avdek says. “It’s just got some rally great tones and (this is) the most excited I’ve ever been for a record. It sounds great, every song’s a little different.

“Everybody on the record wrote something. That’s a really exciting thing because that doesn’t happen often where everybody in a group is a composer, a writer. There’s nothing cooler than that.” 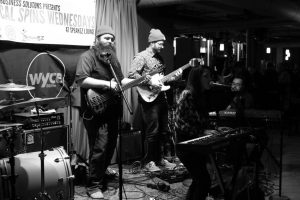 Adds Laine: “It happened organically. It kind of fell into place and I think that’s the most rewarding and beautiful thing.”

“We don’t even know” what folks should expect from the album-release performance, Avdek jokes, noting the band plays its songs differently every time it hits the stage. And band members, who are all involved in other projects, are taking the same sort of approach with the future of Earth Radio.

“The biggest goal is just to become better human beings and become better musicians, and being around this group of musicians is already doing that for me,” Avdek says. “This is one of the most exciting projects I’ve ever been a part of.”

The Feb. 23 edition of Local Spins on WYCE also boasted the on-air premiere of several new tracks by Michigan artists, including Lushh (which hosts an album-release for its “Insight Unsought” project on Sunday in Kalamazoo), Nathan Kalish, The Plastic Bears, Urban Cowboy, Andy Baker, Bet on Rats, Last Gasp Collective and El Brandino (who has a CD-release show at Founders Saturday night), as well as John Proulx (who hosts an album-release at St. Cecilia Music Center on Sunday afternoon). Listen to the podcast here.