The genre-bending Kalamazoo band recently depicted sleep and dreams artistically — from the serene to the frenetic — in a unique “live painting” concert that will be available on video. 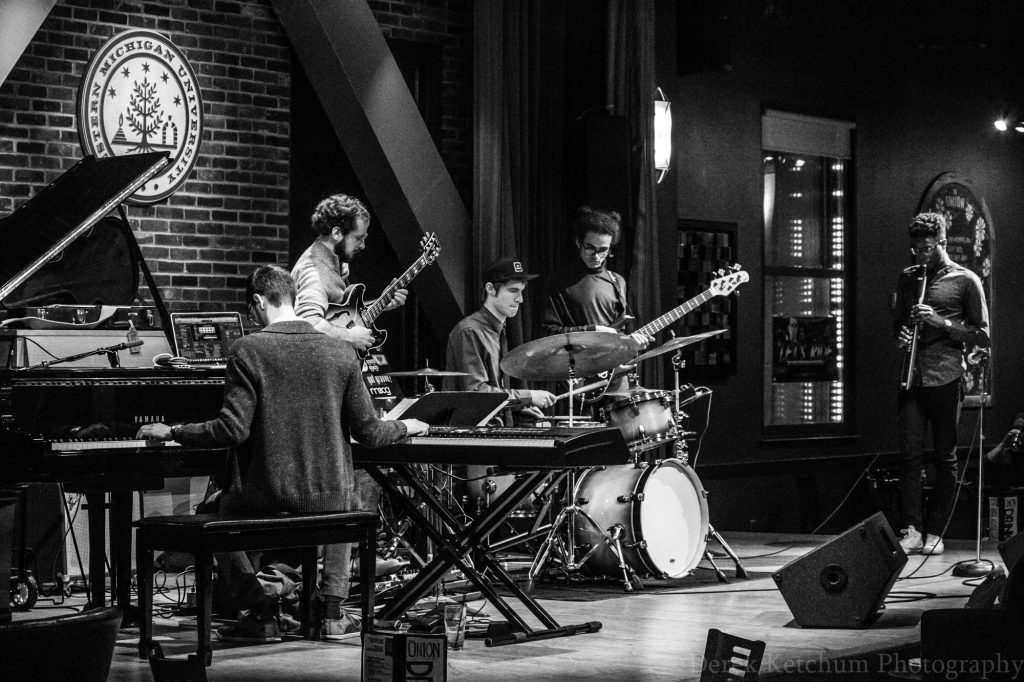 Sleep and Music: Lussh performing this fall at The Union Cabaret in Kalamazoo. (Photo/Derek Ketchum)

EDITOR’S NOTE: Jazz keyboardist Dutcher Snedeker is familiar to West Michigan audiences through his work with Brad Fritcher’s MOODS, Blushing Monk, The Underground Circus, Hannah Rose Graves and many others. But for this Local Spins essay, he dons his hat as a writer, giving readers a glimpse into a boundary-pushing project by a Kalamazoo band.

Sleep is something so essential to living, yet many of us ignore it in our busy lives.

We need more if it, we try to make time for it, but we’re often distracted and can’t shut down at the end of a long day. Musicians especially forego sleep to play gigs, ride out inspiration in a recording studio, or to cram a mountain of academic work in between honing their craft on an instrument. 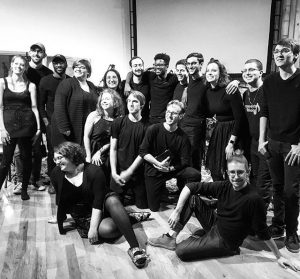 The Whole “Insight Unsound” Crew: The multi-disciplinary event involved a lot of players.

Lushh, a genre-bending group from Kalamazoo, sought to explore human sleep patterns and the state of dreaming in a recent multimedia, multi-disciplinary artistic concert.

The two concerts were recorded live in front of a studio audience at Overneath Creative Collective in mid-November.

I attended the first of the two performances, with a seat close to the ensemble. Seeing the instruments, projection equipment, and tall canvas stations in the candlelit space gave me the feeling initially of being on the Food Network show Chopped: how were these ingredients going to work together to create one cohesive dish? As soon as the first movement took off, everything came together in a singular vision with music and changing visual elements wrapped around some careful composed and curated poems to highlight different depictions of dreaming and sleep. 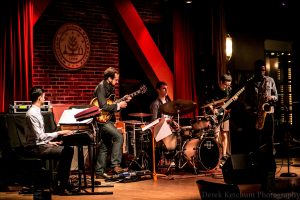 While Hannah Truckenbrod breathed life into the poetry, a delightful palette of harmonies, rhythms and textures engaged listeners throughout the 50-minute, multi-movement work.

There were moments of frenetic energy, showcasing the chops each member had while mimicking an almost nightmare scenario. Meditative moments gave room for introspection, including a power solo performed by Saliba separate from the ensemble that explored a variety of sounds from his guitar and pedal rig. When Eddie Codrington wasn’t gliding effortlessly over harmonic changes on his tenor sax, he switched over to his EWI to provide another unique sounds in the ensemble.

Grayson Nye’s harmonic and instrument choices complemented Saliba’s guitar playing and the layers of winds, adding a deeper layer of color to the ensemble’s sound. Madison George and Matthew Epperson held down the rhythmic foundation, easily shifting meters and time while grooving tightly with their fellow band mates. The improvised, live painting along with the ever-changing projections were as amorphous and unpredictable as dreaming itself, both translating sounds into striking visuals.

Overall, I would say that months of preparation yielded a wonderful concert experience and a full realization of a complex creative vision. While Saliba took the lead in his creative vision, his fellow band members, additional musicians, and supporting audio/video personnel came together to celebrate this project’s accomplishments. It speaks volumes to the talents of these young artists and the depth of talent found in Kalamazoo.

For those unable to attend, follow Lushh on social media to get information on where to order the video and audio release of “Insight Unsought,” with a suggested donation of just $10 to secure a digital copy of both formats. The band is eyeing February for the release.