As the ever-woeful Detroit Lions get ready for their traditional Thanksgiving Day game, Local Spins recaps the sad history of the franchise with a rock playlist of reflective misery. 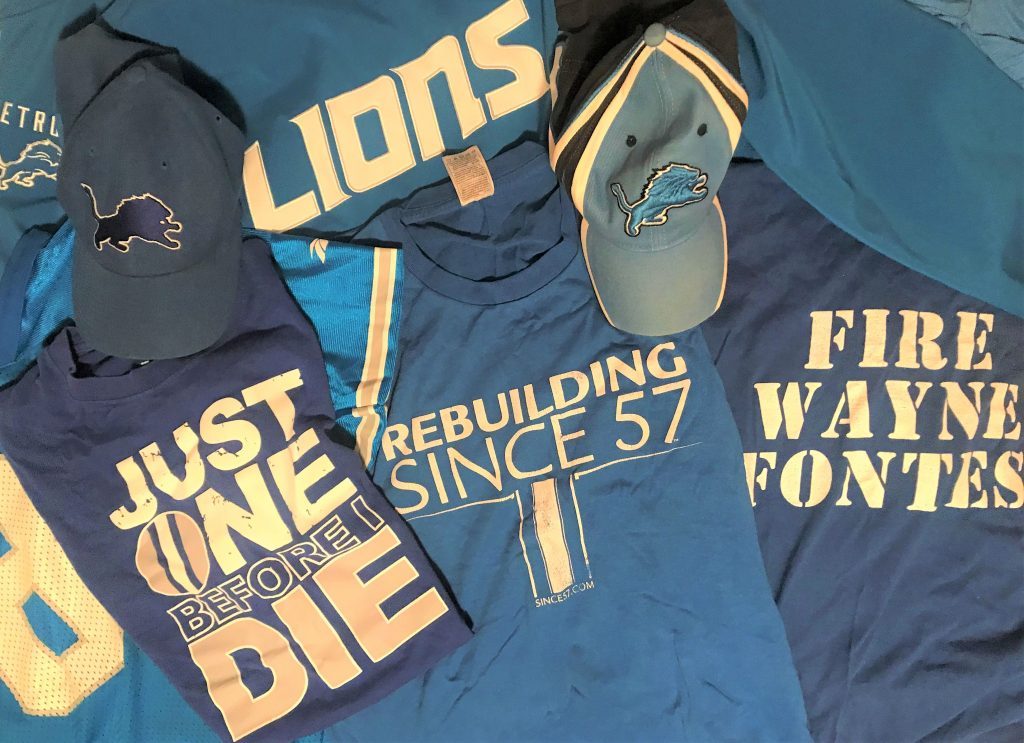 Long, Cruel Road: When it comes to 62 years of futility, the Detroit Lions are turkeys in the rain.

SCROLL DOWN FOR PLAYLIST, VIDEOS

As the true turkeys of the NFL, the Detroit Lions do nothing to dispel the myth that turkeys are so clueless they’ll drown with their mouths open in a rainstorm.

For more than 60 years, the Lions have stumbled cluelessly with their mouths agape amid storms, sprinkles, sunny weather, you name it, while other critters (Bears, Ravens, Eagles, Falcons, Panthers) have strutted to Super Bowls and generally spent more time celebrating in the endzone than squabbling with referees about head-scratching calls. 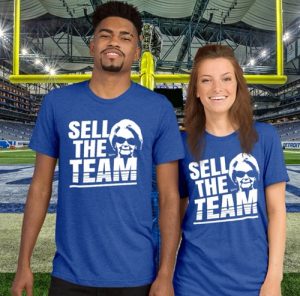 Sign of the Times: A Detroit shop called The DLine is now marketing “Sell the Team” merchandise.

Indeed, since I’ve been alive (during which time I’ve never seen the team even sniff a championship of any kind), the Lions have endured more misfortune, bad luck and dumbfounding, unimaginable, flabbergasting and downright stupefying losses/penalties/plays/calamities/coaching decisions/injuries/replay challenges/excuses than any team in any sport, period.

I don’t know if it’s a Motor City jinx or the Bobby Layne-being-traded curse or the Ford Pinto-inspired ownership, but there’s a certain woeful, here-we-go-again malaise that sets in every season for fans of a team that’s one of just four franchises (Brown, Jaguars, Texans and Lions) that’s never been to a Super Bowl – unless they bought tickets to the game.

That old joke bears repeating this season, thanks to a team that’s been ahead in every game and within a score of winning nearly every game but still finds itself in last place in the NFC North with an inexplicable 3-7-1 record, its star quarterback on the sidelines with a broken back, and even its backup QB listed as “questionable” this week.

A PLAYLIST WITH HEALING POWER?

As we brace ourselves for another heaping helping of indigestion during the Lions’ traditional Thankgiving Day contest (in which the team boasts a less-than-mediocre 36-38-2 record overall), I’ve assembled a pathetic playlist of songs epitomizing the sad history of the franchise. Appropriately, some even come from Michigan-bred artists who are fans of the Lions (I think). 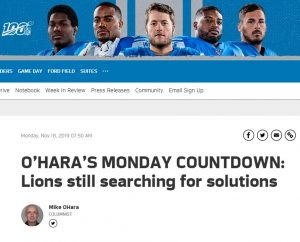 From the Lions’ Own Website: The search has gone on for decades.

For years, I penned a “please-God-let-something-good-happen” column about the Detroit Lions as each new season unfolded, but frankly, the exercise became too painful. Still, music is supposed to have healing power, so maybe wallowing in captivating songs about a pitiful team has medicinal value especially when coupled with an ample supply of Michigan beer.

Then again, maybe not, but sharing my misery with the rest of you makes me feel better somehow … because I’m utterly helpless when it comes to shaking my cruel addiction to this hapless bunch in silver and Honolulu blue.

In spite of it all, I’ll be rooting for these turkeys today as they battle the Chicago Bears, who are almost as wretched as the Lions.

And win or lose, there’s at least some comfort and satisfaction to be had in sharing a common bond and rallying cry on Thanksgiving with a team whose mantra is often heard in the Windy City: “The Packers suck.”

1. “Jive Turkey,” The Ohio Players (1974) – In keeping with the turkey theme, let’s start with this funky number that includes the line, “I put my trust in you.” Something many Lions fans have done for way too long.

2. “Born to Lose,” Social Distortion (1992) – There are scads of songs about losers in the rock era that would have made easy picks: “Loser” (Beck), “I’m a Loser” (The Beatles), “Long Line of Losers” (Montgomery Gentry), but this Social Distortion tune says it all for those born into Lions misery. We can only hope that one day, we can add Tom Petty’s classic to the list: “Even the losers get lucky sometimes.”

3. “Poor, Poor Pitiful Me,” Linda Ronstadt (1977) – This Warren Zevon song has been covered by others, but never as passionately as by Linda Ronstadt. And many a Lions fan has mumbled these words on their way out of Ford Field: “Lord have mercy on me. Woe is me.”

4. “Chain of Fools,” Aretha Franklin (1967) – Our first entry by a Detroit artist, one of many raised on the exploits and foibles of the Lions. It’s been quite the chain of coaches, bad draft choices, etc. Oh, she also sang “It Hurts Like Hell” and “Drown in My Own Tears.” Unfortunately, on the flip side, the Lions have never really gotten R-E-S-P-E-C-T.

5. “Still the Same,” Bob Seger (1978) – Michigan’s favorite rock ‘n’ roll son – and Lions fan – had to make this list, especially because things have, well, been the same with this franchise since about 1957. (By the way, Seger & The Silver Bullet Band also recorded “Blind Love.”)

7. “Welcome to My Nightmare,” Alice Cooper (1975) – Another Detroit native, saying what we often feel. Alice Cooper also gave us “Long Way to Go,” and ain’t that the truth.

9. “Kicked in the Teeth,” AC/DC (1977) – Somewhere on this football-driven list, there had to be a reference to kicking. And all Lions fans have felt like they’ve been kicked in the teeth, and the gut and, well, you know.

10. “That’ll Be the Day,” The Crickets (1957) – Bizarrely and appropriately, this tune by Buddy Holly and company was released in 1957, the last time the Lions won an NFL championship (and the same year that Fats Domino had Lions-appropriate hits with “Blue Monday” and “Valley of Tears”). Will that day of glory ever be repeated?

Honorable Mentions: “Turkeys in the Rain,” Seth Bernard; “Who’s Afraid of Detroit?,” Claude Von Stroke; “I Can’t Stand Up for Falling Down,” Elvis Costello; “The Sound of Failure,” Flaming Lips; “My Own Worst Enemy,” Lit