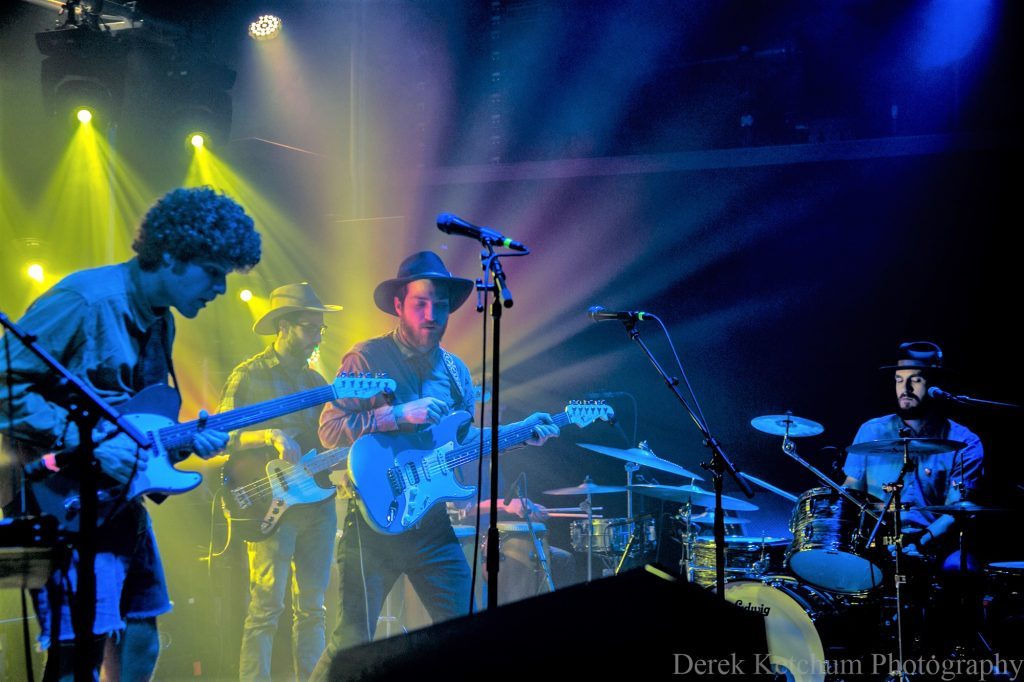 THE BAND: Desmond Jones
THE MUSIC: Funk/rock/jazz fusion
WHERE YOU CAN SEE THE BAND: 4 p.m. Sunday at the Feedback benefit at Founders Brewing in Grand Rapids (with Hollywood Makeout and The Honeytones); May 25 at Otus Supply in Ferndale, June 16 at Founders Fest in Grand Rapids with Joe Russo’s Almost Dead and many more; Aug. 10 at Cowpie Music Festival

SCROLL DOWN FOR THE LATEST VIDEO FROM DESMOND JONES, AND TUNE INTO LOCAL SPINS ON WYCE (88.1 FM) AT 11 A.M. FRIDAY WHEN DESMOND JONES WILL BE IN-STUDIO GUESTS

For West Michigan’s Desmond Jones, that’s quickly translating to bigger and better things, and maybe soon enough of a payday to afford “a trolley to the jeweler’s store,” as The Beatles’ song that spawned the band’s moniker goes.

The five-piece jammy, jazzy, funk-fusion band out of Grand Rapids, which will headline Sunday’s annual Feedback benefit at Founders Brewing Company (April 29), is no doubt beginning to see the fruits of its labor.

Fresh off of its biggest weekend to date — opening for Papadosio at St. Andrew’s Hall in Detroit and christening the stage at The Intersection’s brand new room, Elevation, in front of a capacity crowd — it was just announced earlier this week that the band will take the stage at this year’s much-ballyhooed Founders Fest, playing alongside the likes of Joe Russo’s Almost Dead, Anitbalas and others. Desmond Jones is one of only two local bands playing the June 16 festival, joining Founders’ own FBC All-Stars.

“Even though it’s in our hometown it’s one of the bigger exposure slots that we have gotten so we are really excited about that,” said drummer John Nowak. “Being in Grand Rapids, we know we’ll have our fans out there but it’ll also give us the opportunity to play our music for some new fans. We always try to take advantage of those opportunities so we are going to bring the heat for our set. I am already counting down the days.”

While the band — inspired heavily by The Beatles, Frank Zappa and many modern jam bands — is finding its way in front of bigger crowds these days, it’s still finding that the long and winding road has a few speed bumps: One week before its sold-out gigs with Papadosio, Desmond Jones played in front of zero — yes, zero — people at Milwaukee’s Cactus Club.

“The set (listen here) ended up actually being one of our most favorite and creative sets that we ever played because we come with an attitude of ‘We are here’ and we are going to be playing our music no matter what, so let’s make the absolute best of it,” Nowak recalled. “We played our full set to our tour manager, Nate (Purchase) the sound guy and a couple guys from the opening band.”

He added: “When you are on the road, there are stepping stones that are part of the experience to get you to where you want to be and are supposed to be. To know we can come home and play some awesome shows all over the state of Michigan it really, really keeps us positive, and it keeps us going.” 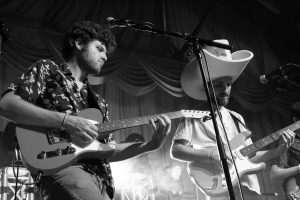 On Stage: Desmond Jones takes a different tack in the studio versus its live shows. (Photo/Anna Sink)

The band knows the growing pains of “playing empty rooms” while building its audience the past six years. “In those times, I’d just imagine people there and know some day they’d be there,” Nowak said. “We know that we have a long road ahead of us, but when we look back to where we were a year ago, two years ago, three years ago, we are really proud of how far we’ve come.”

The band, which extends its jams during performances, has carved out a bit of a different niche in the studio, recording with more intent. As a follow-up to a pair of early EPs, Desmond Jones — which also features Chris Bota (guitar and vocals), John Loria (bass and vocals), Isaac Berkowitz (guitar, drums and vocals) and George Falk (saxophone and vocals) — released its first full-length album (listen here) in October, recording with Glenn Brown in Lansing.

Just two weeks after that release, they were already back in Brown’s studio, beginning work on their next LP. 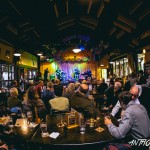 “We are lucky enough to have five songwriters in the band so we have a nice catalog that we are excited to record,” Nowak said.