Rock With Some Blues and Country Thrown In: Deerfield Run plays its album-release show next Wednesday at SpeakEZ Lounge.

THE BAND: Deerfield Run
THE MUSIC: Rootsy, bluesy rock
WHERE YOU CAN SEE THE BAND: 8 p.m. Wednesday at SpeakEZ Lounge in Grand Rapids (CD-release show); Sept. 30 at Willowsong Music Festival in Sidney, Mich.

The musicians in Deerfield Run understandably get giddy when someone suggests that the Grand Rapids group has a vibe not unlike that of The Band.

“It’s rock ‘n’ roll with a bit of blues and country thrown in, depending on the song,” suggested guitarist, singer and frontman Alex Austin. “We love a lot of different music. I think it shows through our playing and our sound that we’re very eclectic individuals ourselves.” 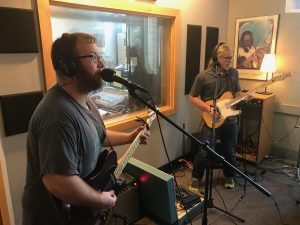 Recorded at the Grand Rapids studio of Crane Wives bassist Ben Zito, the self-titled album represents the culmination of a musical friendship between Austin and Dore that dates back 15 years when Austin taught Dore how to play guitar at a Boy Scout camp. Dore credits Austin for putting him on the path as a musician.

“We’ve been playing together a long, long time and I’m super excited about this project,” Dore said, “and happy that’s its finally come to fruition.”

The band showed off a pair of its new songs during a recent episode of Local Spins on WYCE, performing “The Getaway” and “Set Me Free” in the studios of WYCE (88.1 FM). Watch the video of their performance of “Set Me Free” here, with the full radio podcast below.

For Austin, who serves as the band’s chief songwriter, the debut album – recorded in a single weekend at Zito’s studio – represents the first stop for a group which hopes to get right back into the studio in 2018 for a follow-up.

“We’re extremely proud of how this album sounds and Ben Zito is no small part of that,” said Austin, who’s eager to showcase the new material for fans.

“I hope they’ll just hear something in the songs that will reach them in one way or another – whether a truth resonates with them or just (that) they’re catchy as all heck. As long as they like the songs, I’m good with that.”

The band, which also incorporates covers of artists such as Ryan Adams, Eric Clapton and the Allman Brothers into its sets, is “super proud” of its songs and its melting-pot sound, added Dore.

“In my other band, we’re kind of the same personality, the same stage in life. In this band, we’re all very different,” Dore said. “We all like very different styles of music. I think we have a unique combination of sounds and I really like what’s happening with it.”

The 157th episode Local Spins on WYCE also featured new music from May Erlewine, Cosmonaut, Barbarossa Brothers (the musicians’ pick of Deerfield Run), Mid-Life Crisis, The B-Side Growlers and Cosmic Knot, along with tracks by Jonathan Timm and Olivia Mainville & The Aquatic Troupe. Listen to the full podcast here.