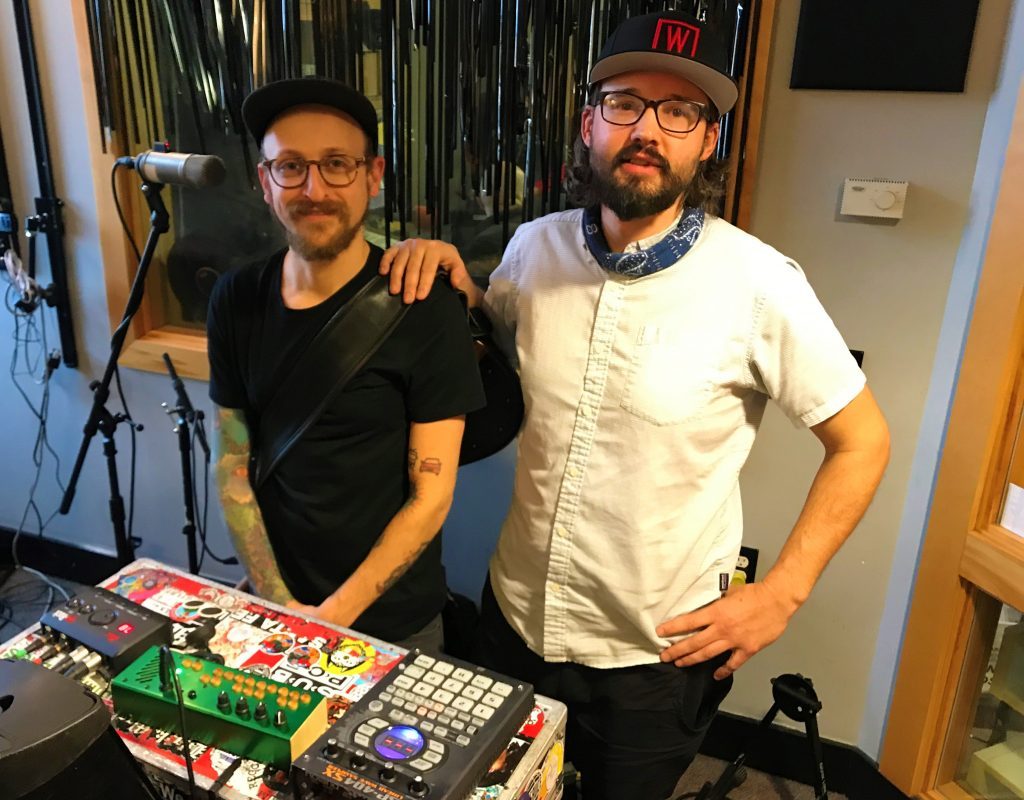 Not ‘100 Percent a Jazz Group’: Eli Kahn and Arthur Schroeder of After Ours. (Photo/Local Spins)

SCROLL DOWN FOR VIDEOS, PODCAST

It’s a South Bend, Ind., duo that spent years as part of an avant-garde jazz trio and honed its “instrumental hip hop” chops with rapper Billy “B. East” Easton.

Beyond original, boundary-pushing material produced on drums, synthesizer, looping gear and a seven-string guitar, After Ours rolls out inventive covers of diverse classics by Britney Spears, Radiohead, The Deftones, A Tribe Called Quest and more.

Oh, and they can still deliver an evening of jazz standards and Christmas tunes. 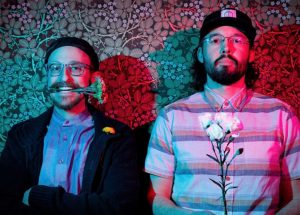 Appealing to Younger Fans and an Older Jazz Audience: After Ours (Courtesy Photo)

As guitarist, synthesizer player and looper Eli Kahn puts it, the duo of Kahn and drummer Arthur Schroeder loves being able to “dabble in both worlds.”

“A lot of our younger fan base is definitely geared toward electronic jam band music and instrumental hip hop,” Kahn said.

“But then we have a lot of older folks that love our takes on traditional standards like ’Take Five’ and they’ll be really excited that they’re hearing music from their era being arranged by modern musicians.”

After Ours also has become an alt-jazz favorite amid Southwest Michigan’s music scene and will play a big holiday week show with Kalamazoo’s The Go Rounds on Dec. 28 at The Pyramid Scheme in Grand Rapids.

The duo this week brought its cutting-edge, genre-bending approach to Local Spins on WYCE, playing the tracks “Cutlass Supreme” (from its 2018 album, “All the Time”) and a new song about Kahn’s cat, “Pixy Stix,” on the air. Check out the in-studio video for “Pixy Stix” here and scroll down for a video for “Cutlass Supreme” (filmed at Third Coast Recording in August) and the full radio show podcast.

VIDEO: After Ours, “Pixy Stix” (Local Spins on WYCE)

“I don’t think we’re 100 percent a jazz group,” Kahn offered. “We definitely have jazz influence, but I hesitate to say I’m a jazz guitarist.”

Kahn, however, did go to school for classical guitar performance and his affinity for renowned jazz fusion guitarist Charlie Hunter eventually prompted him to purchase a seven-string guitar (featuring two bass strings and five guitar strings) – an instrument that took years to master. 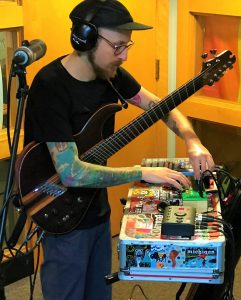 For performances, he uses a small synthesizer and his guitar, running them through “a myriad of effects” and linking them up at a looper.

“I’m doing a lot of bass looping, rhythm guitar looping and then soloing on top of it and doing more melodic work as I loop things live,” he said. “Nothing is pre-recorded. It’s all looped.”

It’s also an M.O. that works well in a duo format.

“It’s much easier to tour as a duo. We’ve always been relatively small (within various bands). It’s convenient to have just two people,” said Schroeder, noting the pair creates its own original material and adds covers of other artists to its repertoire while also “making stuff up on the fly.”

Its most recent EP, “Random Nuggets: Vol. 1,” features After Ours’ takes on a mix of well-known gems.

“We’ve had so many people tell us that they love those arrangements of those as instrumental tunes.” Kahn said, “that we felt compelled to record them.”

Get more information about After Ours on the duo’s website. Tickets to the Dec. 28 show with The Go Rounds at The Pyramid Scheme are $12 advance and available online here.

The Dec. 13 edition of Local Spins on WYCE – which showcases local and regional music for an hour every Friday at 11 a.m. on WYCE 88.1 FM – also featured the debut of new tracks by The Fast Hands Band, Brother Elsey, Lynn & The Moonshine Runners, eRoy, Porter Kenyon and the latest track from the “Christmas at Critter’s” project (this one featuring Joe Bockheim of The Legal Immigrants on a track produced by Chris Newberg), as well as music by I Believe in Julio, The Go Rounds and The Gasoline Gypsies (who play Local Spins’ Michigan Mondays concert at Listening Room on Monday).