The emerging Plymouth-based band is one of only two Michigan acts on this year’s impressive Ann Arbor Folk Festival bill. Discover more about the quartet in this Local Spins Artist Spotlight. 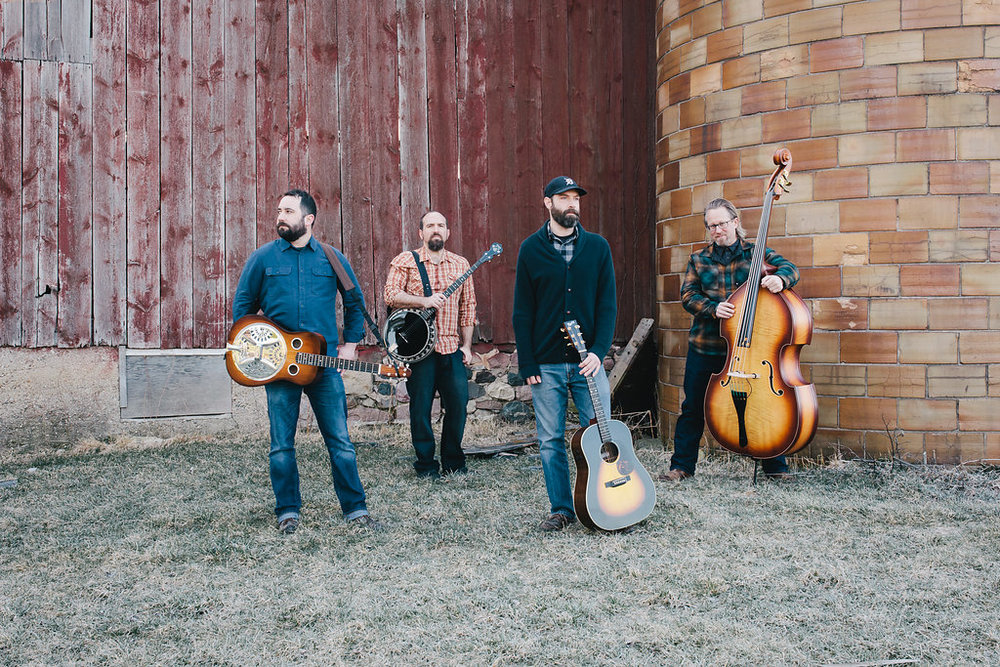 EDITOR’S NOTE: This is part of an occasional series helping bridge the music scenes on the east and west sides of Michigan. It showcases artists from Detroit, Ann Arbor and Southeast Michigan, with interviews conducted by music writer Jeff Milo. Today, he spotlights Plymouth-based Americana act Cold Tone Harvest, one of only two Michigan acts playing the 2020 Ann Arbor Folk Festival.

Any conversation involving Cold Tone Harvest would require acknowledging the ways in which categorical dividers between musical genres have become pretty permeable.

The Plymouth-based four-piece is one of the only Michigan-based music acts featured on this year’s Ann Arbor Folk Festival lineup, which includes soul singer Bettye Lavette, as well as top-tier names from the national folk scene such as Nathaniel Rateliff, Calexico and Iron & Wine, Ingrid Michaelson and Mandolin Orange.

So we should start with that genre that’s eponymously emphasized by the now 43-year-running, two-day gathering of top-tier troubadours in Ann Arbor that’s a fundraiser for The Ark. 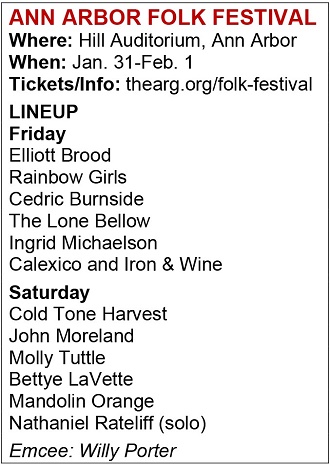 “It’s always been a goal of ours to one day play the Folk Fest,” guitarist Tony Pace said of the band’s upcoming Feb. 1 appearance on the Hill Auditorium stage.

Added drummer (and banjo player) Brian Williams: “We look at it as one of the shining gigs upon the hill.”

So, where exactly does Cold Tone Harvest fit into folk as a genre?

Andrew Sigworth was, and is, a folk singer, at heart. Williams has said that the band was formed around the essence of the singer-songwriter’s acoustic guitar and signature mid-baritone vocals.

As a duo, they started working on what would become Cold Tone Harvest more than a decade ago, playing coffee shops around Southeast Michigan, before eventually adding upright bassist Ozzie Andrews to fill out the rhythms.

As the trio became a quartet, with Pace adding guitar, dobro, and pedal-steel, the sort of catch-all genre they evolved into was Americana, a close cousin to folk.

“I think it’s fascinating,” Andrews said of the notion that folk is no longer a rigidly defined form. “I’ve always thought of music as being a global village. Americana music gave me a chance to identify with a genre that has so many various influences within it.

“Having come from a background of world music, I was skeptical at first of the idea of Americana, but I’ve acclimated to the concept of how it can also be a style of world music. And that’s the same for folk, as well as blues, and rockabilly and jazz, and bluegrass. (Americana) is such a great genre because it can be all over the map.”

EVOLVING AS A BAND WITH ‘DIFFERENT LAYERS AND AMAZING TEXTURES’

Sigworth spoke about the influence of seeing performances by songwriters like Josh White, Jr. and Jason Dennie, and how it led to him writing his own material.

“I felt that it was this important thing to me, this thing that has so much culture sounding it, music, lyrics and songwriting. I think that as the Folk Fest continues, it’s become more versatile now. Just like our project, as a whole, went from being a solo songwriter, to this band evolving around it, but always still holding true to the power of the song.

“Brian and I worked together for a long time, but then Ozzie and Tony came in adding all these different layers and amazing textures to the sound that we have.” 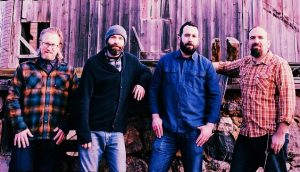 ‘Their Own Kinda Feel’: The band continues to develop new material. (Courtesy Photo)

Pace said that Sigworth’s guitar and lyrics continue to be “the catalyst for our sound, in general. But we play heavier-sounding guitars at some shows, and at certain gigs, we’ll play mostly upbeat stuff. But we always have that underlying sound that is just Andy’s tunes, and we all kind of just layer in on top of that.”

Consider a tree-like metaphor: If Sigworth’s music is the trunk, and each member is an expanding branch, then the sonic qualities they bring with their instruments are like the flourished, verdant leaves that spring forth.

Much of our conversation revolved around the ways in which not only the band has grown, but the ways in which these four individuals have influenced each other’s growth. Likewise, Folk Fest lineups have benefited by the genre having blossomed into a composite of stylistic petals, with gradations of rock, blues and even soul.

With its 2018 album, “After You,” the Plymouth quartet really conjured a resplendent rendering of ambient Americana and folk-rock, with a mixture of moods and textures that evoked the faint twilight glow of a late autumn day. The arrangements and harmonies spark that special kind of electricity in the soul of the listener found only on an extended, city-escaping road trip, balancing meditative calm and cathartic storms.

Listen: “Frozen Ground” (from “After You”)

“We’re trying to take the stuff that we find captivating within (“After You”) and keep it around (to enhance new material). But we are trying to tweak it a bit, update it somewhat. I’d hesitate to say we’re running too far away from folk and Americana, but we’re trying to do what we can to modernize it a bit, whatever that can mean.

AN ‘INTIMATE SORT OF DELIVERY’ LIVE

“Maybe it’s adding more interesting tonal colors with the guitars and continuing to work with harmonies. Perhaps these are songs you wouldn’t consider to be straight-ahead ‘folk,’ but they have their own kinda feel to them.”

Pace credited Ann Arbor-based singer-songwriter and record producer Chris DuPont for “a big part of getting the sound of that album. And I think one of the things we’ll try to do differently is just make sure to work with more folks, (like DuPont), to have other producers add their sound to a lot of the songs.”

As for live shows, Andrews said band members “want to stay grounded in that intimate sort of delivery that, I think, gives us that chance to have that connection, that ephemeral connection (with) an audience. That’s just golden and precious. We want to be in a position where people can hear, and have a chance to connect, with what we’re trying to do.” 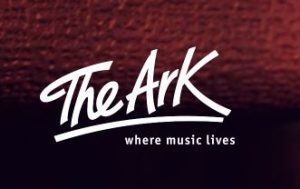 The Folk Festival is a benefit for The Ark

Added Williams: “I know I tend to do better in front of an engaged audience, ’cause that’s where the magic happens with Cold Tone. We love to play in listening rooms, but we still want opportunities to play at festivals. Our hope, in 2020, is for us to just continue with our momentum.”

For Sigworth, that momentum has come with songwriting augmented by his bandmates.

“On a certain level,” he said, “I’ve always had these other parts swimming around in my head. There were always other layers I would hear … even back when I was cutting my teeth playing solo acoustic. I was leaving space for things, space for the potential of it to be a project and have other musicians involved in it.

“So it progressed in a really natural way. I’ll never forget when (Pace) came in and rehearsed with us in the barn where we were playing, and he started on his lap steel and I was blown away. ‘Yes, here it is! The thing that was swimming around in my mind!’”

That hard-to-place, emotional epiphany, of hearing a song that feels like home — or has some phantasmagorical familiarity to it like an emotion swimming around in your mind — might also be found when listening to Cold Tone Harvest.