The duo playing City Built’s Friday Night Live was this week’s guest for Local Spins on WYCE, which also debuted music by Wuzee + Samil, The Yesterdays, The Indigo Curve, Phil Denny and more. 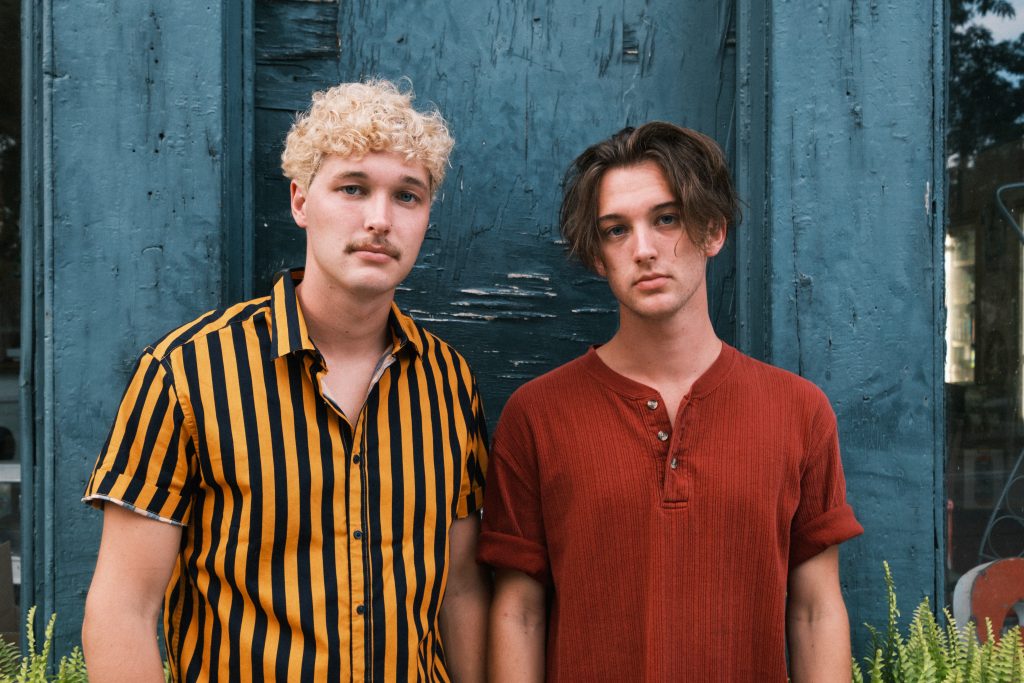 Making Music That Excites Them: Kendall and Connor Wright of Cal in Red. (Courtesy Photo)

Germinating as a dream-pop project in 2018, Cal in Red’s duo of brothers has since honed its infectious sound for this year’s latest crop of singles.

How ever it’s described, the Grand Rapids duo is hitting its stride as it gears up to play its first concert in eight months and prepares to release a studio EP this fall.

“We’re just looking to keep making songs that excite us – most importantly things that we’d want to listen to,” Wright said of the music he creates with his drum- and synth-playing brother, Connor.

“If we can connect with it, we hope others will.”

“It’s going to be quite a different show,” Wright said, comparing it to the duo’s December 2019 performance when the brothers had a limited amount of material to play. They’ve since released several singles.

“We’re going to feel a lot more confident going into this one. We’re kind of bringing a full package; the biggest sound that we can with two people as possible.”

Wright, 26, who works for City Built, said he’s seen “firsthand how the city shows up for those (Friday Night Live) concerts and it’s awesome.”

To preview the show, Wright showcased the duo’s two most recent singles for this week’s episode of Local Spins on WYCE: “Act Like” and “Zebra.” Watch the video for “Act Like” here and scroll down to listen to the full interview and radio show podcast.

Growing up south of Lansing and attending Eaton Rapids High School, the Wright brothers took different paths to Cal in Red. Connor was a percussionist involved in drum-corps competitions, and Kendall picked up a banjo at age 18 during a “Mumford and Sons phase.”

Together, they performed in the band Mertle, which landed opening slots for The Shins and a set at the Treefort Music Festival. Eventually, they started working on their own music as a duo, inspired by the likes of Beach House, Tame Impala and Porches. 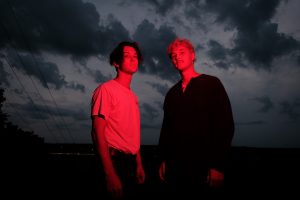 “Sonically, there are some recurring things in our music. Lots of falsetto vocals, ’80s-sounding synths, punchy drums, chorus and fuzz guitars, and loads of reverb, all blending together to make a slightly washed-out sound that’s almost a little psychedelic at times, or so we’re told.”

Recording much of their instrumentation in Connor’s bedroom, with drums recorded at their cousin Max McKinnon’s house, Cal in Red plans to “hit the ground running” after this weekend’s live show in hopes of releasing an EP in September.

It’s what the band hopes will be the beginning of many recording projects and a fruitful career.

“In two years,” Kendall Wright said, “we’d like to be recording, releasing and touring full-time.”

This week’s edition of Local Spins on WYCE – which showcases local and regional music at 11 a.m. Fridays on WYCE (88.1 FM) and online at wyce.org – also featured new music from The Yesterdays, Wuzee + Samil, John Richard Paul, The Indigo Curve, Jeremy Porter & The Tucos, Billy Strings, Phil Denny, Jake Allen and tracks by The Fast Hands Band and hi-ker (this week’s musicians’ pick by Cal in Red). Listen to the radio show podcast here.