The band’s irrepressible, bombastic legacy gets short shrift treatment in this much-ballyhooed biopic, says movie critic John Serba, who wishes the film would have done more than stoke nostalgia. 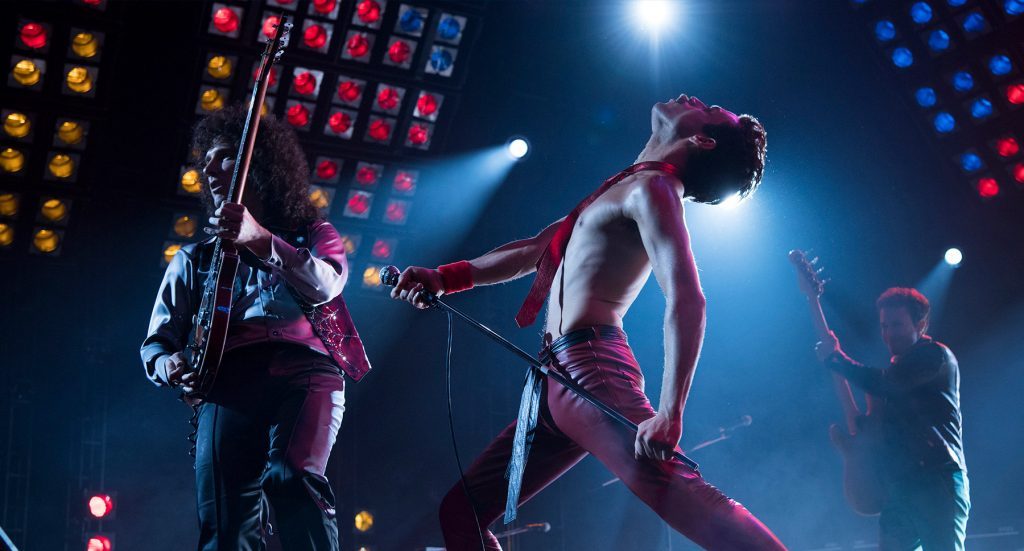 Arena Rock Icons: The buzzed-about Queen biopic is the No. 1 movie in the world. (Photo/20th Century Fox)

The band’s bridging of rock bombast and operatic grandeur is an anomaly of creative chemistry. At the risk of being overly hyperbolic, I’m tempted to say the songs Freddie Mercury, Brian May, Roger Taylor and John Deacon wrote are the product of magic, or at least the closest thing to it — Queen smashes such as “We Will Rock You,” “We are the Champions” and “Bohemian Rhapsody” are distinctive, timeless and irrepressible. The songs are greater than the people who made them, and their mere existence seems improbable, if not impossible. 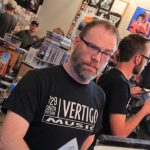 Hence, our fascination with music biographies, which reflect our desire to understand how and why humans are arrested by artistic provenance. On one hand, we want to deify writers and performers of anthems that stir the soul or inspire physical reaction. On the other, we’re compelled to see them removed from their pedestals and depicted as fellow members of our flawed species.

This is a long way of saying biopics can be tricky, and a big-screen dramatization of Queen, especially iconic frontman Freddie Mercury, is even trickier.

For lack of a better phrase, he’s more special than most of his ilk. And that may be why director Bryan Singer’s “Bohemian Rhapsody” is a mile wide and only a couple inches deep; why it’s colorful and reasonably entertaining, albeit not particularly insightful; why it turns an icon into a cliche. 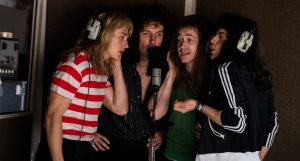 In the Studio: A scene from “Bohemian Rhapsody.” (Photo/20th Century Fox)

The movie dramatizes roughly 15 years of Mercury’s life, beginning with the formation of Queen and concluding with the band’s historic 1985 Live Aid performance. Every film based on a real person’s life inevitably takes dramatic liberty with fact and truth, and this is no different. It rearranges the timeline of key events in Mercury’s life, asserting that he temporarily broke up the band to pursue a lucrative solo career and do drugs and party a lot; in reality, they were burned out, and mutually agreed to take a break.

More problematic is how it moves Mercury’s 1987 AIDS diagnosis back two years to the days prior to Live Aid, suggesting that tragedy inspired their performance.

PLAYING WITH THE TRUTH; LITTLE INSIGHT INTO MERCURY

Certainly, such futzing with truth makes for better fictional drama — which is precisely what movies with actors and manufactured lighting and fancy camera angles are, no matter the subject. Yet, a solid argument can be presented that it does no justice to Mercury’s legacy, which is one of the film’s broad failures.

I have a greater problem with Singer and screenwriters Peter Morgan and Anthony McCarten’s rendering of Mercury as a corny movie character more than a believably complex individual. Case in point, a key scene early in Mercury’s musical career: he sleeps on a mattress on the floor, and a piano is his headboard. His hand reaches up, and what does he play? The opening melody of “Bohemian Rhapsody,” of course. 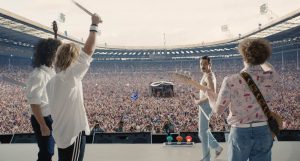 Why does this happen? Is it an inspirational lightning strike? Something he’s been working on for weeks? We don’t know the answer, except to say, he plays it because he’s in a movie that substitutes insight for flimsy, hackneyed moments that are so overtly written, we immediately feel like they never really happened, even if they did.

Rami Malek plays Mercury with the enthusiasm of someone who’s told that a film is going to be a celebration of its subject’s life. It’s an endearing performance. Malek is the right guy for the job, but the screenplay doesn’t deserve him. He’s asked to don an incorrigible dental prosthetic — Mercury was born with four extra incisors, and he credited his elastic singing voice to his unusual palate — and a phony wig to play the young Mercury, but is given no source of inspiration for the man’s genius.

What made Mercury tick? A scene in which he sits alone, staring into the middle-distance, then scribbling lyrics in a notebook and saying “That’s really good” offers zero insight. He presumably says this line to himself, but in truth, he says it to us, the audience in the theater, presuming we’re too thick to read the twinkle in Malek’s eyes, or understand that this is the type of film that wouldn’t bother to contrive a scene in which Freddie Mercury writes a song that’s not good.

CHARACTERS WITHOUT DIMENSION, BUT SOME HONEST EMOTION AT LIVE AID

With such a thin rendering of its lead figure, “Bohemian Rhapsody” invites us to notice its lack of interest in giving other characters any dimension, or a decent hairpiece, or a costume that doesn’t look lifted off the rack at Halloween City. The other members of Queen are underserved, only the blandest foils to Mercury’s extravagance, and there’s little depth to their personal or professional relationships.

Mercury’s one-time fiancee and lifelong friend Mary Austin is an empty vessel. Austin is played by Lucy Boynton, who must participate in a scene fumbling a key moment in Mercury’s life: “I think I’m bisexual,” he confesses. “Freddie, you’re gay,” is her reply. The real Mercury wisely, coyly refused to label his sexual identity, and the movie seems to lack the cojones to render him anything more than a vague complexity. 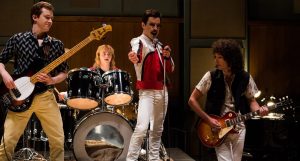 The same goes for the sex and drugs in Mercury’s life, the wild, R-rated stuff the movie skirts and hints at, but mostly avoids. “Bohemian Rhapsody” castrates the true stories of rock ‘n’ roll, settling on PG-13 blandness, questing for bigger box office returns. The film often struck me as an excuse to string together a series of brilliant Queen hits into a story, which would be acceptable if the final result better reflected the band’s style and flamboyance.

The Live Aid performance serves as narrative bookends, and when Mercury takes the stage in his Wrangler jeans, sunglasses and studded armband, it’s a rare instance of the film tapping into honest emotion.

But when the band plays “We are the Champions,” it only serves to remind us that we didn’t get a contrived scene earlier in the film in which the band writes the song — which is exactly what happens with “Another One Bites the Dust” and “We Will Rock You.”

Singer’s recreation of the concert seems to have no goal beyond stoking nostalgia, and it ultimately represents the film as a whole: slick and manufactured for mass appeal, but offering very little insight into what gave Mercury his drive to create, perform and inspire.