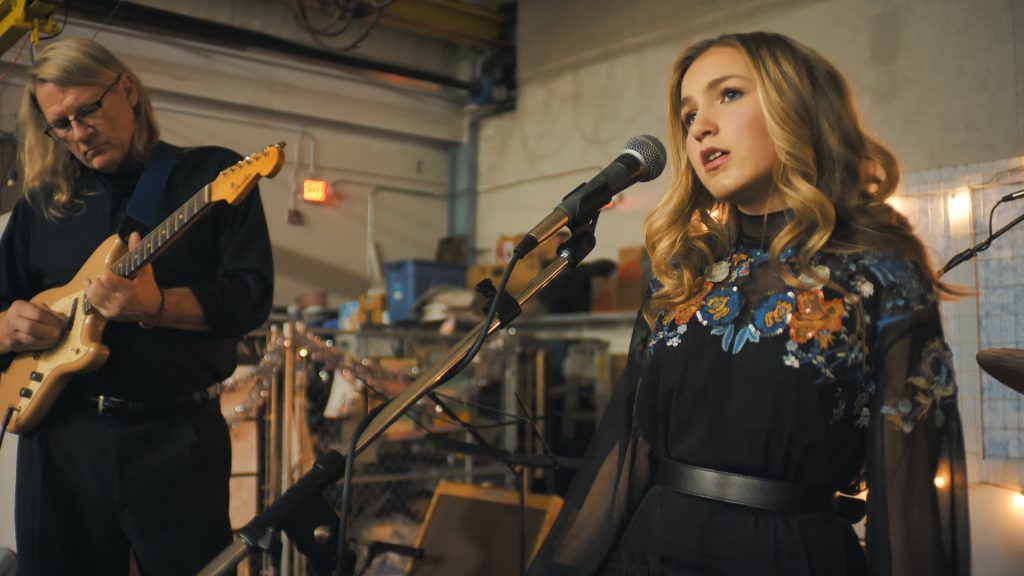 And 15-year-old Aspen Jacobsen from Commerce Township in the Detroit area stands out for a lot of reasons – especially as a songwriter with wisdom beyond her years.

“She comes with this really fresh outlook on everything,” said Ling, who first met Jacobsen at one of his flat-picking guitar workshops hosted by Wheatland Music Organization three years ago. 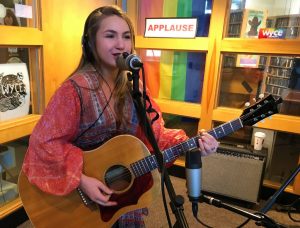 On the Air: Aspen Jacobsen performing during Local Spins on WYCE. (Photo/Local Spins)

“She’s an ancient soul and she’s got this whole pile of old memories back in her mind.”

The 10th-grader already has released two studio recordings. Her most recent full-length, indie-folk album, “Love Each Other Right,” produced by Dominic Davis (Jack White, Steppin’ In It), came out in November.

Credit her role as Gretl in a production of “The Sound of Music” as a 7-year-old for starting her on the path toward stage performances (including theater, dance and the Michigan Opera Theatre Children’s Chorus), with the youngster eventually picking up guitar and creating her own music.

“I felt like I wanted something more and something that represented me, and songwriting was kind of my outlet for that,” said Jacobsen, who travels to West Michigan regularly to take music lessons from Ling in guitar, mandolin, fiddle and banjo.

On Friday, she and Ling dropped by WYCE-FM’s Studio X to perform a couple of Jacobsen’s songs for this week’s edition of Local Spins on WYCE. Watch their performance of “Little Arms” – which Jacobsen penned at a Great Lakes Music Camp session – here with the full radio show podcast below.

Jacobsen comes off as that rare young talent with an ear for the classics and the heart of a teenager: She was once a big fan of Taylor Swift but also embraces the music of Joni Mitchell and Patsy Cline. 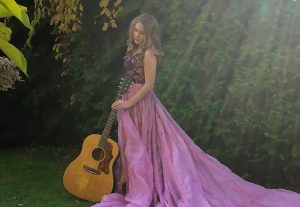 Moving Forward: Jacobsen has more recording and touring in her future. (Courtesy Photo)

So what can folks expect from her show on Sunday night? “Storytelling and talking about my songs and my 15-year-old teenage life.”

As for the future, this young singer with a big voice plans to continue performing (including 2020 appearances at Buttermilk Jamboree and Wheatland Music Festival) as well as recording some new songs — songs that seem to resonate with audiences for varying reasons.

“It’s great that everyone connects to my songs in different ways,” she said.

Episode No. 280 of Local Spins on WYCE – which showcases local and regional music at 11 a.m. Friday on WYCE (88.1 FM) – also boasted the on-air debut of seven new songs, including music by Lady & Gentleman, Singing Lungs, Pretoria, Dennie Middleton, Cameron Blake, Mark Harrell and Deerfield Run, as well as tracks by The Go Rounds and Rachael Davis (this week’s musician’s pick by Jacobsen). Listen to the full radio show podcast here.