The passionate Women’s History Month tribute to icon Aretha Franklin features more than two dozen singers and musicians from across the state. Watch the premiere at Local Spins. 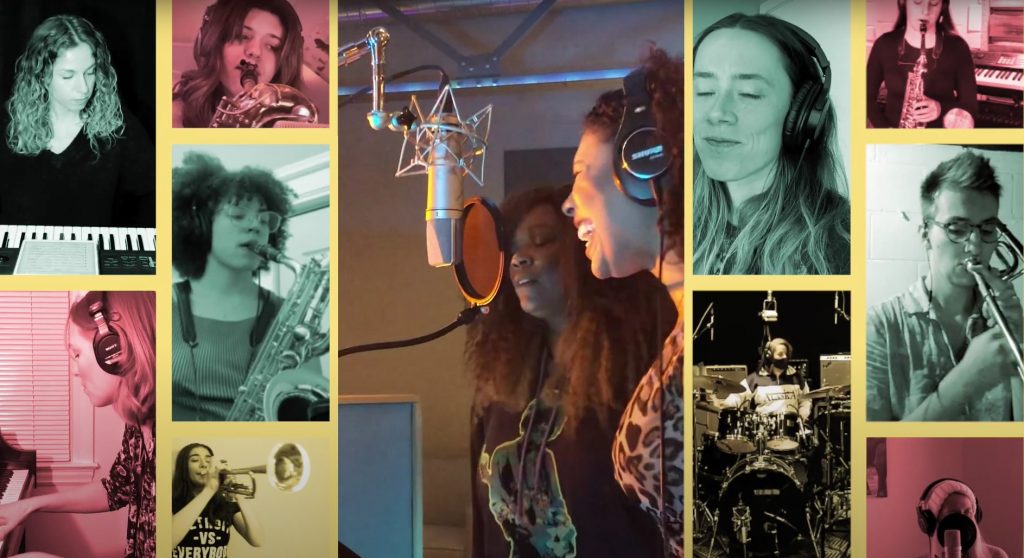 ‘Extraordinary Diversity’: Just some of the Michigan artists who collaborated on the ‘Respect’ video.

SCROLL DOWN TO WATCH THE VIDEO, LISTEN TO THE TRACK

Today, to commemorate International Women’s Day, more than two dozen female singers and musicians from across the state have joined forces for an inspiring video tribute to Detroit legend Aretha Franklin with their stunning take on the classic, “Respect.”

The cover song and video – premiering here at Local Spins – was recorded at five different studios and at several artists’ homes, then compiled and mixed by female engineers Cynthea Kelley and Maggie Heeren at La Luna Recording & Sound in Kalamazoo.

“I am so honored to have been a part of the project for the Michigan Music Alliance’s celebration of International Women’s Day, and having the amazing opportunity to sing on one of the most iconic and legendary songs of all time, ‘Respect,’ ” said Grand Rapids singer Sarena Rae, who traded lead vocals on the project with Serita Crowley of Serita’s Black Rose.

“It is and always will be a privilege to have been a part of such an enormous project featuring incredible female talent.”

Added Crowley: “It felt wonderful to lend my vocals for a great cause since the pandemic has brought the live music scene to a devastating standstill for everyone. … It was truly an honor to pay homage to the ‘Queen of Soul’ by singing lead on her timeless song. By me being a respected black African-American singer-songwriter and musician in our local music community myself was super-exciting in itself and a blessing.”

The Michigan Music Alliance, which organized the ambitious recording project that involved a host of musicians and engineers, called it an “all-female jubilee of joyful sounds offering homage to Michigan’s own ‘Queen of Soul’” with 30-plus female artists asserting “the outright divine power of Michigan women in music.”

Elle Lively, executive director of the alliance, said the project highlights “the ultimate power that stems from prioritizing collaboration over competition” while celebrating a legendary and influential female artist such as Aretha Franklin. She added that it also spotlights “the extraordinary diversity and depth of the Michigan music community as a whole.”

CELEBRATING ‘THE UNIQUE POWER THAT ALL WOMEN POSSESS’

That “depth” on the “Respect” cover project includes Detroit drummer Gayelynn McKinney who performed with the late Franklin. She laid down her drum track at Plymouth Rock Recording Co. in Plymouth.

Other musicians and singers featured on the recording include: 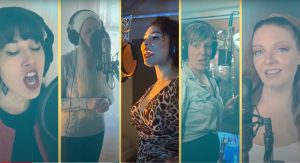 ‘Collaborative Work’: Serena Rae with some of the backing vocalists.

“This project is empowering and inspiring,” said Sarena Rae, who recorded her vocals with Crowley at Third Coast Recording.

“This is a project that is bigger than what we can even conceive. It’s much more than a collaborative work between female talent; this collaborative effort will leave a positive impact on all women that watch or listen to this tribute.”

The International Women’s Day and Women’s History Month release commemorates “an anthem that all women everywhere can be empowered by,” she said, and “celebrates women and the unique power that all women possess: to create, build, invent, nurture and lead.”

Sarena Rae added that she hopes women everywhere “are reminded of the strength, radiance and essential voice that they carry. I find myself to be very grateful and extremely privileged to have had my voice involved and spotlighted in this beautiful project.”

Watch the video – which involved the collaboration of Grand Rapids’ Dogtown Studio – below.

To support the Michigan Music Alliance, a non-profit serving the Michigan music community through education and community-building opportunities (including the upcoming online Spread the Music Festival that takes place at the end of March), go online here. 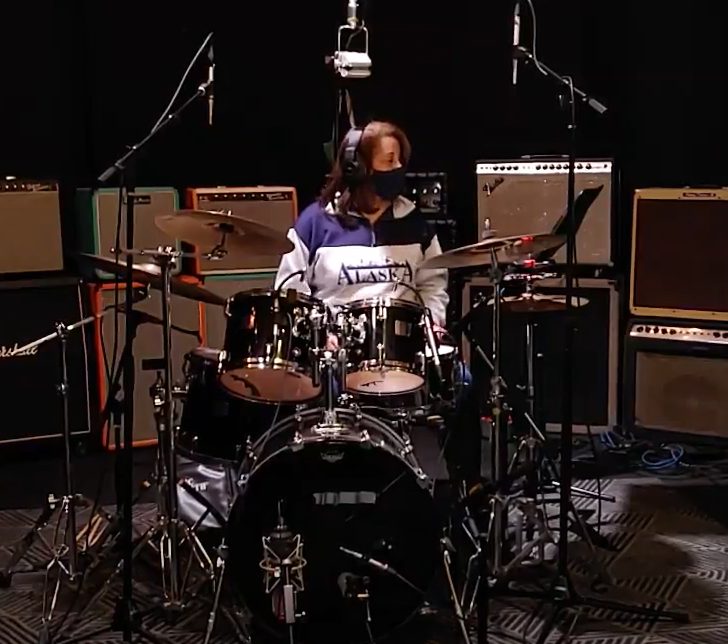 In the Studio: Detroit drummer Gayelynn McKinney recording her track for the project. (Courtesy Photo)