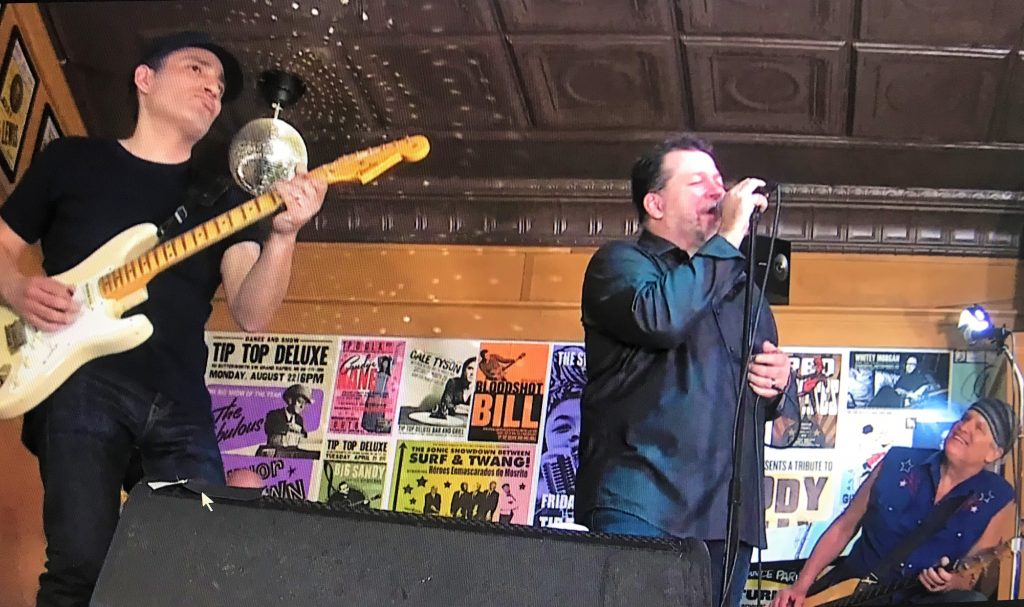 The Tip Top Deluxe Bar & Grill fired up the blues once again on Friday night.

Shuttered for several weeks due to the stay-at-home coronavirus pandemic, Grand Rapids’ beloved West Side haunt welcomed back Hank Mowery & The Hawktones featuring Junior Valentine for a smile-, laugh- and jam-filled evening of Hound Dog Taylor, Lynwood Slim, B.B. King and much more.

Granted, the bar was empty save for co-owner Ted Smith and video whiz Eric Macke, who handles video production for the Grand Rapids Griffins and who assembled an impressive multi-camera shoot for the evening.

But hundreds of fans joined online for the Facebook live-stream organized by Junior Valentine as a fundraiser for the Tip Top and its employees. (Folks can donate via the Tip Top GoFundMe campaign or by sending a PayPal payment to Smith at theodore_smith@sbcglobal.net.) 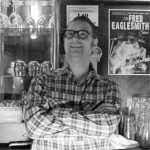 To say it was joyous watching a stellar West Michigan band of veteran musicians rocking the stage at the Tip Top again would be an understatement. By the end of the second set, 2,400 people had viewed the show filled with fiery guitar and harmonica solos, camaraderie and blues classics. And more than $1,400 was raised for the cause.

Even without a beer-swilling audience in-house, the special vibe of the Tip Top filtered through the computer screen with virtual shouts of approval from fans who sent messages such as “Loving this,” “I have missed live music,” “Tasty as always” and “Great stuff.”

“I was just thinking if I was at home watching y’all, I’d be having a ball,” a grinning Junior Valentine gushed at one point from the stage during the two-hours-plus show

Indeed. Anyone who tuned in had a blast, with many expressing a nostalgic longing for a return to the Tip Top’s robust live shows of yore.

If you missed it, here’s the full performance video, which tops the Local Spins list of “can’t-miss” videos of Michigan bands and solo artists as part of this weekend’s music-on-the-silver-screen roundup. Enjoy.

Tips for the Tip: Hank Mowery & The Hawktones featuring Junior Valentine
(Band performance starts at about the 50-minute mark)

The Sweet Water Warblers, “Mother’s Voice” – For Mother’s Day, the Sweet Water Warblers super-group (May Erlewine, Lindsay Lou and Rachael Davis) released this special video paying tribute to moms after asking fans to submit pictures of videos of “what a nurturing mother means to them.” The song appears on the group’s brand new album, “The Dream that Holds this Child,” which was released on Friday.
The American Hotel System, “Another Road” – As part of the Grand Rapids rock band’s “Postcard Series” of singles, The American Hotel System released a video for “Another Road,” which deals with the topic of substance abuse and alcoholism. Learn more about the band on its website.
Full Cord Bluegrass, “Downtown” – West Michigan bluegrass faves Full Cord released this rousing video of a song by mandolinist Brian Oberlin (written while he was living in Portland, Ore.) that was recorded with a live studio audience at Third Coast Recording Studio in Grand Haven by Dogtown Studios in partnership with Crooked Tree Creative.
Upon Wings, “Amazing Grace” – Detroit rock artist Upon Wings just released this uplifting video version of “Amazing Grace,” with Seether guitarist Corey Lowery. Learn more about Upon Wings here.