Until COVID, Benton Harbor’s The Livery was a favored performance spot for many acts, reflected in this Top 10 playlist. And the venue has plans for upcoming ‘sound stage’ sessions amid the pandemic. 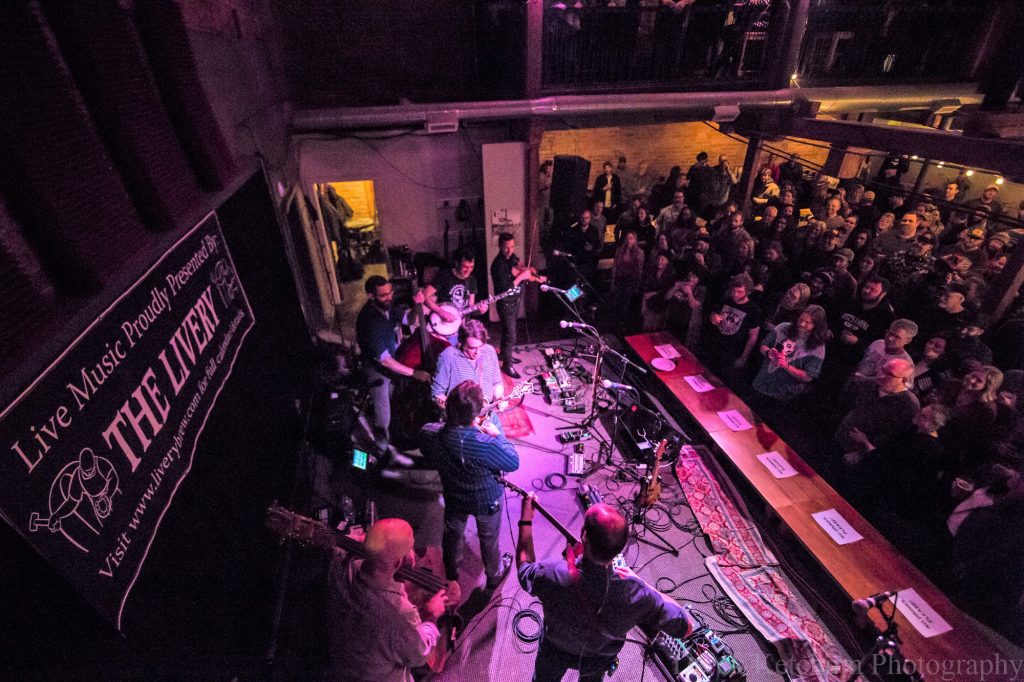 A Top 10 Show: The Travelin’ McCourys and Jeff Austin Band on stage at The Livery in 2019. (Photo/Derek Ketchum)

EDITOR’S NOTE: For our recent Tuesday Playlists, Local Spins has showcased troubled West Michigan venues whose live music has mostly been silenced due to COVID-19. Today, Brandon DeJaynes, booking and promotions manager for Benton Harbor’s The Livery, showcases a Top 10 soundtrack featuring bands and solo artists who’ve played the brewery. Scroll down to listen on Spotify and go to saveourstages.com to donate to the National Independent Venue Association’s emergency relief fund to aid vulnerable venues.

Founded in 2005, The Livery is an independent brewery nestled in The Arts District of downtown Benton Harbor and housed in a 120-year-old, historic brick building. Serving up award-winning “hand-forged” beer, locally sourced food offerings, and playing host to 125-plus concerts each year, the brewpub has carved a devout following in Michigan’s southwest corner.

Booking and promotions manager Brandon DeJaynes outlined how COVID has altered things: “The current pandemic has certainly shifted that model, all but handcuffing any type of large gathering. Currently, we are offering outdoor dining in the extended (and heated) beer garden, along with curbside to-go for beer and food orders. 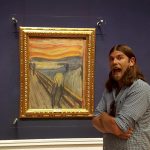 In terms of live entertainment, The Livery has been working to develop ‘sound stage’ sessions for artists looking to explore new avenues in the virtual music realm. We are still in the beginning stages, with a few kinks to work out, but we want to open this avenue for bands.

Since March, we have canceled many shows and we want to give opportunities to those artists first, before opening the door to a wider reach of talent. These sessions will focus more on a polished product than a live performance, although we are open to possibilities within the format. Our hope is to stay on the pulse of the Michigan music community, work to continue engaging our audience and also reach a wider audience in the process.

The day that we can safely bring a live audience into our venue will be a glorious one indeed, but we are taking a guarded approach with safety in mind above all else. While we can’t pinpoint a date for return, we remain hopeful that it will be sooner than later.

Until then, here is a Top 10 playlist from artists that have played at The Livery over the 2019-2020 concert season. So many great bands could have easily made this list. Hope you enjoy it.”

Read more about The Livery in this Local Spins Venue Spotlight.

1. “Another American Down,” Brian Vander Ark with Jeff Daniels (2016) – Brian has played our room many times since we opened in 2005, and in recent years, his shows have served as our calendar kick-off concert. His shows here are always very intimate, and often completely made up of fan requests. Brian couldn’t be a nicer guy, too. All the more reason to feel comforted by his timeless music.

2.) “Pattern and Vanity,” The Go Rounds (2019) – The Go Rounds have traveled the long road with us. Having just a handful of people at their first show here, they have built a loyal following that packed us near capacity on their last visit. In addition to their own set of high-wire antics, we talked them into doing a Talking Heads set for one of our beer release events. Their latest album, “Whatever You May Be” is one of my personal favorites from the past year. I listen to it often, and this track is one that always grabs me.

3. “Smooth Move,” Cory Wong (2020) – We were lucky enough to grab a date with Cory Wong on his first solo national tour in 2018. It was a pretty proud moment for us to hang the tour poster on our wall with Benton Harbor next to major market cities like Chicago, New York, Philadelphia and major venues like The Fillmore as stops. It’s not often that we grab major artists, so we always try to make an impression. Apparently we did, because he asked us if he could come back again. He did, and it was another stellar night here at The Livery. For this track, I simply picked his latest release since the guy is so prolific.

4. “Sleeping Giants,” The Crane Wives (2015) – The Crane Wives are another great success story here at The Livery, building one of the most fervent fan bases to party at our brewpub. Their live shows are always captivating and their harmonies are second to none, plus they are my mom’s favorite band, hands down. “Sleeping Giants” is just an undeniable rocker, and it always brings the house down.

5. “Travelin’,” The Travelin’ McCourys (2018) – When I saw that The Travelin’ McCourys were taking “The Grateful Ball” tour back on the road with the Jeff Austin Band, I had to book it. We did, and it turned out to be pretty good timing with the band winning a Grammy Award for best bluegrass album” just a few weeks before the show. Needless to say, it sold out and we created quite a nice buzz from that night. The band hung out until the wee hours, and we made sure to show them a good time. They made another triumphant return this past March just before we closed down and it stands as one of the last live shows that I have seen to this day. Here’s a fast-picker called “Travelin'” from their award winning self-titled album.

6. “Let Love Light The Way,” Seth Bernard (2020) – Seth and his Earthwork Music Collective are a crew that we have worked very closely with over the years. Our collaborations have spawned a monthly “Earthwork Sunday Showcase” that united non-profits in our area with music as a platform for change. The culmination was a “Non-Profit Block Party” last November and a high-water mark for the series. Seth has come into our venue under several different configurations, always enlightening with his words and inspiring with his music. His newest release, “Let Love Light The Way,” is a perfect example of the charisma he carries.

7. “Beast Within,” The Andrew Fisher Quartet (2019) – Andrew came to me with an idea to host a jazz night at The Livery back in 2015. After a chat, we established what would become “Sunday Night Jazz” once a month. Over this time, Andrew and his band began to develop quite the following, which is no easy feat on a Sunday. Soon, AFQ began headlining its own shows, including an album-release in 2019 and its annual “Stevie Wonder Tribute” show, which always hits capacity at The Livery. A true testament to our local crowd and local talent, Andrew Fisher Quartet is one of the most in-demand jazz groups in our region.

8. “Bad Dog,” Bonerama (2017) – Bonerama is a powerhouse brass band that formed out of Harry Connick Jr.’s big band, performing with everybody from R.E.M. to Warren Haynes. So when we get the ‘Bones on the calendar, we know it’s going to be a great time. The band’s latest stop came in February of 2020, right at Mardi Gras. The place was packed, the dance floor was shakin’, and the band was inspired to play for nearly four hours. It seems like both yesterday and a lifetime ago. These house favorites definitely deserve a nod here.

9. “Midnight Stranger,” The Black Lillies (2018) – Longtime favorites here at The Livery, we even have a cyser named after them. The Black Lillies play this moody, mysterious, outlaw country that perfects tension-and-release peaks. Chief songwriter Cruz Contreras was raised just down the road and treats our venue as a homecoming stop of sorts. The ensuing concerts are always highly inspired, and they are one of the most fan-requested bands to be brought back in. And, as soon as we can, we will.

10. “Mongrel,” Bonehawk (2020) – BoneHawk is definitely on the heavier end of the spectrum in our programming, but we can’t fight the urge to bang our heads every once in a while. The Kalamazoo outfit has rocked the house a few times over the years, but happens to be on our stage as I type this. Guitarist Cam Mammina actually works for us and came to me with a proposal for the band to use our stage and system for a promo video shoot. The band’s latest album, “Iron Mountain,” has sold well in Europe, and a tour would have been in the works had COVID not shut down travel. The next best thing in the band’s eyes was to create a hard-hitting set of new material to showcase. Enter The Livery. As the planning continued, we realized this model may be viable for artists wanting to elevate their online presence. So, we will begin booking bands into our “sound stage” for sessions. This likely will be angled more toward high-quality post-production and editing for a polished product, rather than a “warts and all” live-stream.


NOTE: Andrew Fisher Quartet’s “Beast Within” isn’t available on Spotify, but watch the video for the band’s live performance of the song above.