For the final Tuesday Playlist of 2020, Local Spins asked the folks at Founders Brewing Co. to compile a Top 10 list of favorite performers. It’s a wide-ranging and impressive roster of artists from near and far. 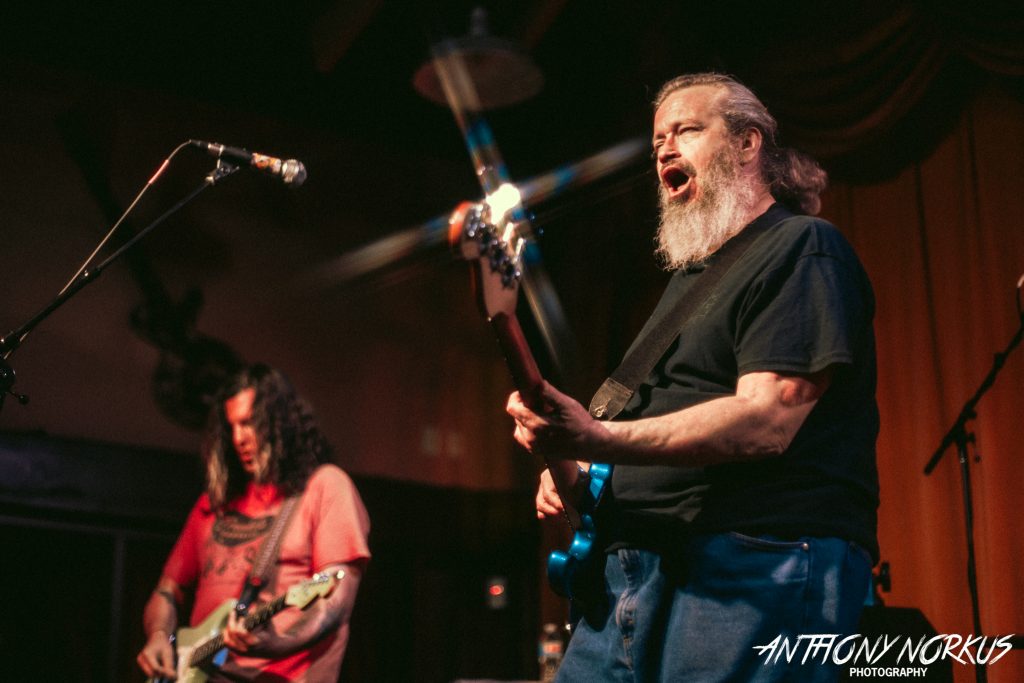 A Top 10 Show: The legendary Meat Puppets fired up the Founders Brewing stage in 2017. (Photo/Anthony Norkus)

EDITOR’S NOTE: Since summertime, Local Spins has regularly showcased West Michigan venues whose live music has been silenced due to COVID-19. For the final venue playlist of 2020, Local Spins today presents Founders Brewing Co.’s Top 10 soundtrack of artists who’ve performed on its taproom stage over the years. Enjoy — and Happy New Year.

Until COVID shut everything down in spring of 2020, Founders Brewing Co. in Grand Rapids was one of the city’s go-to hot spots for live music on Thursdays and Saturdays — as well as occasional Sundays and those popular Tuesday night open-mic sessions.

So, the Founders staff had plenty to choose from when compiling this soundtrack of stars who’ve graced its stage over the years.

Explains Isabelle Golczynski, Founders’ retail marketing coordinator: “The theme for this playlist was the best taproom performances ever, as chosen by some of our employees. This was a fun project for us, as we all miss live music, especially taproom shows, immensely.”

Of course, the hope is that live shows will return sometime in 2021.

“We’re working hard to continue to provide to-go beer and food options from both our Grand Rapids and Detroit taprooms throughout the most recent shutdown,” Golczynski said. “In fact, we just launched a 20 percent off growler special when you purchase $15 in food. We hope to return to hosting live music once again, but plan on waiting until it is safe to do so, which could take many more months.”

In the meantime, shop for Founders merch in the online gift shop.

1. “You Were Right,“ Built to Spill (1999) – “The energy in the Grand Rapids taproom was electric (on May 31, 2015). Built to Spill was one of the biggest names to grace our stage to date, the floor was packed, and everyone was singing along to every song. I remember standing on top of the bar when they played ‘You Were Right’ and anything felt possible. Just a magical night.” – Jon P. (Revisit the Local Spins concert review.)

2. “Rooftop,” Aaron Kamm and the One Drops (2012) – “Not a huge crowd, but I have never seen more energy and emotion coming out of a performer than Aaron Kamm, like EVER! That dude is a man possessed when he has that Stratocaster in his hand, HOLY SMOKES!!!” – Chad A.

6. “Beer,” Mustard Plug (1997) – “These hometown boys rip it every time. I’ve seen them a hundred times from Festival of the Arts, to the old Local First Street Fest, to Founders Fest, to taproom shows, to basement shows at a friend’s house and they’re just always happy to be putting on a show.” – Andrew L.

7. “Alone with Him,” Chance Jones (2009) – “Every Chance Jones show in the taproom always brought all of my favorite people together: employees, friends, amazing musicians from other bands. During their prime, several of the band members worked at Founders, and we were a super close-knit group. When Josh Burge (AKA Chance Jones) moved to L.A., the band dismantled. Four years ago, Josh was coming home for the holidays, and the band played two reunion shows – one at Long Road and one at Founders. They filled the taproom like they always did with unrepeatable energy and love, while those of us who not only love the music they make, but all of the incredible individuals who make up the band, danced, hugged, sang, cried and cheered while they gave us an experience so dear to us and I had missed so much. And then we all danced to Afro Zuma (another incredible Founders-centric band) for the rest of the night. I can’t really think of a better feeling than rocking out to your friends with your friends. For me, Chance Jones is the definition of that.” – Molly R.

8. “When it Rains It Pours,” Twiddle (2011) – “Other than having one of the best guitar players in the jam band world (Mihali), we got to witness Twiddle right before they took the countries festivals and stages by storm!” – Benjamin T.

9. “Donna,” Rubblebucket (2018) – “Rubblebucket brings so much energy to a space! When performing at Founders, they were one of those bands that you just couldn’t ignore. Their horn section could reach every corner of the room. This combined with a great Founders beer gave everyone the itch to dance.” – Cara B.