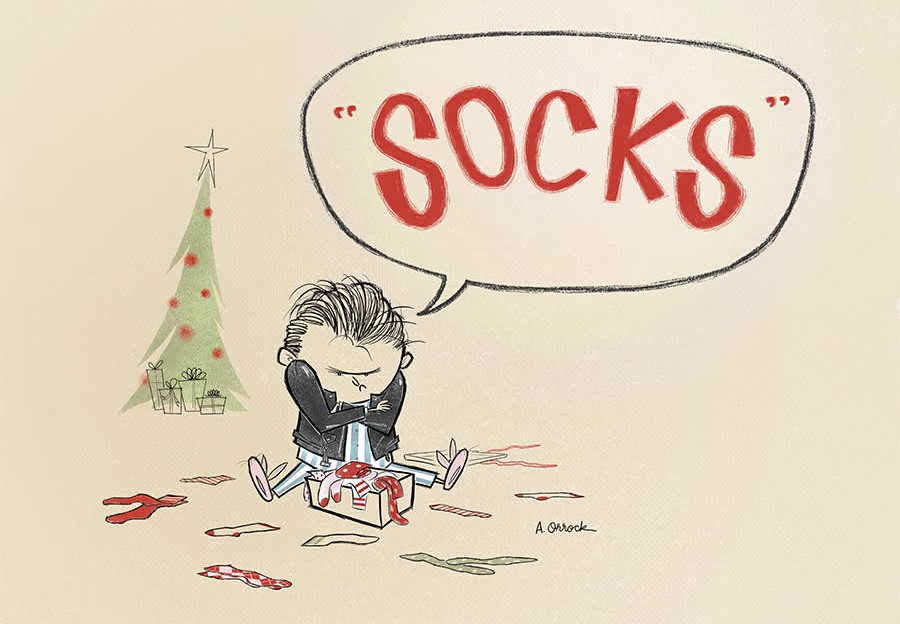 Weary of the same unimaginative, tired ol’ seasonal soundtracks being pumped out ad nauseam by shopping malls, dental offices, skating rinks and certain radio stations at this time of year? 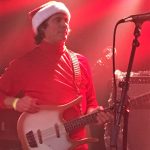 Schichtel, by the way, just sledded back to Grand Rapids from touring in holiday style with McPherson and Eddie Angel of Los Straitjackets so he’s well warmed up for these off-the-beaten-path Noel nuggets.

In the Spirit: Schichtel on stage with a couple of his rock heroes.

And The Concussions will heat things up even more at 8 p.m. Saturday (Dec. 8) at Tip Top Deluxe Bar & Grill in Grand Rapids, with fellow instrumental surf rockers The Madeira from Indianapolis and The Troubadours. Expect a packed house of holiday revelers.

Now, crank up the volume and trim your tree with merry musical marvels unlike anything you’ll hear anywhere else.

1. Jessie Mae Hemphill, “Merry Christmas, Pretty Baby” – Primal raw and loose. You gotta be loose. Some people are born with it. Some people chase that sound and feel their whole life.

2. Nathaniel Mayer, “Mr. Santa Claus” – From the Fortune label, Mayer was one of the most raw and original singers to ever come outta Detroit. “Village of Love” exemplified the sound of Detroit. That famous “in the red” sound was a perfect fit for Mayer’s magic.

3. Los Straitjackets, “Here Comes Santa Claus” – Los Straitjackets featuring Eddie Angel always deliver. Considered a modern Link Wray by many, Eddie’s guitar playing and tone are always revered by all surf and garage rockers. They add their own twist to this classic. They also just released a new Christmas album this year.

4. “The Snow Miser and Heat Miser” from the 1974 Christmas TV special, “The Year Without Santa Claus” – Ok, what’s a playlist without bringing up your childhood Christmas memories? I must have seen this special more times than allowed. I hear these Rankin and Bass songs to this day when I’m alone or with friends or recording people or on stage or…well, you get the idea. Thanks a lot Snow and Heat Miser! I have both of you on my mantle this time of year and am now polluting my daughter’s brain to keep this vicious cycle unbroken.

6. Slim Harpo, “Blues Hangover” – Who hasn’t felt like this at least 68 times in their life after a Christmas party? Slim Harpo knows a good groove and a bad headache. Oh and listen to that recording!

7. The Ventures, “Scrooge” – The most influential instro band of all time with one of the coolest Christmas records of all time. What’s not to like? Nokie Edwards, Mosrites and fuzz! Here’s an odd and creepy one.

9. Vince Guaraldi Trio, “My Little Drum” – When I was in Sausalito last time I made a point to go to the trident and sit where Vince Guaraldi recorded “in person.” The guy working there couldn’t believe I asked seeing how everyone just wants to smell the seat where Janis Joplin would get drunk. Not this dood. “A Charlie Brown Christmas” might be the best Christmas record of all time. Just putting it on warms my cockles.

10. Baby Jane & The Blenders, “You Trimmed My Christmas Tree” – A baritone sax solo and a title like that? I’m in!