The electronic music duo capitalizes on buzz about its new release with hefty airplay on WYCE; Brad Fritcher’s MOODS makes its chart debut, too. Fritcher plays a farewell show at SpeakEZ Lounge on Wednesday.

SCROLL DOWN TO LISTEN TO TRACKS FROM THE CHARTED ALBUMS

Pink Sky may seem like just another one of many new electronic music projects, though it certainly stands out for its live analog instrumentation that creates “an opportunity for self-reflection” while helping people “connect to the emotionality” of songs created by the Grand Rapids duo of Ryan and Angelica Hay. 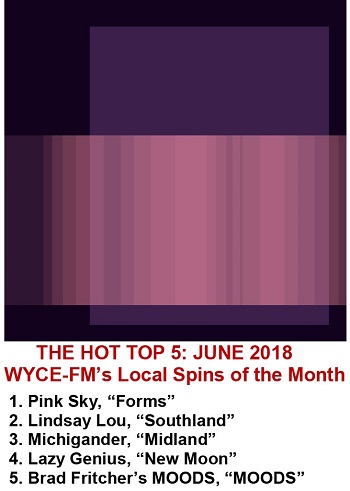 But it is also an integral part of this couple’s life and personality.

“Pink is much more than just a band to us,” Ryan Hay maintains. “It’s become the driving force in our lives, connecting us with ourselves, with each other and with our community. It’s the result of living and working through trauma, of setting an intention, of relinquishing previous identities and fears, and, mostly, of taking two big steps forward into the scary unknown — of putting ourselves out there in ways we never have before. So, it means a lot.”

Consequently, it also “means a lot” to the duo that Pink Sky’s new album, “FORMS,” shot to the No. 1 spot on the Local Spins Hot Top 5 chart for June – even though the 12-track recording doesn’t even officially get released until Aug. 25, when Pink Sky stages its album-release party at The Pyramid Scheme in Grand Rapids (with Wing Vilma, Bronze Wolf and Darkly). A couple of tracks from “Forms” are, however, already available via bandcamp.com.

“It’s an honor really, that we don’t take lightly,” says Angelica Hay. “We are really grateful for the support we’ve been getting from WYCE since we sent in our album in June. The positive response from programmers across the country has exceeded our expectations, and it’s particularly heartwarming to feel such tremendous love in our hometown.” 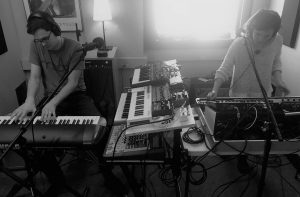 Connecting with Fans: Pink Sky in the studio at WYCE. (Photo/Local Spins)

Ryan Hay adds that the duo also took their “band identity” into the studio, “recording the album like we play live, and that energy may resonate with many of our fans and WYCE programmers who are drawn to live music.”

Pink Sky’s “FORMS” was only one of two new albums to debut on the June chart, with jazz trumpeter Brad Fritcher’s MOODS snagging the No. 5 spot on the chart which lists the local and regional albums that received the most airplay last month on WYCE-FM (88.1). Fritcher, who is relocating to Pittsburgh, is playing a farewell show with MOODS at 8 p.m. Wednesday (July 11) at SpeakEZ Lounge as part of the Local Spins Wednesdays series. Get more info about that show online here. 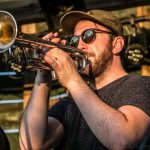 “We are getting a lot of great feedback on ‘FORMS’ regarding the production quality, cohesiveness and vibe of the album, which is encouraging to say the least,” Angelica Hay notes.

“Some common feedback after our live shows often goes something like, ‘I don’t really like electronic music, but I really liked that,’ which is a high compliment for us, because in many ways we identify as a band more so than electronic musicians or producers, even though we are both and we love electronic music. Playing live instruments at shows is such a profound experience, and it’s one that isn’t common enough anymore, especially in the electronic genre.

“So, we designed Pink Sky to function like a band from the beginning, which means performing all our instruments live with no computer on stage, so the energy of the audience can have a significant impact on what we play and how we play it. This allows us to intimately and uniquely connect with our music in each performance, allowing our audience to connect more with us and with the songs.”