West Michigan’s Agri-Med & Local Spins announce a contest asking readers for their favorite pot-flavored tunes to be revealed in a playlist on April 20. Plus, some local artists pay tribute to marijuana in song.

Smoking Tunes: Many West Michigan musicians have put marijuana front and center in their songs.

Music and marijuana were made for each other.

And with Michigan’s legalization of recreational marijuana – aka, weed, pot, grass, ganja, green, bud – there’s even more reason to celebrate the popular plant in song.

Indeed, there’s a rich songwriting tradition when it comes to bands and solo artists hailing the beauty and charm of pot, from Bob Dylan’s “Rainy Day Women #12 and 35” to Peter Tosh’s “Legalize It” to Cypress Hill’s “Hits From the Bong” to Weezer’s “Hash Pipe” and many more.

Esteemed Plant: And the subject of many a ditty. (Courtesy Photo)

Heck, Cab Calloway’s “The Reefer Man” regaled fans way back in the 1930s.

So, Local Spins has teamed up with Agri-Med – which operates retail provisionaries in Muskegon (Park Place), Nunica (Exit 9) and Edmore, with more on the way – for a month-long contest seeking West Michiganders’ Top 20 favorite marijuana anthems of all-time.

It all leads up to 4/20 – yes, April 20, the international holiday paying tribute to weed – when we’ll reveal the Top 20 songs as part of a special Local Spins playlist.

The names of those entering picks for their favorite songs about pot will be placed in a drawing, with winners chosen at random to receive a special gift pack created by Local Spins and Agri-Med. Each gift pack will include T-shirts (including a special 4/20 shirt and “Support Michigan Music” shirt from Michigan Music Alliance), CDs by local artists, an Agri-Med gift
card and swag bag, a Pond Jam festival pass and more.

Entering is easy: Just email john@localspins.com with the title of your favorite marijuana tune and why you love it so much by April 12. Include your name, age and the city you live in and make sure MARIJUANA MELODIES is in the subject field. We’ll choose four lucky winners and announce their names when the Top 20 list gets the big reveal on 4/20. You must be 21 years old to win.

To kickstart your brain cells, here are links to lists from a couple of other publications:

UDiscoverMusic.com – Best Songs About Marijuana: 25 Tracks To Help Get Your Buzz On

We also want to encourage you to consider local musicians as part of the campaign, so we’re spotlighting a few West Michigan artists and bands who’ve created smoking hot tracks about marijuana, including new ones released earlier this year that will help get your musical buzz on.

Inhale deeply, enjoy the music, videos and back stories about these groovy tracks, then submit your favorite marijuana melodies here.

PARENTAL ADVISORY: These videos contain images of marijuana use and some adult themes.

The bassist, co-frontman and co-founder of Holland rock band Brother Adams says the COVID lockdown gave him “a little extra time to be creative” and that includes this ditty about a smoke break. “My wife and I gave my sister Catt a ride after work one night and the first thing she said to us was something like, ‘So, I was listenin’ to Lizzo and dancin’ ’round the deli…’ That sounded like lyrics to me, so I wrote the rest of the lyrics from Catt’s perspective, made a beat, and then I convinced her to come over and rap into a mic for her first time ever.”

Driesenga says the track “will appeal to stoners, of course. But I think anyone who likes to have a good time and doesn’t take life too seriously will vibe with this. I think those who work in the service industry will especially get a kick out of the video.”

Driesenga says he smokes weed daily (“I’m an anxious guy and burning a little herb takes the edge off — simple as that”) and he’s celebrated Michigan’s move to legalize marijuana.

So West Michigan’s Diff & Dudley, aka musicians Mitch Wood and Jack Leaver, released a retro-country studio album in 2016 that featured this tribute to marijuana as its lead single with the classic line: “Sit down, shut up, smoke weed/A friend with weed’s a friend indeed.”

Wood, who penned the tune “inspired by real life” before the state’s legalization move, says “it’s high time” pot was decriminalized and figures the track will appeal to “anyone with a sense of humor.”

“It is just a fun song, reminiscent of the hippie country of the ’60s and ’70s,” adds Leaver. “A lot of my younger friends dig it.”

As for their own favorite pot tracks, Wood favors Fraternity of Man’s “Don’t Bogart Me,” while Leaver chose Neil Young’s “Roll Another Number (For the Road).”

Grand Rapids rapper Ajax Stacks has “a decent history of doing marijuana 4/20 tracks,” with his first-ever music video released on April 20, 2011. “Since then, we’ve tried to be decently consistent with keeping up the tradition each year,” he said. (The featured track above was released in 2015.)

He gives Michigan’s decision to legalize marijuana “5 out of 5 stars.” 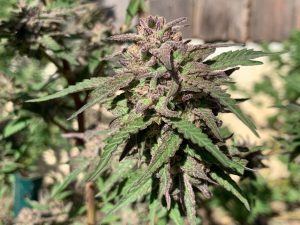 “Instead of wasting financial resources on trying to police an illegal drug, the state can now use existing and even find newer ways to build economic opportunities for our citizens, all because of a plant. I’ve personally known individuals who have decided to switch their entire careers and go into the cannabis industry due to either it being a lifetime dream of theirs, or simply because COVID-19 has had their current business at a standstill for over a year now.”

You can check out his latest smoke-related track via Soundcloud here.

Released several years ago, this entertaining ditty by Michigan-based singer-songwriter Nicholas James Thomasma is accompanied by a whimsical animated video sure to please imbibers everywhere.