West Michigan DJ, Local Spins columnist and electronic music guru Todd Ernst previews this weekend’s mega-fest in GR’s Belknap Park — his artists to watch, tips for a better experience and the inside dope. 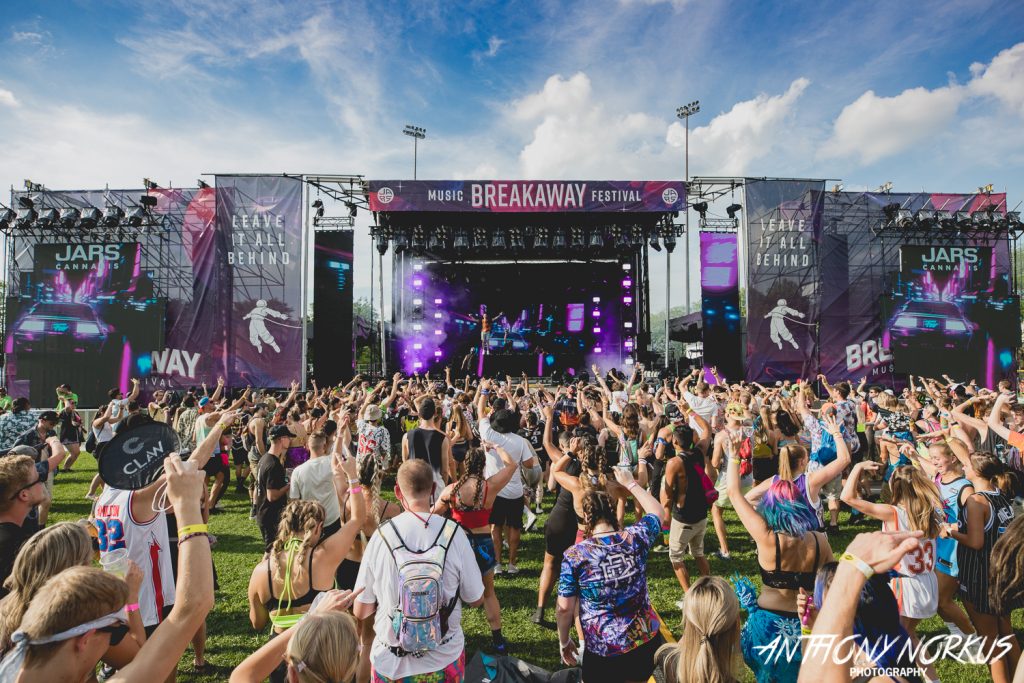 Back With an Even Bigger Bang: Breakaway returns to GR’s Belknap Park Friday and Saturday. (Photo/Anthony Norkus)

SCROLL DOWN FOR SCHEDULE AND VIDEOS

One of my favorite things about Breakaway Music Festival is not only the organizers’ commitment to a quality festival environment, but also their ability to make incremental changes each year in the magnitude of their talent offerings.

While many events were left teetering after two years of COVID-19 pauses and hard-stops, Breakaway has gone the other way and will add a new event in the San Francisco bay area in October 2022 (along with summer festivals in Kansas City, Columbus and Charlotte, N.C.). Touring Behind ‘So Far So Good’: The Chainsmokers (Courtesy Photo)

Breakaway’s largest booking to date, NYC’s electronic music act The Chainsmokers, will arrive in Grand Rapids in support of the duo’s newest record, “So Far So Good,” anchored by their chart-topping hits, “Closer” and “Something Just Like This.”

Headlining Friday night’s lineup, Alex Pall and Drew Taggart’s vocal-heavy writing style are certain to resonate with a seasoned crowd that Grand Rapids tends to bring forth: When I saw them perform at their Las Vegas residency at XS Nightclub, I witnessed their ability to whip the crowd into an almost unprecedented frenzy during an anthemic journey of their hits.

France’s DJ Snake, best known for his arena anthem, “Turn Down for What,” will certainly love West Michigan, especially with the diversity of his trap and bass house style offerings. While personally I have never been a huge fan of acts that are anchored by one hit, I’m excited to see how he leads up to his finale. (No, I’m not actually suggesting he is a one-hit artist: A few years back, I saw DJ Snake at Detroit’s seminal Movement Electronic Music Festival, and when the chorus of “Turn Down for What dropped it was absolute pandemonium — almost on par with something you might see at a Metallica concert.)

Other performances to watch? L.A’s Two Friends and Miami’s Sidepiece on Friday night, along with Jai Wolf on Saturday night.

Two Friends quick-mix mash-up style encompassing a multitude of genres is almost unexplainable. “They’re like Girl Talk on crack” is the way a good DJ friend recently described them… Meanwhile, Sidepiece’s dance-floor smash with Diplo called “On My Mind” has always been a top pick for me, and they’re coming off of a massive performance at Lollapalooza.

Jai Wolf’s approach will work quite nicely in Grand Rapids as West Michigan’s scene is heavily influenced by the likes of ODESZA and Pretty Lights. Jai’s track, “Better Apart,” is one of my favorites, enhanced by Dresage’s angelic vocals.

No question the main stage gets the starring role at Breakaway, as the natural setting allows fans to sit on the hill and experience the action, offering a very Red Rocks Amphitheatre feel about it.

However, it’s important to check out another huge endeavor at the top of the hill, with Breakaway’s Silent Disco featuring an impressive list of 50-plus West Michigan DJs who will perform over the weekend. It’s one of my favorite hangouts over Breakaway weekend, because you don’t often see this many artists from our local DJ community working in unison for the betterment of our scene.

A professional tip of the hat to Prime Social Group and MI Entertainment Group as they have made strides each year to include more West Michigan businesses and vendors as part of the event.

One of my favorite additions: Centurion Security Solutions to help facilitate the safety of their crowd. We live in a different world than we did even a handful of years ago, and a few parents have already reached out about the perception of safety at an event like this. Centurion has done some great work at massive events such as Electric Forest, Lost Lands and even MSU Football games, of all things, so it’s nice to see their West Michigan-based team watching over one of our signature events. Some housekeeping stuff to consider: The Belknap Park area is starting to show some “neighbor fatigue” for lack of better words, as the neighborhood itself isn’t really designed for the automobile and foot traffic Breakaway tends to bring about.

The best option is to park a few blocks west in the Monroe North area, as it is a short and safe walk to Belknap Park. At the risk of sounding like one of those pesky PSA efforts, if you want events like Breakaway to continue, make sure you’re respectful to the surrounding area by not littering and the like. Parents, if you’re thinking of dropping off your kids and returning for a pickup later, might I suggest the Embassy Suites or Canal Park on Monroe Avenue. There are plenty of people walking this same path with local establishments available to hang out at so you can have a date night while the kids are off at the show.

The bottom line: It always helps to remember to be a good steward of your city as we aren’t afforded opportunities like Breakaway very often in Grand Rapids.

Small gestures like picking up trash, helping strangers find their way and thanking people like the Grand Rapids Police Department and Fire Department for their respective efforts goes a long way in establishing the long-term success of a festival like this.