With Full Cord playing a pre-Christmas show at SpeakEZ Lounge tonight, Local Spins revisits its in-studio visit and interview with the West Michigan band that recently released a new EP. 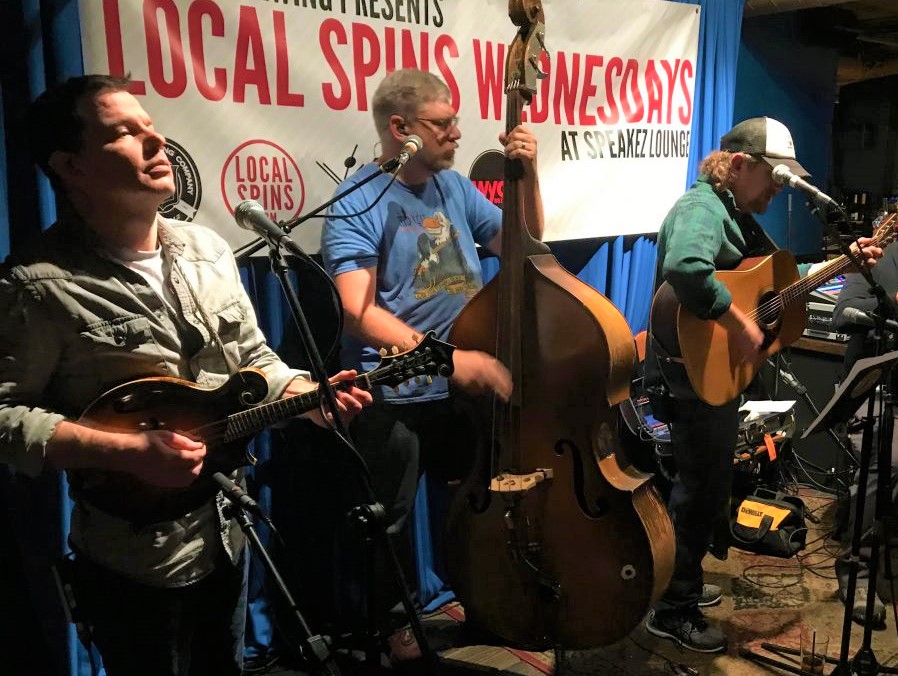 Getting Lost in a Vamp: Full Cord on stage at SpeakEZ Lounge. (Photo/Local Spins)

As guitarist Eric Langejans puts it, Full Cord started 12 years ago as “a total fluke.”

He just happened to camp right next to upright bassist Todd Kirchner at the Charlotte Bluegrass Festival and, well, the rest is history.

The two musicians hit it off and eventually added other members to the fold to create a fun, head-turning bluegrass outfit that recently released its third studio recording, the follow-up to 2018’s “Chop,” with tracks laid down at Grand Haven’s Third Coast Recording on Memorial Day. 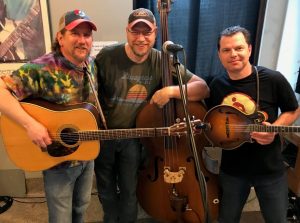 The current lineup – Langejans, Kirchner, mandolinist Brian Oberlin and fiddler Grant Flick (with banjo player Luke Gitchel filling in when needed) – plays the Local Spins Wednesdays series at SpeakEZ Lounge at 8 p.m. Wednesday (Dec. 18) after a busy year of performances across the state — from festivals to watering holes.

“Every member of this band was born into bluegrass and has a very deep understanding of the etiquette and musical skill behind a traditional jam and how to get lost in a vamp that shows off our skill,” said Kirchner, noting that band members have all studied other genres.

“We appreciate being able to be super consistent and swing between old school and newgrass in a way that doesn’t seem contrived. We are all at a level where we push each other to follow along and learn and appreciate where a jam is going … and are able to bring influences from jazz, Italian and classical sounds into our show.”

They also unfurl lots of original material, something they showcased during a spring edition of Local Spins on WYCE, when Langejans, Kirchner and Oberlin delivered on-air renditions of “Gainesville Rain” and “Boneyard Grass.” Watch the video for “Gainesville Rain” here, with the full radio show podcast below.

Oberlin, a member of several other bands, including Grasshoppah and The Journeymen, joined Full Cord last summer after moving back to West Michigan from Oregon.

“I went out to the picking party at Todd’s house in Grand Haven,” he recalled. “I said, ‘Boy, these guys are fun.’ We talked about getting together and here we are.”

This summer, the group released its “Choreomania” EP, which Local Spins described in its review as boasting “an upbeat flair honed by that special camaraderie that comes from guys who love to play together” with tracks that “soar from one ear-pleasing gem to another.” 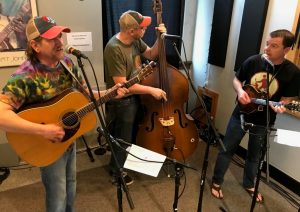 On the Air: Full Cord performing as a trio at WYCE. (Photo/Local Spins)

It’s the sort of vibe that extends to Full Cord’s live shows.

“We have a great presence on stage with banter that is appreciated by the audience and relatable to all listeners,” Kirchner said.

“We hear from many fans that we are one of the only bands that will stick around a festival and pick late into the night and truly just enjoy being around and making music for fans off stage as much as on stage.

“There is a magic in making that kind of connection with 200 people around a campfire or lantern.”