Local Spins asked West Michigan musicians what impact The Fab Four had on their music and what might have happened if the boys from Liverpool had never taken the globe by storm. Post your own comments about The Beatles and you could win a gift. 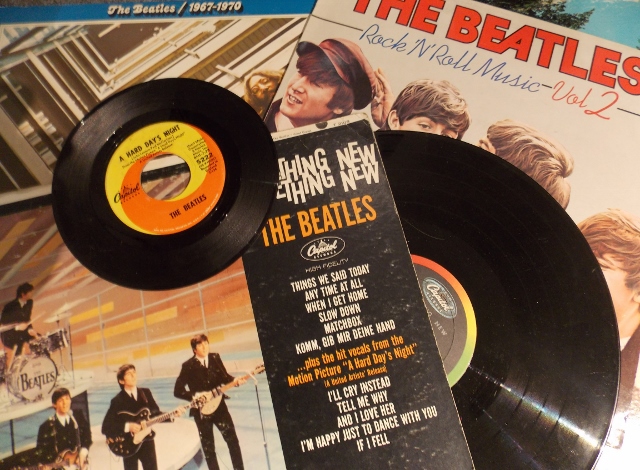 Beatlemania in the United States officially arrived 50 years ago today,

Imagine if John Lennon and Paul McCartney had never met, if The Beatles had never invaded America, if the Fab Four had never rocked the music world.

Shocking to even consider, eh?

Chances are the pop music landscape would be unrecognizable and all those personal stories of musical inspiration would have taken a much different turn.

Luckily, today marks the 50th anniversary of The Beatles’ groundbreaking appearance on “The Ed Sullivan Show,” part of their milestone, fan-igniting, inaugural trip to the States. 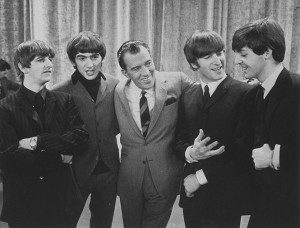 The Beatles with Ed Sullivan.

In my case, The Beatles’ arrival marked the sole reason that rock ’n’ roll shook me to the core and held me spellbound as a kid, cementing music as a focus of my life from that point on, whether it was buying a 45-rpm record of “A Hard Day’s Night” or marveling at the ceaseless inventiveness of each succeeding Beatles album.

Amid all of the hoopla over this celebration of a half-century of rock ’n’ roll brilliance and chaos – including a CBS special at 8 tonight, “The Beatles: The Night That Changed America – A Grammy Salute,” featuring McCartney and Ring Starr – Local Spins asked some West Michigan musicians to reflect on the impact the band had on their music.

And for fun, these artists – some of whom weren’t even born when The Beatles unleashed their historic TV performance – were asked to consider the bleak prospect of roaming “Across the Universe” without The Beatles by completing the sentence “If The Beatles never existed …” It’s sort of like Local Spins’ version of “It’s a Wonderful Life.”

And Local Spins wants to hear how readers finish that sentence, too. So, post your sentence in a comment at the bottom of the story below “Leave a Reply” by Wednesday and Local Spins will choose one lucky winner at random to receive a $20 gift card to Rockford Brewing and a choice of two tickets to an upcoming show at the Tip Top Deluxe Bar & Grill.

Now, check out the comments from some West Michigan musicians.

“If The Beatles never existed … 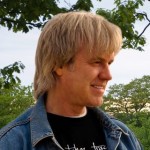 … the world would be an entirely different place. It’s hard to imagine what my life would be like if they hadn’t been here. If The Beatles never existed, I wouldn’t be a musician, I wouldn’t play guitar or sing, and I probably wouldn’t have long hair.”
– Steve Damstra (The Trace)
Favorite Album: “Revolver”
Beatles’ Impact: “They taught us we didn’t have to follow the rules, we could think outside the box … from the music, to clothing, haircuts, religion, politics, even glasses, they changed it all. They had a sound like nothing we had ever heard before, frankly, I wasn’t even into music until ‘The Ed Sullivan Show’ appearance. It was kind of like they freed our generation to be ourselves. They had everything to do with my development as a musician.” 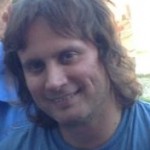 … we would never have to worry about a measuring stick for bands.”
– Tommy Schichtel (The Concussions, The B-Sides, The Fuzzrites, Goon Lagoon Studios)
Favorite Song: “Dear Prudence,” “You Know My Name (Look Up the Number)”
Beatles’ Impact: “Pure perfection without being perfect. It’s like they always had a sense of humor, too. Like they weren’t thinking or even trying that hard. That’s something I always think about when writing or recording. I have friends that seen them on The Ed Sullivan show and say it changed their lives. They knew right then and there they wanted to be a musician, play in a band, write songs. … I’m always amazed at how a band could write ‘She Loves You’ and then four years later write ‘Helter Skelter.’ To change so much year to year as an entire band without sounding pretentious. Unbelievable, really.” 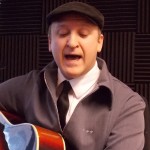 … the history of rock ’n’ roll would be very different. They were such a new and massive phenomenon that their influence is felt to this day. Many of the rock stars of the ’70s on will say how their paths were defined when they saw The Beatles on ‘The Ed Sullivan Show.’ ”
– Morgan May Moallemian (The JetBeats)
Favorite Album: “Live at the BBC” (Songs: “Please, Please Me,” “Nowhere Man,” “Rain,” “Something”
Beatles’ Impact: “The Beatles popularized the very notion of a ‘band’ as a self-contained musical act. In the early rock ‘n’ roll era, artists were centered around individuals (Elvis, Buddy Holly & The Crickets, Chuck Berry, Bill Haley & The Comets). With The Beatles’ massive breakout, the era of ‘bands’ had begun in earnest. They weren’t the first band, but they set the standard for all bands moving forward from 1963 and on.” 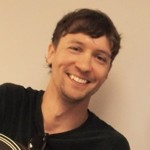 … the world would be a different place. They’re to music what Abraham Lincoln is to politics.”
– Joey Dornbos (The Bangups)
Favorite Song: “I Saw Her Standing There”
Beatles’ Impact: ” I love their first few records, especially ‘A Hard Day’s Night.’ The songs and sound of those early records captures the fun, exciting energy that rock ‘n’ roll should have.” 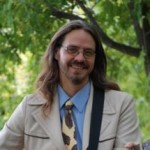 … the world would not know who Yoko Ono is.”
– Nicholas James Thomasma (Singer-Songwriter)
Favorite Album: Tie between “Sgt. Pepper’s Lonely Hearts Club Band” and “Abbey Road”
Beatles’ Impact: “I remember listening to ‘Sgt. Pepper’ for the first time and thinking, ‘What am I doing with my life?’ I’m pretty sure Brian Wilson of the Beach Boys said the exact same thing before he made ‘Pet Sounds.’ Maybe I need to listen to ‘Sgt. Pepper’ again.” 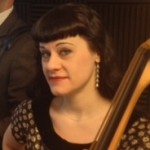 … I suppose the general public would not know what a Hofner bass is, ha-ha.”
– Delilah DeWylde (Delilah DeWylde & The Lost Boys, The Veloras)
Favorite Album: Tie between “Sgt. Pepper’s Lonely Hearts Club Band” and “The White Album”
Beatles’ Impact: “I love the Beatles. Grew up listening to them on my Dad’s vinyl collection. I think one major contribution was putting band songwriting in the forefront. Also, making the Buddy Holly ‘two guitars, bass, drums’ set-up a standard. They just had that magical combo of charm, good looks and talent. Interesting to me also is that each of them on their own had the fortitude of being a ‘front guy,’ which is also rare all in one band.” 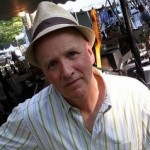 … I don’t believe we would have had the wealth of great rock and pop music by artists taking control of their art, because the Beatles showed that it was possible. You can trace so much of music and pop culture back to them. And imagine the world being denied the extraordinary beauty of “Yesterday,” “In My Life” “Something.” I can’t.”
– Jack Leaver (Solo Artist, The Dushanes, American Heartbreakers)
Favorite Album: “Rubber Soul”
Beatles’ Impact: “Inspired heavily by Buddy Holly & the Crickets, The Beatles were a self-contained band, writing their own songs and playing the instruments on their records, something relatively new in the music business. They inspired countless bands to form and find success with the formula. I don’t think the impact of those Sullivan appearances (especially the first one) on a generation of young people can be overstated: Overnight, electric guitar sales skyrocketed, and every kid wanted to start a band, including myself, and I was only 6 years old.” 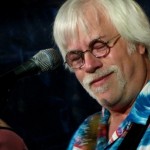 … the music we listened to then and now would be completely different. In fact, the role of music in society would never have reached the prominence it now enjoys. Unless you lived through the period, it’s almost impossible to describe the impact they had.”
– Mark Swanson (13th Hour, Mark Swanson Guitars)
Favorite Album: “Magical Mystery Tour” (Favorite Song: “I Am the Walrus”)
Beatles’ Impact: “I watched them play ‘Ed Sullivan’ as a boy and it captivated me and made me feel like it was possible for any boy to grow up and get a guitar and do that. I was wrong, but I am still trying.” 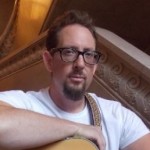 … there would not have been ‘Album-Oriented Rock’ dominating the charts for 20 years (and) perhaps it would have taken longer for music films, videos, merchandising and other elements to develop as fast as they did.”
– John Sanger (Singer-Songwriter)
Favorite Album: “Revolver” (Favorite Song: “Tomorrow Never Knows”)
Beatles’ Impact: “I love the Beatles for their collaborative success with George Martin and the foresight of Brian Epstien to make it happen. The more I learn & the more success I have in music the more I realize it was a perfect situation for The Beatles. … When you start with such amazing personalities and they all have the creativity and drive/ability to take the direction of someone who is clearly more classically knowledgeable it really creates amazing results. Throw that in with the culture and the times, wow … once in a lifetime.” 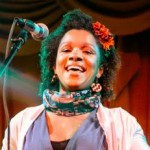 … memories of dancing in the kitchen with my mom as a little girl and road trips with my husband would be unfulfilled.”
– Molly Bouswma-Schultz (Singer)
Favorite Album: “Abbey Road”
Beatles’ Impact: “Creating a body of work as a collective that combined endless styles and influences while also being completely innovative and original.What is most extraordinary about The Beatles’ was their ability to sing honestly about love and society as the times changed (and) so did their sound evolve, organically.” 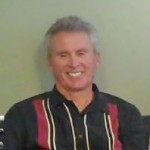 … we would be deprived of 200 amazing songs and all of those Beatles-inspired bands.”
– Dave Marsh (Lazy Blue Tunas)
Favorite Album: “Abbey Road” (Song, “Eight Days a Week”)
Beatles’ Impact: “They changed the direction of pop music by owning their art, writing their own songs and playing their instruments. They inspired thousands of lonely guys to buy guitars, form bands and get girlfriends. Including me.”

Leave your own comments about The Beatles in the space below “Leave a Reply” and you’ll be entered into a drawing for a $20 Rockford Brewing gift card and two tickets to an upcoming Tip Top Deluxe show. Now, relive that “Ed Sullivan” phenomenon …