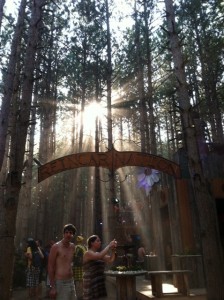 Everything is different in the dark. Way different.

In daylight, Electric Forest sweats with a sun-splashed milieu that sort of celebrates Michigan’s great outdoors – concertgoers gyrating and hula-hoopers hooping to the progressive bluegrass/jazz beats of The String Cheese Incident and the hip-hop electronica of Break Science and Chali 2na.

But things change after the sun sets: Electric Forest electrifies.

The electronic dance music DJs turn up the volume, with their heavy, throbbing beats rattling tents and trees, the stages fire up their psychedelic lighting and lasers, and Sherwood Forest becomes, well, a Fellini-like mystical playground resembling nothing else on this planet.

Spinning LED hoops and balls and sticks and balloons and, yes, people, flash across the landscape – a landscape littered with a fair number of bodies tuckered out by too much alcohol or other intoxicants, or maybe, just too much whirling and twirling. 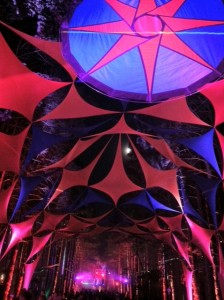 Sherwood Forest by night, with the moon peeking through.

Late Friday night, Quixotic, an ensemble fusing artists, dancers, musicians and electronica strains, set up in the midst of the always-mesmerizing, Sherwood Forest to create a blacklight-fueled spectacle for the ears and eyes deep in the woods.

Unexpected things happen at night: a New Orleans-style marching band with singers trumpets and tubas its way from one stage to another, concertgoers dressed as wolves, centipedes, astronauts, storm troopers, court jesters and illuminated aliens frolic from stage to stage.

And there are more of these resplendently attired festival-goers: This year’s Electric Forest at the Double JJ Resort in Rothbury clearly has attracted a much larger crowd than last year’s event; one performer said he was told they topped 20,000 people by Thursday and certainly more arrived at the sprawling site off U.S. 131 on Friday, when the String Cheese Incident, Thievery Corporation and other headliners staged their first shows. (See the rest of the weekend schedule here, and there are Saturday-Sunday passes available, which might be worth it for the people-watching alone.)

If you’ve never been to either the Rothbury or Electric Forest festivals, here’s a video to give you a taste of what you’ve missed. And you’ll probably be left asking: How can these folks possibly keep this up for four straight days?