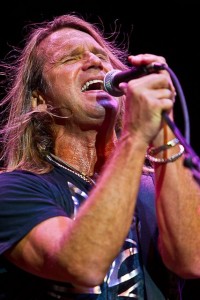 It’s magic, and that’s what keeps you coming back.

At 61, Foghat lead singer and East Grand Rapids High School grad Charlie Huhn may be as happy playing the rock ‘n’ roll frontman role as he ever has … which is saying quite a lot, considering his storied past.

Huhn, who’s also an alumnus of Grand Rapids Community College and Michigan State University, started by singing and playing in bands such as Cirrus (rubbing elbows with the likes of Vic Amato) and Tanglewood in the Grand Rapids area.

He eventually landed a dream gig with the Motor City Madman himself, Ted Nugent, in the late 1970s, during a period when the guitarist soared to international prominence. Later, he worked with Irish guitarist Gary Moore and the bands Victory and Humble Pie Featuring Jerry Shirey.

For the past 12 years, he’s served as singer and rhythm guitarist for Foghat, replacing “Lonesome” Dave Peverett (who died of cancer in 2000). He’s helped founding member Roger Earl and fellow bandmates Bryan Bassett and Craig MacGregor turn the blues-hued classic rock group into a touring mainstay once again behind hits such as “Slow Ride,” “Fool for the City” and “I Just Want to Make Love to You.”

Huhn, who not long ago moved to Orlando, Fla., from the Detroit area, chatted with Spins on Music recently about his career, his love of Michigan and his rock ‘n’ roll roots.

Q: So tell me how things are faring with Foghat.
A: The band is doing great. Last year, we had our best year ever. … We did 75 gigs last year and that’s real good for us. Half of our year is booked in February, everybody is real directed and we’ve learned how to get along perfectly. We’re all just thankful to still be out there playing.

Q: I want to take you back to your early days in Grand Rapids. What’s your fondest memory of those early years and how did you first get linked up with Ted Nugent?
A: Fred DeVries (longtime friend, owner of SoundChaser Audio and past sound tech for Victory) and I were just talking about this and thinking about all the bands. There was Tanglewood, a bar band, that Buddy Chrysler and I are threatening to get back together again just to do some side stuff. I always loved his drumming. I love coming back to Michigan. We always have a lot of grins about the old days.

(Grand Haven studio owner and sound engineer) Bill Chrysler was my first soundman. We go back to 1973. I was taking a break from college and … this is how I ended up in Tanglewood. Everybody was focused. I wanted to focus on this as a career. Then came the Nugent audition and I haven’t had to look back since.

It was right after the “Double Live Gonzo!” album (1978) when Ted was having a falling out with Derek (St. James). A hunting buddy got Ted to put me on the list of auditionees. This friend of his seemed to think I was a shoo-in. It was a great experience. I had to do about seven songs. It was really fun because my adrenaline was rushing. I was singing my brains out and it worked.

Q: Do you still keep in contact with Ted?
A: We played a show together in Minnesota. We talked for a good half-hour before the show. I was really honored. We have similar personalities and a sense of humor.

Q: So what kind of sets are you playing with Foghat now and what are your audiences like?
A: The band is really strong musicianship-wise and all of us put out 120 percent every time. Bryan (Bassett, who played in Wild Cherry in the ‘70s) is flawless on slide and lead guitar. Hearing him play just elevated me to another level. He has that fundamental R&B style. He’s just so solid, it’s like, whoa man, it makes it so easy to go out there and take it to another level and experiment around and be exactly perfect and entertaining. It’s just an honor playing with these guys.

This band developed a strong following in the ‘70s and that following is still loyal to this day. We’ll get 25,000 to 35,000 people at a show. It’s the real deal. It just shows that the draw is still there. You just have to make it advantageous to the fans. 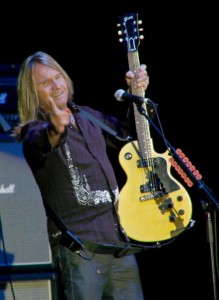 Q: At your age, what keeps you on the road and entertaining folks after all these years?
A: I’m 61. I have to stay in shape, so I work out every day. That’s an important thing. The actual music side of it, the voice has held out really well and has even gotten stronger. Sometimes people don’t take care of themselves and that affects your voice and performance. You have to stay healthy and do the right thing.

The hardest part of it is the travel. We’ll be in Portland, Maine, one day and the next we’ll be in Portland, Ore. In the summer, we’ll have seven shows in a row and we’re just throwing darts at a calendar. We’re not in a position to put a routed tour together. That gets a little extreme at times in the summer when you’re doing fairs and festivals.

You get your nap when you can and relax and stay focused. … Since we fly to every show, we get a lot of experience related to that form of transportation. Anything and everything that can go wrong, will. We’ve had gate agents not letting us on the plane, delayed flights. We’ve had to adjust how we travel. But we’ve never missed a show and that’s something that a lot of bands can’t say. Guitars don’t show up sometimes; it’s really an adventure.

(But) I would not be happy if I didn’t make that crowd smile, and make them sing along and cheer. And we get that every night. It’s magic, and that’s what keeps you coming back.

Q: And you guys are still putting out albums.
A: A couple years ago we put out a blues album called “Last Train Home” and we wrote two new blues songs on it. Eddie Kirkland (electric blues guitarist who died in 2011) sat in with us on a couple of tracks and we did a bunch of covers of songs that we all liked. We just released a double-album LP in blue vinyl of “Last Train Home” and it’s perfect. We released this double-vinyl on the 12th anniversary of Lonesome Dave’s passing. The blues thing was really fun because everybody stepped it up a notch and the CD’s getting really good reviews.

(The 2003 album “Family Joules”) re-established the new lineup of the band. That was kind of our point where we wanted to touch base with our blues roots again because that’s where it all started with Foghat and with all of us.

Q: You’ve shown great versatility and endurance as a singer over the years, from hard rock to blues. To what do you attribute that?
A: Learning as you go. When I was doing the hard-edged hard rock and metal stuff in the ‘80s, I noticed that it really taxed my voice with over-the-top falsettos and screaming. My voice couldn’t really handle that night after night. When it comes to regular singing, that’s so natural if you learn how to control it.
Our sound guy once told me, ‘You’re the only singer I’ve heard in 40 years that get stronger every night.’

Q: What’s the biggest regret you’ve had in your career?
A: The biggest drawback to my career is that I didn’t write more. I was kind of worried about what I’d put out, I was critical (of my music). It’s gotta be catchy. It’s not as easy as you think. It’s something I didn’t do. When I was with Ted, I might have to show him the riffs. It was fun sharing with him. And collaborating with guys like Gary Moore and writing for Victory, lyrics and melodies, getting that writing experience, gave me more confidence. But early on, I just wish I had written more.

Q: You’ve moved, but clearly you’re a Michigan guy and seem to really like playing here.
A: Exactly. I just really love Michigan. I grew up here and went to college here. I’m really tied and connected to Michigan and follow Michigan sports. I actually live on the road and my real home is in Michigan. It’s so cool that Michigan sports teams are doing so well. Being back in Grand Rapids brings it all home. Every time I go back there, I drive through ol’ East Grand Rapids.

And I love getting up north in Michigan because that’s like God’s country up there. I have friends in the U.P. and we’re playing all the casinos in Michigan, which is great.