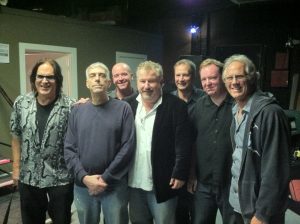 Burleigh Drummond, at right, and Ambrosia recently performed in Grand Rapids to celebrate the 63rd birthday of Aris Hampers, second from left.

The whole thing about Ambrosia is that we play for the song. Even our prog stuff was based around the song; it wasn’t notes for notes’ sake.

In some ways, Ambrosia’s track record as a prog-rock band is like no other in the music business.

By incorporating melodic, catchy pop hooks into a technically demanding musical approach, the California group from the classic rock era racked up five Top 40 hits from July 1975 to August 1980, scoring two No. 3 hits with “How Much I Feel” and “Biggest Part of Me.”

In West Michigan, the band’s early success can be traced to directly to one disc jockey: WLAV-FM’s Aris Hampers, who discovered an unlabeled test pressing of Ambrosia’s first album and started playing tracks regularly on the air in 1975 because he was so captivated by what he heard.

While the band has released only five studio albums – with individual members immersing themselves in other projects over the years (for instance, bassist-singer Joe Puerta was a founding member of Bruce Hornsby & The Range) – the group continues to tour and record, with a long-awaited new album in the works. The core of the band features three original members – Puerta, drummer Burleigh Drummond and keyboard player Christopher North – along with guitarist Doug Jackson and singer/multi-instrumentalist Rick Cowling.

Although its mainstream popularity waned long ago, the group’s fan base remains remarkably devoted, with many embracing Ambrosia’s prog-rock prowess and others getting nostalgic for its pop hits. An outdoor Grand Rapids show in 2010 drew thousands of fans downtown and the band recently returned to Grand Rapids for Hampers’ 63rd birthday bash, drawing hundreds of longtime fans to The Intersection for a performance that combined their hits, deeper tracks and some new material. (View video snippets of that show below.)

I recently chatted with Drummond, a successful producer in his own right who’s part of the pop/prog/rock/blues band Tin Drum with his wife, Mary Harris. He also tours and performs regularly with blues-roots music artist Mighty Mo Rodgers, and produced Rodgers’ latest album, “Cadillac Jack.”

Q: So was it an honor to come back to Grand Rapids to play Aris Hampers’ “birthday bash” because he was such an early supporter of Ambrosia?
A: Absolutely. … Without people like him, well, really the best things in life that get attention or are savored by people, it’s still word of mouth. That’s what people believe the most. That kind of promotion or influence is still even today invaluable. It’s the truest kind, it’s coming from the heart. He’s a nice guy.
We’ll do some things we haven’t done live in a while. We’ll lean a little more toward the proggy side because we’ve worked up three or four tunes we haven’t done regularly and definitely not on the East Coast very much. We’re excited about that. We keep having to throw in some of the reworked old stuff and throw in a couple of new tunes for our sake.

Q: You’ve clearly got a lot of fans here in West Michigan. The outdoor show in 2010 drew such a huge crowd downtown.
A: It was a good one. I mean, every gig we do I treasure now. I think we appreciate it and enjoy it now more than we ever have because you see it in perspective, and it’s an honor to go out and play. 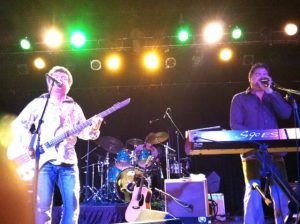 Q: When I interviewed you two years ago, you guys had just started work on a new studio album. What’s the status of that project?
A: We’re in the middle of tracking now. In fact, this (Grand Rapids show) is one of our last dates before we take more of a break to really concentrate on the recording side of it. It’s hard for us to be doing weekend dates and trying to record at the same time. Everybody has their own studio and we’re producing 10 different people at the same time. We have to carve out some time to dedicate to Ambrosia, which is one of the main things we want to do. We’re really excited about it. There’s probably about six songs written and hundreds of bits and pieces that need to be flushed out. We’re trying to leave some room for spontaneous combustion to happen. We want to do some writing in the studio when we work off of grooves – kind of like the old days when we just used to jam and take a piece here and a piece there.

Q: What’s the stylistic nature of the new recording?
A: It will have a sampling of everything, from proggy to basic, good old songwriting. The whole thing about Ambrosia is that we play for the song. Even our prog stuff was based around the song; it wasn’t notes for notes’ sake. We’re pretty much a song-, melody-based band even in our wildest, proggy things. We always had a song with a melody and story, so those are kind of conditional for us.

Q: How many dates does Ambrosia play every year?
A: We did 60 last year, probably less this year because we want to concentrate on recording. Next year, we’ll do more. We’re trying to refine our show a little more, too, moving into performing arts centers and trucking in our own lighting. We still feel like we haven’t taken the full Ambrosia show on the road, doing “Danse With Me George” (a nearly eight-minute tune from 1976’s “Somewhere I’ve Never Travelled”) and the elaborate pieces … and doing orchestral dates. We really want to move into that place where we feel like we put on our ultimate show.

Q: What other projects are you involved with these days?
A: I just finished producing Mighty Mo Rodgers, a blues/Americana artist. He’s the real deal. I’ve never played for such a profound artist. I tour Europe twice a year with him and finally got to produce one of his albums. The guy’s just profound. He’s taught me more about history and why so many music forms have come into existence and how they came about. He could do a blues festival and teach a master’s class at the university the same day.
I’m also in a band with my wife called Tin Drum. We’ve put out three CDs. And I’m working on a million bits and pieces. For me, the problem is that I have a drum set up. I’m supposed to be writing and I see the drum set, and once I see the drum set, it’s all over. I used to have it set up in my bedroom growing up and I’d be lying in bed thinking about the drums. It’s just a lifelong fixation. It’s an obsession, fixation, frustration, joy. I look at a drum set and I start sweating. 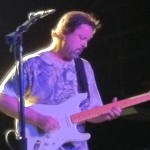 Q: Speaking of sweating, you’ve said before that Ambrosia’s music may be catchy and have a pop flavor, but it’s also challenging to perform.
A: Three of us in the group have been together 42 years and you still can’t phone it in. You can’t be daydreaming, or forget it. The music after all these years is still challenging enough that you have to be there. I guess that speaks a lot about the music. It’s still challenging. There are still some songs that I’m still trying to find a better way to play it or the best way to play it or to improve how to play it. It’s this never-ending thing. I’m never 100-percent satisfied.

Q: It seems like Ambrosia’s music has an enduring quality, even though the band has released so few albums over the years.
A: I think we’re just starting a whole new chapter of Ambrosia, to be honest. There’s some legal stuff we had to get through and we had to try to find the right agent. We’re just coming to the end of all that. It’s opening up to a really nice period for Ambrosia.