Three new releases by Grand Rapids artists made a splash on the November chart at WYCE, with Heerspink’s jazz-fueled “Monsters’ Impromptu” swapping places with Billy Strings at the top. Edison Kitt described it as an “awesome” surprise.

All three West Michigan artists were reacting to news that their latest albums had landed on the Local Spins Hot Top 5 Chart for November, representing local and regional releases that received the most airplay at Grand Rapids’ WYCE (88.1 FM). Their debuts on the chart were bookended by repeat entries from the previous month: Lee Heerspink’s jazz-fueled “Monsters’ Impromptu,” which jumped from No. 5 in October to No. 1 in November, and Billy Strings’ progressive bluegrass-driven “Renewal,” which made the opposite move, dropping from No. 1 to No. 5.

That Benzing, Lazy Genius and Kitt all entered the chart ahead of Michigan-bred, perennial fave Billy Strings – whose latest album soared to No. 1 on the Billboard bluegrass albums chart and later generated two Grammy Award nominations – makes this a particularly impressive feat.

“I am filled with gratitude, excitement and encouragement knowing that people are resonating with my music,” said Benzing, a member of the Benzing-Graves Collective who released his first, country-hued solo album, “Steady Your Nerves,” in September. It was No. 2 on the November chart.

“I’m humbled knowing that out of all the incredible artists that the WYCE DJs have access to, they have been choosing to play my songs. It feels like a warm welcome into the Grand Rapids music scene and it really helps light the fire to keep pushing forward to get more material out.”

Benzing plays a solo show (backed by a band) at Tip Top Deluxe Bar & Grill on Dec. 10, opening for The Claudettes.

INVESTING ‘A LOT OF LOVE, TIME AND ENERGY’ INTO THEIR MUSIC

For Wieland and psych-rock’s Lazy Genius, “Procession” – at No. 3 on the chart – represents a shift toward creating music that’s “bigger, faster, slower, louder, more dynamic, kind of all over the place,” reflecting production that sounds like “a ’60s or ’70s rock ‘n’ roll record.”

“It means a lot to us that people are responding positively to the record as we put a lot of love, time and energy into it. It’s a blast to hear ourselves on the radio,” he conceded.

“The talent and diversity thereof in West Michigan has expanded a ton since we started playing, so to be recognized in this giant pool of great musicians is nice.” 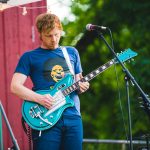 Lazy Genius is set to play the Grand Rapids Public Museum’s “Concert Under the Stars” series in the Chaffee Planetarium on March 10 and 11.

Singer-songwriter Kitt expressed similar sentiments about the No. 4 album on the Hot Top 5, “Whiskey Ramblings.”

“I really can’t say enough about how much I appreciate the support of WYCE, its programmers and DJs, you and your team at Local Spins and the West Michigan community,” he said. “I’m really proud of the album and am so grateful it’s getting out there.”

Edison Kitt & The Strangers play Mulligan’s Pub on Jan. 8 with the Epitones.

Heerspink, whose star-studded jazz debut album jumped to No. 1 on the chart, had previously called it smile-inducing to know that folks were embracing the “fun and engaging” album that also features Jim Alfredson, Randy Marsh, Dutcher Snedeker and Caleb Elzinga. Heerspink plays WYCE’s “GR Live” at noon Dec. 16 at Listening Room in downtown Grand Rapids.

Billy Strings, meanwhile, continues to sell out shows on his national tour – including three “homecoming” concerts at GLC Live at 20 Monroe Dec. 30-Jan. 1.