The Motor City rockers have been taking their blue-collar mentality on the road, pumping up fans in Grand Rapids and beyond with snarling guitars and passionate vocals. 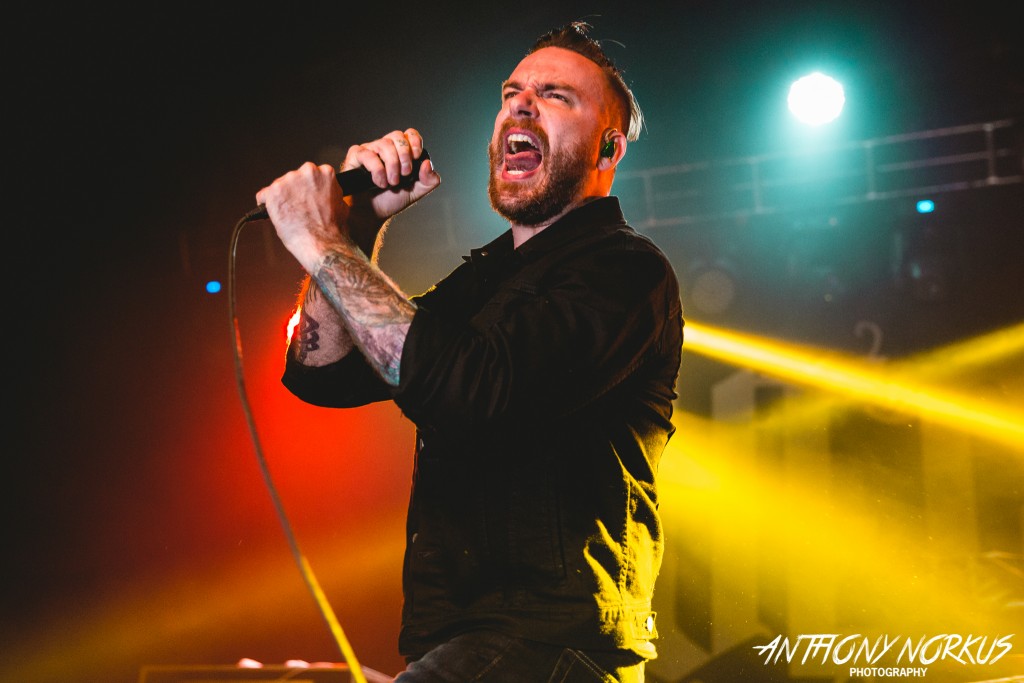 Taking it to the Next Level: Chad Nicefield and Wilson did just that at The Intersection in Grand Rapids last weekend. (Photo/Anthony Norkus)

The men of Wilson proudly call Detroit home, and they share plenty of character traits with the Motor City.

With a little bit of a rough exterior, these grizzled rockers – currently touring behind their latest album, “Right to Rise” – embrace their blue-collar roots and exude a passion for entertaining that leaves audiences enamored. 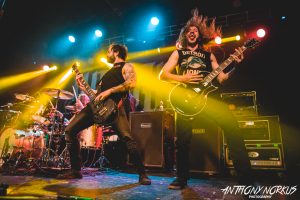 What started with guitarist Jason Spencer and some college friends jamming and playing shows for free beer, quickly saw the hard rock band self-release 2009’s “Standing on the Reel” EP, an album that overflowed with crunchy guitar riffs and a storyline about a zombie apocalypse.

“When Jason started the band in Lansing, it was this fun rock ‘n’ roll project that kind of came together in the last few years by injecting seriousness into it, and some people that really wanted to take it to the next level,” singer Chad Nicefield says of the band’s development.

That’s meant hard work and a commitment to a more consistent touring schedule. “You won’t be an overnight success where ‘that’ dude finds you and signs your band,” notes Spencer.

That also led to lineup changes and new faces coming into the fold, with the band eventually settling on the current lineup of Nicefield, guitarist Kyle Landry, bassist James Lascu and drummer Matt Puhy, with Spencer being the sole original member of the group.

The group’s rousing rock approach — their website address is wilsonpartyanimals.com and they recently released a video for “Give ‘Em Hell” (see below) — hasn’t gone unnoticed.

LAYING DOWN ‘AN ORGANIC, REAL RECORDING’

While the band was wrapping writing for its follow-up EP, producer Steve Evetts emailed the band, stating one of the bands fan’s had tweeted him about Wilson. He said he fell in love with their sound and wanted to have them out to Los Angeles for a recording session.

Walk The Beat: Official Sponsor of The Local Spins Artist Spotlight and Coverage of SXSW 2016

“Steve rules,” Spencer raves in describing the recording of 2013’s full length “Full Blast F—–y.” “The process was perfect. He is all about committing to parts, you know? You play it and create a vibe. Music is losing feeling nowadays and working with Steve really goes to prove that an organic, REAL recording never fails.” 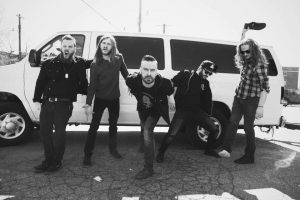 ‘A Bunch of Different Influences’: Wilson

Armed with a new album that accurately captured the band’s frenetic live sound, Wilson hit the road opening for such metal royalty as GWAR and Jason Newsted (formerly bassist for Metallica).

These tours in particular were an educational experience as the guys in the band picked up invaluable wisdom from pioneers they grew up admiring — learning what it means to be in a professionally touring band of that magnitude.

“Those dudes are real awesome. They’re real people who have been doing it for a long time and they’ve handled a lot of weird things as far as the road goes. To have them invite us onto the road … it was overwhelmingly kind,” Nicefield recalls.

With years of hard touring and two albums under Wilson’s belt, the national Razor and Tie label signed the band and sent them down to Atlanta to record with Johnny Andrews. Recording with a producer known for working with radio rock bands seemed to be the best fit to showcase the bands evolving sound.

The resulting “Right to Rise” finds the band playing a more focused version of its music with a greater emphasis on tighter song arrangements, catchy hooks and an accessible vocal delivery, all presented in a way that appeals to fans who learn toward a classic radio rock sound. 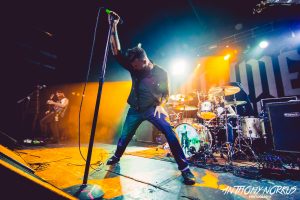 “I’m not gonna say that wasn’t a conscious decision,” Nicefield says. “Because it was something we went into fully knowing that we all have a bunch of different influences, and if we were limiting ourselves to the same type of sound every single time we wrote a song then we wouldn’t be servicing any of the egotistical part of being a musician being able to let your insides out and tell different types of stories.”

Fresh off a European tour supporting Halestorm, the five band members recently took some time off for more writing before heading right back out onto the road.

Wilson’s current tour with We Came As Romans on the “Band VS Food” tour brought the band to Grand Rapids last weekend, when it displayed its Detroit-bred rock for an exuberant bunch of fans at The Intersection.

While opening sets can restrict some bands’ performances, it almost works to Wilson’s advantage: The band bludgeoned The Intersection crowd for 25 minutes of impassioned playing. The snarling guitars matched Nicefield’s vocal bite, with a rhythm section that induced feet tapping from even the most detached of attendees.

The band is bringing that attitude and vigor to the East Coast with stops in New York, Connecticut and Rhode Island on the current tour with We Came As Romans, followed by shows in The Carolinas with Steel Panther. They’ll open for Megadeth at a pair of May shows and return for a Midwest swing with Avatar before playing the sold-out Rock on the Range in Columbus, Ohio.

Check out more photos from the We Came as Romans/Wilson concert in Grand Rapids in this Local Spins gallery.