With re-emergence of the alt-country band, The Dushanes, Leaver is juggling a robust performance schedule while eyeing new band and solo recording projects. (Podcast, video) 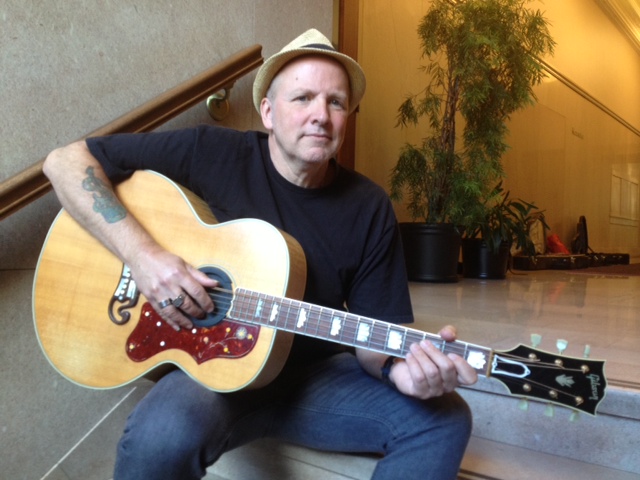 He’s one of music’s Jack of all trades.

“Everything just took its natural course,” explains Leaver, who grew up in Fremont and now splits his time between Grand Haven and Newaygo.

The groundwork for that course was laid early on, with Leaver soaking up the strains of The Beatles, Ricky Nelson, Jimmy Dean, Eddie Arnold, Johnny Cash and Buddy Holly as a boy, picking up a guitar at age 8 and never looking back.

It eventually led him to help form college rock’s The Skyscrapers, roots rock’s Mosey and alt-country’s The Dushanes, spend time in Nashville writing songs with Robert Reynolds of the neotraditional country band The Mavericks, and front cover bands such as Just Jake and the American Heartbreakers Petty tribute. 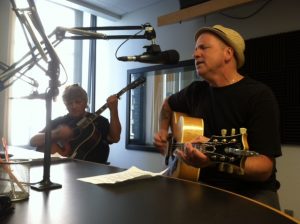 ‘WE JUST WANT TO BE CREATIVE’

Now, even as he continues to perform as a solo artist across the region several nights a week, the singer and in-demand guitarist is re-tracing some of his steps by reconnecting on stage with The Dushanes – Leaver, Mitch Wood, Greg Miller and Todd Truman – with hopes of recording again and re-releasing some of the material the Americana-infused band produced in the late ’80s and early ’90s.

Leaver also is working on a solo project with help from Wood, Miller, Truman, Dave Stanton and other area musicians.

“We just want to be creative,” says Leaver, who admits to having a soft spot for Tom Petty, not to mention having an uncanny ability to impersonate the rocker’s voice. “Tom Petty can write roots-oriented stuff. He could write a country song and it would be real … because it would come from his heart. That’s what I think we’ve always tried to do with our songwriting, especially in The Dushanes. … We’re really enjoying right now being creative together again.”

On Wednesday, Leaver and Wood got creative in the studios of Newstalk 1340 AM (WJRW) for Local Spins Live by performing an acoustic duo rendition of “The Travelin’ Kind,” an “old-school” song written years ago by Leaver with Reynolds in Nashville. (Listen to the show podcast here, and watch a video of the performance below.)

Leaver, a gregarious conversationalist with many a tale to tell, says he’s often told The Dushanes were ahead of their time with their alt-country approach, a movement that’s since caught fire with performers such as Steve Earle, Son Volt, Wilco, Drive-By Truckers, Lucinda Williams and others.

The band’s blend of rock and country may have actually taken seed when the musicians were youngsters, growing up in the ‘60s. “We come from the days when radio would play the Beatles and then Buck Owens,” suggests Wood. “You had it both, it was always there: ‘OK, that was the Kinks and now, here’s Johnny Cash.’ ”

Leaver jokes the band traversed the “street of broken dreams” in the late ’80s and early ’90s, struggling to find venues to play. “I guess it wasn’t our time,” he says. “It was very, very difficult for us at that time. That was one of the reasons why we just got tired and quit playing together and moved on to other things.” 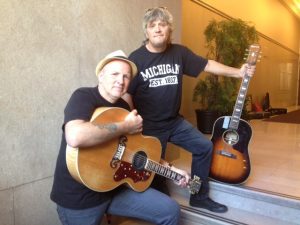 For Leaver, those things have meant stints in a variety of rootsy rock bands as well as a robust solo career playing originals and a hefty catalog of cover songs from Neil Young to David Bowie, not to mention sitting in regularly with Grand Rapids-area outfits led by Nelson, Ralston Bowles, Michael Crittenden and others.

And on Aug. 30, The Dushanes will return to one of their old hangouts from their early years, The Sawmill Saloon in Big Rapids. While “not a full-time thing,” the re-emergence of The Dushanes has sparked renewed enthusiasm among band members for the group’s unique chemistry.

“We appreciate that we’re as tight as we are. We don’t even have to look at other. We can play songs we haven’t played in 25 years, maybe a cover song, and we’re all hitting the same places,” says Leaver. “It’s like a nice pair of jeans that you don’t want ’em to ever wear out.”

For more about Leaver and The Dushanes, visit jackleaver.com, thedushanes.com or the American Heartbreakers’ Facebook page.