The Local Spins Artist Spotlight shines on an in-demand Grand Rapids rock band, a fresh trio with two EPS under its belt and two more albums on the way. They play Founders Thursday night. 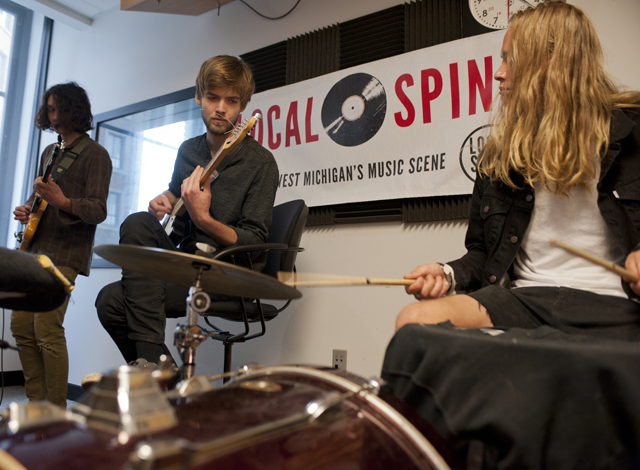 The band members in Grand Rapids’ Heaters have learned to work fast.

Formed only six months ago, the rock trio – which blends elements of garage, surf and psychedelic rock into its fuzz, pop-hued approach – already has released two EPs, recorded a single for REVUE Magazine’s summer music sampler, and will enter Stone House Recording studios later this month to crank out a four-song EP for the new dizzybirds records label in Grand Rapids. 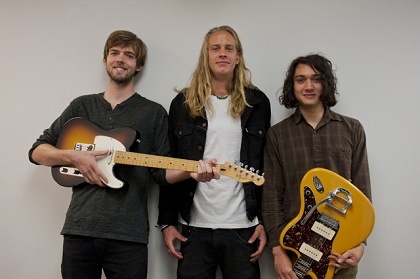 Andrew Tamlyn (bass, guitar, vocals), Nolan Krebs (guitar, bass, vocals) and Josh Korf (drums) also waste precious little time getting ready for a performance: After briefly getting trapped in a radio station elevator on Wednesday, Korf raced to set up his stripped-down kit in two minutes flat so the trio could perform a new song on the air in time for Local Spins Live – a promotional appearance for their ninth concert in about 15 days.

One could say these Heaters take little time to get warmed up, which is certainly true for the band’s growing reputation as an invigorating live act, adding to the regional buzz about the trio.

“We’ve been playing shows pretty much every week between Ann Arbor, Grand Rapids, Chicago and Detroit. We’re also pretty obsessive about recording which we mostly do at home,” Krebs says of laying down tracks in a rudimentary attic “studio” with a single condenser microphone.

That recording method is about to change: Not only will Heaters head into a professional studio, Stone House Recording, for the first time later this month, but they recently were chosen through Converse’s website to get two free days of recording time at Brooklyn, N.Y.’s Rubber Tracks studio. So, they plan to travel to New York in August to lay down tracks for another album and play some shows out East.

On Wednesday, they slipped into a different sort of studio at News Talk 1340 AM (WJRW) to chat about their music and perform a new song on the air as part of Local Spins Live, captured in photos by Local Spins’ Tori Thomas. And because the instrumental surf tune was as yet unnamed, the band gave it an apropos, on-the-spot working title, “Tori’s Elevator Song.”

Listen to the show podcast (in two parts) here and watch a video of the performance below.

Although the band itself is relatively new, the seeds of Heaters actually were planted many years ago when Tamlyn and Krebs met in high school in Midland and “messed around with music a little bit.” After going their separate ways for college, they decided to move to Grand Rapids to pursue music projects together, eventually linking up with Ann Arbor native Korf, who happened to live next door.

TAKING A CRACK AT MUSIC IN GRAND RAPIDS’ COLLABORATIVE SCENE

“We both really wanted to take a crack at music so we moved here because we know there’s lots of places to play here in Grand Rapids,” says Krebs, who marvels at the “strong collaborative nature” of the city’s music scene.

Adds Tamlyn, who has a day job at Notions Marketing: “People are pretty open-minded to everything (in Grand Rapids). There’s a lot of genres going around in Grand Rapids right now.”

As for those genres, the band avoids getting too specific in labeling its own music, which has Tamlyn and Krebs switching off between bass and electric guitar depending on the song.

Tamlyn, who cites garage-rock heroes Question Mark & The Mysterians as an influence, describes Heaters’ approach as “a little jangle rock … just like a rock ’n’ roll band, really.” Krebs – who credits a classic ’60s record by The Ventures for changing his life – points to Heaters’ “surf elements” and reverb-heavy guitar textures. 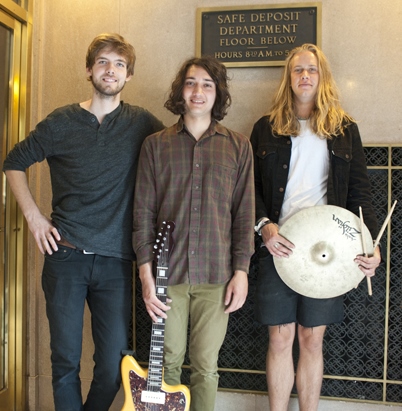 But both also acknowledge getting lumped into the psych-rock or psychedelic rock movement. “We like a lot of the effects and sonic elements of psychedelic rock, so it’s cool,” concedes Krebs, who works for MLive Media Group by day and Heaters by night. “That’s not necessarily how we’d describe it. We really dig jangly, surfy pop songs, with room for abstraction and bizarre effects when possible.”

The band will show off its reverb-drenched sound at Grand Rapids’ Founders Brewing Co. at 9:30 p.m. Thursday, opening for Pistolbrides and Sacred Strays. Admission is free.

After that, the busy band takes some time off for recording, but will be back performing live in July, playing a Detroit show with its pals in Grand Rapids’ Haunted Leather and booking more performances.

“I just bought a van yesterday, so we’re ready to go. All the rust is covered,” says Krebs. “We’re going to play as much as possible. We’ll go wherever.”

For more about the band, visit its Facebook page and listen to more Heaters music at their bandcamp.com site.