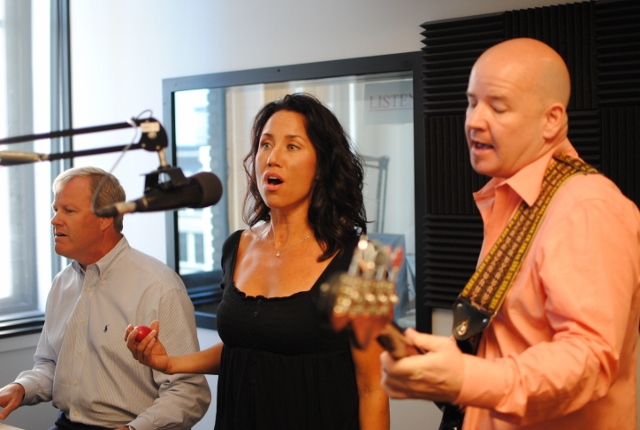 In some ways, Mid-Life Crisis may be the perfect Celebration on the Grand band.

Having established itself over the past decade-plus as one of the Grand Rapids area’s leading classic rock cover bands — with original songs weaved into its sets — the six-member group of friends and musicians has long supported local causes and community events.

“We’re kind of a product of Grand Rapids and this is a big celebration of all things grand and all things Grand Rapids, so we’ve done this show a number of times over the years,” drummer Steve “Doc” Bloom says of Mid-Life Crisis’ upcoming Friday night show at Ah-Nab-Awen Park just prior to Celebration on the Grand’s fireworks display. “We’ve done it on beautiful nights, we’ve done it in the pouring rain, and we’ve done it under the fireworks.”

Mostly, they’ve done it because they’re fervently devoted to making music, something which first brought the founding members of the band together in 2001, playing a free concert on tennis courts in East Grand Rapids for an audience of lawn chair-toting friends and neighbors. 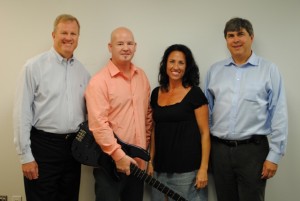 AN “AMAZING OPPORTUNITY” AND “A REAL TREAT”

For Bloom and keyboard player/singer Kevin Paul, that event marked a return to the music scene after a long hiatus in which they raised families and started careers (medicine for Bloom and banking for Paul), quickly realizing that they missed the thrill of being in a band.

“That was really the start of an amazing opportunity to play great music with great friends and blend that in with families and careers,” says Paul. “It’s been a real treat.”

After undergoing various lineup changes over the years, the band — which churns out classic rock favorites ranging from The Eagles to Billy Joel — currently features Bloom, Paul, singer Tara McLaughlin, bassist Tom Brown, guitarist Greg Morris and guitarist/bassist/saxophone player Steve Westphal. On Wednesday, Bloom, Paul, McLaughlin and Brown joined Local Spins Live to chat about their music and perform a stripped-down version of an original song, “Life’s Too Short,” in the studio of News Talk 1340 AM (WJRW).

Listen to a podcast of the show here and watch a video of that performance below. (And come back to Local Spins on Friday for an exclusive video and spotlight on Jake Down & The Midwest Mess.)

Released as a single of sorts last year when the band entered the song in the international ArtPrize competition, “Life’s Too Short” served as a follow-up to Mid-Life Crisis’ second full-length album, 2009’s “It’s Always Something,” recorded at Grand Rapids’ Mackinaw Harvest Studios. The band released its first album of original music, “It’s All Good,” in 2006. 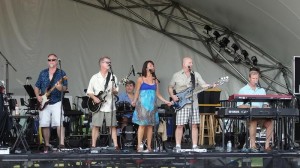 Mid-Life Crisis opening for Kansas in 2012.

“Over the years, we’ve written a lot of songs. I don’t think we made an active effort to make a hybrid band of covers and originals, it just kind of happened over time,” Bloom says. “When you have a bunch of friends who hang out for a long period of time, the creative juices just flow, and it’s been fun putting out the original music.”

They’ve managed that — along with opening for national acts such as Cheap Trick, Kansas and Tommy James & The Shondells — while juggling family responsibilities and day jobs. “It just seems to work,” says Paul, who started playing cello in fourth grade but turned to piano after hearing an Elton John song. (He learned Elton’s “The King Must Die” as his first song on the piano. “It had only one flat in it, so it didn’t look too hard.”)

THE THRILL OF PLAYING LATE-NIGHT JAMS AND BIG COMMUNITY EVENTS

Bloom puts it this way: “The rule of thumb was created 12 years ago by our wives: We get to play out twice a month. We do get together pretty much every week to rehearse or write new music or record.” 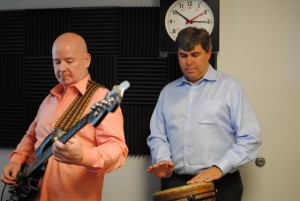 Many of those shows are major community events. In addition to Friday’s Celebration on the Grand appearance at 8:30 p.m. on the Ah-Nab-Awen Park stage (following sets that start at 5:15 p.m. by An Dro, The Outer Vibe and Lazy Blue Tunas), Mid-Life Crisis is performing a special 10-year anniversary celebration of the Forest Hills Fine Arts Center on April 19, 2014, bringing high school and community talent together on the same stage in a “musical cirque du soleil” concert.

Still, Bloom stresses that the band gets as much pleasure out of its private jams and rehearsals.

“We’ve had as much fun just getting together in our warehouse playing late hours in the middle of the night with nobody around,” he says. “So, it’s all about just playing music with friends.”

For more about Mid-Life Crisis and to listen to samples of its music, visit the official website at mlcband.com. For a full schedule of bands playing two stages Friday and Saturday during Celebration on the Grand, go online to celebrationonthegrand.org.