This late February roundup of releases by Michigan artists has something for a myriad of musical tastes: rock, jazz, folk, electronic and pop. Read the reviews, listen to tracks from each album. 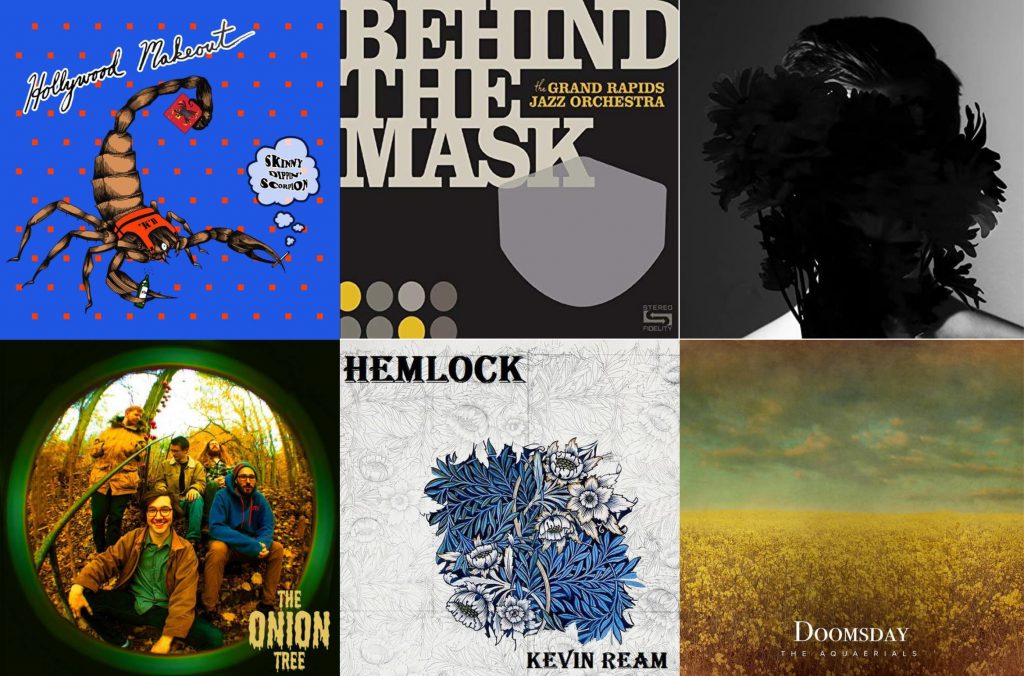 Time to heat up the end of February with another batch of rousing new releases by Michigan artists.

This particular roundup of albums by local and regional acts ranges from garage-rock fervor to spirited jazz to electronic catharsis. 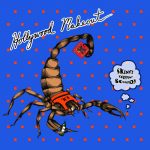 What Stands Out: Grand Rapids-based Hollywood Makeout’s “Skinny Dippin’ Scorpion” feels like the embodiment of “don’t threaten me with a good time” – between its gritty, in-your-face garage sound that’s supercharged with high-octane energy. The album recorded at the all-analog Goon Lagoon has all of the charm of a garage band thrasher with a refinement that allows intricate flourishes to shine. Singer and guitarist Erin Lenau demands attention with an edgy grace in her voice, leaving a gap for fills from Tim Warren on guitar or Tim Broderick on drums. While their contributions build up a mosh-pit of fun, fiery sound, it’s bassist Cedric Canero that takes the cake for pushing that mountain of sound forward with some truly inspiring bass grooves.
Digging Deeper: “Skinny Dippin’ Scorpion” pulls no punches, especially on its opening track in “Worse Off.” The track bounces between a revving bass and a hypnotic guitar riff before making way for an echoing version of Lenau’s voice, filling the space with an inviting, but heavy wail. “Worse Off” creates this contradiction between being dangerously catchy in its demand for listeners to bounce between interesting elements and surprisingly heavy with lyrics that carry this burden of hopelessness and loneliness. That doesn’t stop tracks from being unapologetically fun, like “Fool-ish,” which leverages bright guitar riffs, brash drums and neon synths that propel the breaks between verses. “Fool-ish” feels like it unwinds itself as it plays out, exposing you to playful guitar work as well as some killer drum fills. It’s a track that is begging to be played live, but even in recorded fashion, it radiates the energy that Hollywood Makeout obviously put into it.
Perfect For: A high-energy Zoom detox, especially when cranked up loud. – Nick Moran
Website: https://www.facebook.com/HollywoodMakeout/
Listen: “Fool-ish” 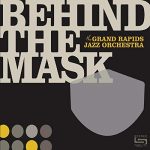 The Grand Rapids Jazz Orchestra
“Behind The Mask”

What Stands Out: The Grand Rapids Jazz Orchestra is a veteran group, featuring notable area musicians and jazz educators. They’ve created a solid, swinging recording that should appeal to any jazz fan, with a couple ringers for the uninitiated. The opening “Bebop.com” shows where the recording is going, with solid section-playing leading to a sax solo; the concluding “Bob the Bopper” is a kaleidoscopic tune with the various sections demonstrating vitality and offering space for soloists. Despite those titles, the music is not all bebop, but it is zesty and enjoyable. There’s swing, Latin, ballads, even one piece based on a children’s song: Robin Connell’s “Wiggle Worm.” And don’t get the idea that this is simply a vehicle for blowing, though it is that; many of the tunes offer toe-tapping melodies. “Morning Star” is a moody feature for Matt Sumner on flugelhorn. His rich, burnished sound melds well with the woodwinds and muted trumpets. It’s followed by the Latinesque “Pontaluna,” which gives Greg Marsden on tenor and composer Sumner plenty of room to roam.
Digging Deeper: While it may be a traditional big band, a couple of the selections are surprising. For example, saxophonist and co-leader Bob Nixon admits to a fondness for Emerson, Lake and Palmer during his formative years. Here he’s transforms ELP’s take on Aaron Copland into “Fanfare for an Uncommon Man.” It features keyboardist Steve Talaga channeling the late Keith Emerson through a solo incorporating another ELP/Copland classic, “Hoedown.” Another unforeseen but enthralling piece is Carlos Santana’s “Europa.” Tenor saxophonist Jim Hayward’s alternately mournful and rousing leads bring to mind the late Argentinean saxophonist Gato Barbieri without copying him (both Santana and Barbieri had a hit with the tune).
Perfect For: Anytime you want to experience various jazz moods, from soulful to spirited, swinging to bluesy to just plain fun. – Ross Boissoneau
Website: grjo.com
Listen/Watch: “Bebop.com” 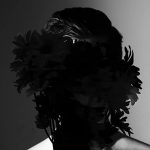 What Stands Out: Grand Rapids-based Aaron Senor is the musician behind the dream-pop solo act Dawning. “Petals,” the 4-song debut EP of the project, tells the linear story of an unhealthy relationship, starting out with the first song: “Bloom.” Senor’s layered harmonies and euphoric lo-fi beat on this track replicate the feelings of new love and the excitement to come. As the record flows on, the tracks transform to the realization that this love wasn’t all it was cracked up to be. The EP keeps up the energy with catchy choruses and a soft-synth atmosphere, that is, until Senor’s dad, Brian Senor, emerges in “Rose Hips” with an ’80s glam-pop inspired guitar solo. Senor concludes with “Rose Lights,” an acoustic low-key track reminiscing on the regrets, mistakes and memories of summer love.
Digging Deeper: “Petals” was written, produced and recorded in Senor’s room, emphasizing the personal importance of this collection of songs. Mixed by Jake Rye at the Social Recording Company in Adrian, the EP is a perfect reflection of its Michigan summer vibe. It’s safe to say that most Michiganders have that one summer spent with someone unforgettable, and “Petals” is the cathartic response to a short-lived love.
Perfect For: Fans of M83, The 1975, The Weeknd, Dayglow. – Liv Conaty
Website: https://www.dawningband.com/
Listen: “Bloom” 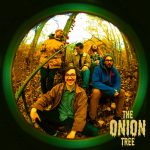 The Ryne Experience
“The Onion Tree”

What Stands Out: “The Onion Tree,” the fifth major studio release from the Lowell-based Ryne Experience, is quite the impressive feat. It manages to balance out comedic, whimsical, tongue-in-cheek lyrics with complex arrangements, catchy riffs and impressive production quality. The overall feel of the album is late 1960s British psychedelia, and Ryne Clarke’s vocals instantly conjure Lennon, perfectly capturing the whimsical world in which this album resides. The shimmery guitar work throughout the album is reminiscent of a cross between Mac DeMarco and George Harrison — and that’s quite alright with me.
Digging Deeper: Lyrically speaking, “The Onion Tree” doesn’t make profound claims or attempt to speak on deep truths of the human experience — and that’s part of the magic. Somehow, Clarke manages to create songs about mosquito bites, breakfast foods and alien abduction that are absolutely captivating. In doing so, he demonstrates his prowess as a sonic engineer and his incredible ability to create catchy melodies. My one major qualm with this album, however, is the opening track. The silly, spoken word “Song of the Onion Farmer” takes away from the overall strength of the record, and the album could stand alone quite easily without it.
Perfect For: Fans of late ‘60s British psychedelia; eating a ripe onion, freshly picked from the tree. -Tyler Gargala
Website: https://www.facebook.com/ryneexp/
Listen: “One From The Onion Tree” 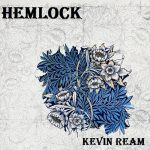 What Stands Out: “Hemlock,” the latest solo release from the prolific, East Lansing-based Kevin Ream, is far from being a one-trick pony. As a whole, the album could be listed under the indie-Americana umbrella. That being said, it covers a lot of ground within those parameters: the slow, dazed-out, dreamy “Head On My Heart”; the darkly psychedelic “Batten Down The Hatch”; the lazy, drunken, old-school country tune “A Thousand Pardons.” Ream’s vocal range is impressive (and is one of my favorite parts of the whole album listening experience), at times drawing parallels to the nasal crooning of Tom Petty and Neil Young, and at others singing in a deep, rich baritone that more closely resembles outlaw country legend David Allan Coe.
Digging Deeper: This album just sounds good, benefiting from Ream’s own skills as an experienced producer. Ream makes it a point to share that “Hemlock” was created during the 2020 pandemic in lockdown with social distancing. In addition to his solo career, Kevin is currently a member of the Lansing-based experimental rock band From Big Sur.
Perfect For: Fans of Tom Petty’s genre of chicken-fried rock; driving down a country highway with the windows down while pensively munching on a granola bar. -Tyler Gargala
Website: https://kevinream.bandcamp.com
Listen: “Worst Thing For Me” 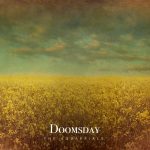 What Stands Out: “Doomsday” is the fifth full album from Mark Swanson, the man behind The Aquaerials, a Grand Rapids-based instrumental project. Diving into the album, it’s hard not to notice how much the music rings true to the record’s title. “The Skeleton’s Closet” introduces us to the dark, brooding, but beautiful piano tunes Swanson showcases throughout the album. But just as we’re getting settled into our haunted mansion of emotions, “Prelude for Time Feelers” transcends to a bright, airy place … before taking us back to a gloomy reminiscent piece called “The Lost Year.” This song would be the perfect soundtrack to a montage of life in 2020. Swanson closes out the album with a delightful cover of “Suicide is Painless,” by Johnny Mandel, from “M*A*S*H.”
Digging Deeper: “Doomsday” is a roller-coaster of emotions, setting the scene for a soundtrack that is malleable to anyone’s experiences. The album forces you to live out your own storyline within the instrumentals, whether that story be sad, frightening, hurtful, regretful or hopeful.
Perfect For: Taking a solo walk around your town, reflecting on what your story is all about. – Liv Conaty
Website: http://www.aquaerials.com
Listen: “Prelude for Time Feelers”